Poll: Does It Bother You That Brandon Roy Is In The Same Rap Video As Marijuana?

Share All sharing options for: Poll: Does It Bother You That Brandon Roy Is In The Same Rap Video As Marijuana?

This new video (lyrics NSFW), Cali & Cavalli's "What They Want", was a spectacular find by BlazerFan1 last night (via NBA Wrap.) There's a lot going on in the Seattle duo's latest video: some simplistic, repetitive rhymes about making money, a marginally addictive beat, some outdated mobile handheld device technology and, yes, blunt-making preparations. There's not much original about the song or the video, except for the fact that Brandon Roy --hugger of babies, pristine face of the franchise, NBA All Star -- bizarrely found his way into a cameo role. (As did fellow Seattle NBAer Jamal Crawford.)

Let's put it this way: Brandon Roy wasn't nicknamed The Natural for his ability to mean mug a camera. 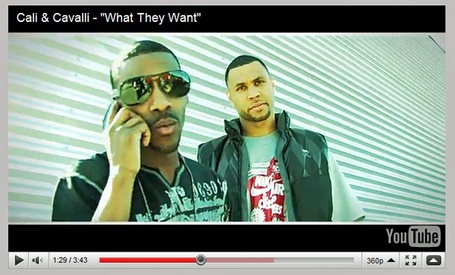 And, in this shot, Roy actually appears to be lost and asking for directions. 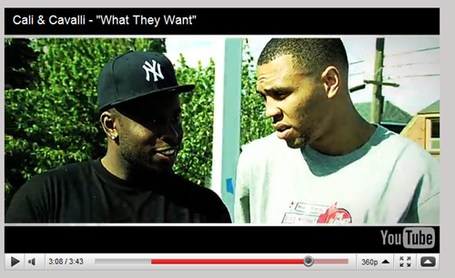 To be crystal clear, Roy never appears in the same frame as any drugs or drug paraphernalia. This screen grab shows the worst of it. 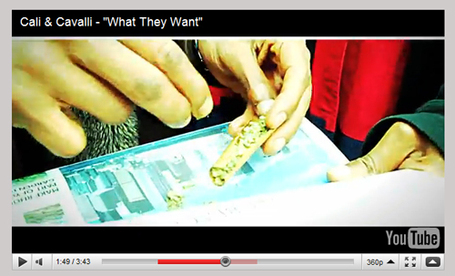 Whether or not Roy knew the content or context of the video he was participating in, it's out there now. He's a role model -- he knows that better than anyone -- and I can't imagine that Roy, his shoe company (he's wearing a Nike t-shirt), his organization or his commissioner is super thrilled about the final product. For a guy whose biggest "crimes" to date were charging for his autograph and praying by himself during the National Anthem, this will inevitably draw a new kind of criticism, warranted or not.

When I watch this video, I see a nice guy (somewhat awkwardly) trying to support two local artists on their path to financial success ("We gettin' money out here") and, in the process, walking into a field of landmines he has no business being anywhere near. I also see some serious unintentional comedy. Of course, I realize not everyone will see it that way.

Does Brandon Roy's appearance in this video bother you? Please vote and explain why or why not in the comments.