What do you expect when you put four basketball lifers on a stage together during the middle of the summer? A lot of stern faces, bored glances, forced smiles and compliments.  That's pretty much what we got during yesterday afternoon's press conference introducing three new assistant coaches for the Portland Trail Blazers: Bernie Bickerstaff, Buck Williams and Bob Ociepka.

Head Coach Nate McMillan introduced all three individually but first he acknowledged that he was glad that the hiring process -- which dragged on for more than a month -- had reached its conclusion. "I first want to say thank you for coming and... finally. There's been a lot of conversation about my staff over the last few months and after going through some interviews and having a short list of coaches that I wanted to talk to, I felt I was able to get that balance, that chemistry that I had lost during the month of June when I lost Monty Williams and Coach Lucas."

McMillan also took the unusual step of confirming that the leaks about his staff that came out during Summer League were accurate. "I came up with a staff that has pretty much been in place for a few weeks. We couldn't get them signed because [Blazers President] Larry [Miller] was in search of a GM at the time and they had to be patient and they had to trust me that we would get it done. Because, again, they did have some opportunities."  Those opportunities included a potential job offer with the Clippers for Bob Ociepka.

Click through for a full look at each of the three new assistants, including pictures, McMillan's take, the funniest exchanges and some final thoughts.
-- Ben Golliver | benjamin.golliver@gmail.com | Twitter 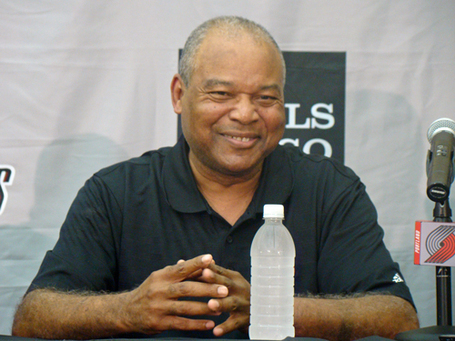 The only real tension yesterday was between McMillan and Bernie Bickerstaff, his first head coach in the NBA who, some twenty years later, is now part of his coaching staff.  McMillan's introduction of Bickerstaff, for the most part, was fairly bland but he did take a jab at Bickerstaff's advancing age.

Later, Bickerstaff admitted to a television reporter, "I'm a geezer. I'm ok with that," which drew some chuckles.  While he ceded the age argument, Bickerstaff didn't let McMillan's crack go unanswered.  Indeed, when Bickerstafff gave this recollection of drafting McMillan for the Sonics we saw McMillan as embarrassed as he's been since he apologized for the Andre Miller blow-up.

I thought we made a mistake when we drafted him. That was the year we didn't have a first round pick... We drafted Nate and our PR guy didn't really do a good job in terms of the highlight film. So we walked out on stage with the second round pick, we got booed, we announced Nate McMillan and then we showed the highlight tape. The highlight tape showed Nate missing shots, throwing the ball away, he fell, then after I went to watch him workout after we brought him on board, he could hardly move because he had severe tendonitis.  I asked Nate, "Can you dunk or touch the net?"

But the one thing about Nate is, he is cerebral. I figured out how to guard Kevin Johnson, all the quick guards, he figured out the angles. He was the guy who was getting the ball to Dale Ellis.  That team that we had -- we had probably three 20 point scorers on that basketball team but the catalyst of that basketball team was Nate McMillan. I just feel honored and privileged to have the opportunity to work with him again.

This picture, taken during the story, says it all. 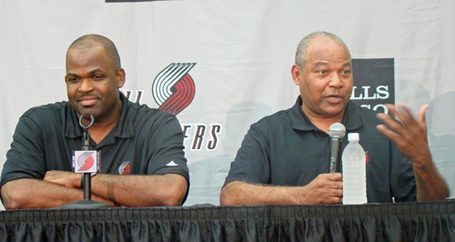 Bickerstaff eventually circled back around and did a straight-forward job of explaining what he brings to Portland, none of which came as much of a surprise.

Being honest. Being loyal. Saying the right things. But there's a way you have to put it. What I thought my job was with Nate is to try to provoke thought.  I think as an assistant coach you have to be careful you're not inundating that head coach. What I've been telling Nate is that this is a good basketball team. I think the changes have to be really subtle.  We're coming in to assist him, not to make any drastic changes. He'll get a different voice, an honest opinion. 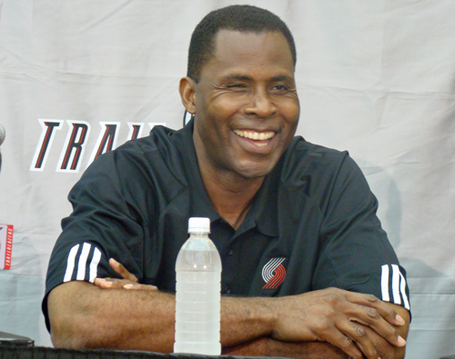 It's pretty clear that retirement hasn't changed Buck Williams much.  As steady and focused as ever, Williams talked at length about his "approach" to the game, about his work ethic, maximizing his abilities, his dedication and consistency.

When I retired I didn't win a championship. I see this team in its prime with a lot of talent on this team. A great organization, great community... I couldn't think of a better coaching staff to coach. I bring a certain mindset to my approach to basketball.

It's not so much about the on-court play, it's about getting the right approach to the game. Imparting the knowledge you have of the game to the younger players. That's what I hope to bring to the coaching staff.

McMillan also sees Williams as someone that can set the right tone of hard work.

I don't really have to talk too much to him about our fans.  I had the opportunity to play against Buck. There's always been a great deal of respect for Buck and his approach to the game. I know what he's capable of on the floor. When I had the opportunity and found out that he was interested in coaching I definitely felt that he could bring something to the coaching staff. Teaching not just our bigs but our team on how to play the game, and how to play the game the right way.

While Williams received questions about how he might help Greg Oden, with whom he shares the #52, I couldn't help but think perhaps the coaching staff was planning to sic Williams on LaMarcus Aldridge, who had an iffy reputation as a worker last season and backed out of Team USA this summer.  Take a look at this line from Nate McMillan.

If Aldridge has gotten knocked for anything over the past two seasons, it's for not being a "true" power forward and not pulling down Buck Williams type rebounding numbers.

Unrelated to anything: Williams was rocking some crazy black mesh dress shoes that looked like a combination of Bostonians and Water Socks. I couldn't make that up if I was trying. 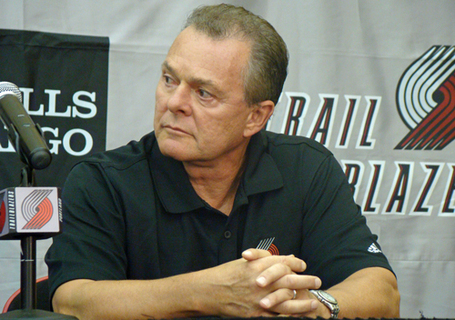 With Bob Ociepka, the first impression is that his body is composed of hardwood.  Nate McMillan admitted he didn't know Ociepka personally before this summer but said he had heard good things.

He's a coach in the sense that he gets excited when he talks about basketball. He was talking to me about the game, and what he felt he could bring to the staff, I could hear the excitement in his voice. Bob did have another opportunity to coach with another team and he chose to come here to be a part of my staff and I'm really happy he made that decision.

Ociepka is being pitched as a defensive guru but, as noted with Bickerstaff about a month ago, the numbers don't really jump out at you.  Yesterday, Ociepka highlighted his time under Terry Porter in Milwaukee (from 2003-2006) and emphasized the improvement those teams showed defensively.  According to John Hollinger's team statistics: in 2004, Milwaukee was 24th in defensive efficiency; in 2005, Milwaukee was 28th; in 2006, Milwaukee was 24th.  (For a longer look at his team's defensive ratings, click here.)

His most recent stop, in Chicago, had better results, with the Bulls finishing in the top 10 in defensive efficiency last season. Ociepka was careful yesterday not to personally claim any credit for that success, dutifully putting the results back on the coaching staff as a whole and his head coach in Chicago, Vinny Del Negro. He came across as much more of a humble advisor rather than a defensive coordinator.  Asked to describe his personal philosophy, he said...

It's a system based on warring cutters, blitzing pick and rolls, a toughness mentality that carries a long way.

What's more likely: that philosophy goes quietly into the night or Nate McMillan re-thinks his defensive approach in a make or break year?

Putting aside the potential magnitude of his strategic impact, it was also clear Ociepka was salivating a little bit at the defensive pieces on Portland's roster.

I look at this team. We're excited about coming into this situation, looking at the personnel we have and what they can do. The length, the size, what was accomplished last year with all the injuries. We're very excited about it.

Ociepka has written two books about basketball plays.  I ordered them yesterday.  Full breakdowns coming once they arrive.

It's more clear than ever that next year will be Nate's way or the highway, regardless of the new faces.  While McMillan did say that he was "open" to potential changes and "new ideas" from his assistants, he didn't oversell a new direction. "It's not going to be a drastic change. We're not broken. We've done some good things. I think the major thing for the team is if we can stay healthy. I haven't seen my team."

At the very end of the press conference, McMillan was asked an innocuous question about any funny memories he had of Bickerstaff and what it felt like to have his former coach on his bench.  McMillan's defensive tone took some people by surprise.

This is my team. As Coach [Bickerstaff] said, they will be assisting me. I know what I want to do.

For me going into my sixth year, I want to get to the next level. As I've said all along, coming into Portland, Mr. Allen gave me the opportunity to come in and rebuild the team, I feel we've done that. We've gone through that period of developing, we feel we have a team that can win. And we want to win big.

The response felt knee-jerk, a reclamation of authority when it hadn't even been questioned. In an interview with a television reporter afterwards, McMillan expressed surprise that no one had asked him whether he had made the decision to change his assistants or if the decision was made for him by those above him on the corporate ladder.  He then said, of course, that this was his staff and his decision.