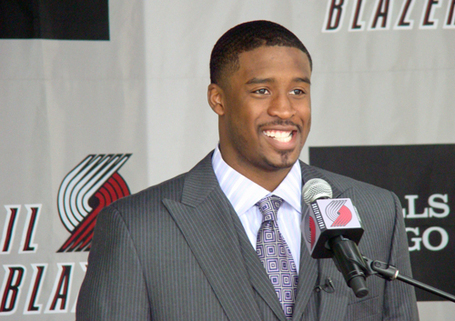 The Portland Trail Blazers introduced the star of their summer free agency -- guard Wesley Matthews -- in a short and sweet ceremony at a park in North Portland Wednesday morning. "When we looked into the free agent market, the guy that we targeted is the guy we ended up getting," Blazers President Larry Miller said.  "We're thrilled to be here today to introduce to you the newest Trail Blazer, Wesley Matthews."

Matthews, wearing a white and purple shirt and tie combination, began his remarks by thanking the Utah Jazz organization, who brought him into their 2009 training camp after he went undrafted out of Marquette. "For me as a person and as a player, to embrace the present and prepare for the future, I feel you have to acknowledge the past. I really need to thank the Utah Jazz for giving me this opportunity to live my dream out and be an NBA player. The fans of Utah embraced me, the coaching staff, the organization trusted me, my teammates trusted me as a player, and soon we came friends and I just need to thank them for all that they've done."

At virtually the same instant that Matthews was taking the high road, Salt Lake Tribune beat writer Ross Siler took to twitter to blast Matthews and his agent, joking that there was "no giant vanity check unfortunately" at the ceremony and claiming that the Jazz were left stranded during the negotiation process. "This is getting ridiculous as far as what Wesley Matthews is claiming. Jazz were strung along in negotiations for close to two weeks... Jazz tried to set up a meeting in Orlando during summer league to talk contract," Siler tweeted. "They were blown off. Next day Wes was flying to Portland."

Hell hath no fury like a franchise scorned, apparently.

The negotiations and the final price tag for Matthews's services remain the biggest storyline around his acquisition, bigger than his rise from undrafted to playoff starter and bigger than the touching story of his relationship with his mother.  Yesterday, Kelly Dwyer suggested Matthews was worth $10 million, and yet the Blazers reportedly gave Matthews a 5 year contract worth $35 million, using their entire mid-level exception on a player who will almost certainly come off the bench.

No one was sure how Matthews would answer the inevitable "Are you overpaid?" question. "My answer to that is that I'll be in the gym," he said this morning. "I appreciate the money. I appreciate it more for my family. The money is for them, this game is what's for me. I love this game and before I signed, I said this money isn't going to change a thing about me. A lot of people respected what I did because of how hard I played, how hard I went. That wasn't to get a big contract like this. This big contract helps my family out. I'm alright as long as I play this game."

He then admitted that the criticism of his contract might be valid.

"People that say I'm overpaid -- I might be. We never know. I know one thing is that I'll be in the gym and I'll be working to give myself a chance to be the best that I can be."

Matthews talked about his defensive abilities and toughness but didn't know exactly how the Blazers plan to use him.  It's assumed he will be back up Brandon Roy and Nicolas Batum but Matthews wasn't ready to concede that. ''I'm not sure what the role is. They want me to come in and I'm going to play. Whether that's backing up Brandon, whether that's playing alongside Brandon, I'm not sure... That's what training camp is for, that's what preseason is for."

While the jury is still out on whether he can meet the expectations that go along with his contract, there is no questioning Matthews's charisma, moxie or attitude.  Reports about his great personality have flooded out from Utah over the last 10 days or so and he lived up to that billing this morning, addressing reporters and fans directly, respectfully, thoughtfully and patiently.  He handled a question about Portland's front office drama brilliantly.  "There's turmoil everywhere, any job," Matthews joked. "Whether it's basketball or banking. There's turmoil within any business. That's just part of business."

Watching the morning play out, Mike Born's words from last week -- that Matthews is "a terrific fit for us. He's everything we're about. He's a great kid, a great worker, a great teammate" -- were playing on repeat in my head.

There are legitimate doubts about Matthews's value and worth -- and legitimate questions about his fit on the roster -- but none of them are coming from Portland's side.  They remain tickled to have acquired his services and have no regrets about the price. 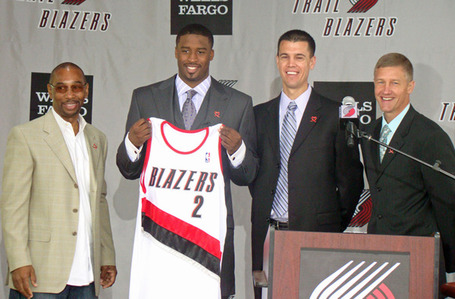 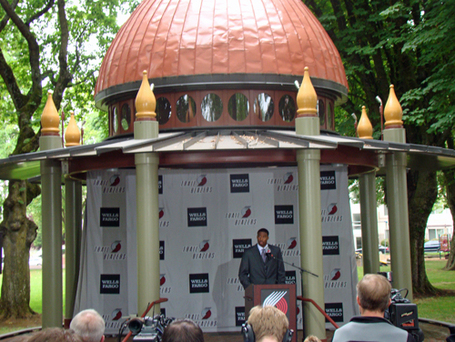 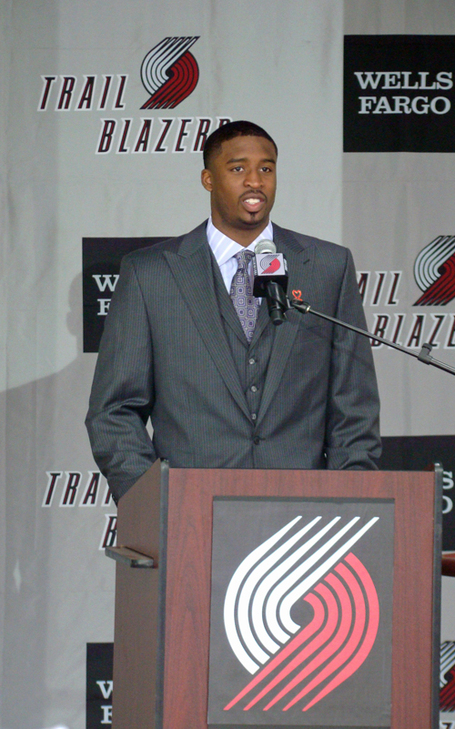