This afternoon, the Blazers held a press conference to introduce their new crop of rookies: guard Elliot Williams from Memphis, forward Luke Babbitt from Nevada and guard Armon Johnson from Nevada. 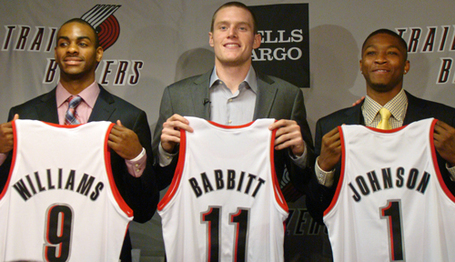 A few brief notes. Williams will travel to Summer League but will not play due to a bumped/bruised knee suffered during a pre-draft workout for the San Antonio Spurs. This decision is being labeled "precautionary" and he is fully expected to be ready for training camp.  Second, Chad Buchanan said he expects Patty Mills to play for the Blazers in Las Vegas during the Summer League and that the team is waiting on some paperwork to finalize the decision.  Within the next few days it should go official.  Mike Born also confirmed Ridiculous Upside's report that Demetris Nichols will be playing for the Blazers in Vegas.

Lastly, as Jason Quick reported over the weekend, the Blazers appear poised to release Ryan Gomes. The Blazers said today that they would continue to follow up with a few teams that have expressed interest in Gomes today but, when pressed a little bit, said they had no solid offers on the table and they seemed somewhat doubtful that anything would develop. They said all options would remain open until tomorrow's deadline.  Earlier this morning, there was a report that provided information regarding a large trade exception and cap space to be gained by waiving Gomes. That report was incorrect. Mike Barrett does a really nice job summarizing the financial benefits to the Blazers of waiving Gomes.

Later tonight or tomorrow morning, I'll have a bunch of thoughts from the scouts on how these guys will fit into the roster next year.

But first, click through for some pictures and first impressions to get yourself acquainted. 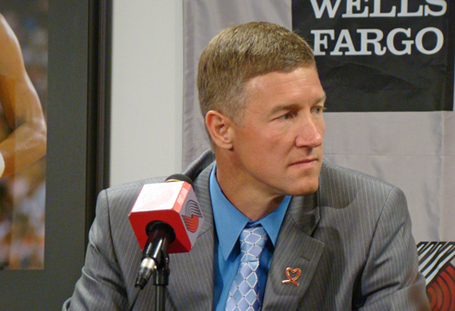 Mike Born was pretty serious throughout.  Chatting afterwards, he said this year was slightly different because, with Kevin Pritchard's absence, he didn't get his customary post-draft recovery time.  Nevertheless, he was excited about putting the finishing touches on the Summer League roster and said he felt confident stepping in for Pritchard this week because KP included both Born and Buchanan in so many of the talks with other teams in the past. 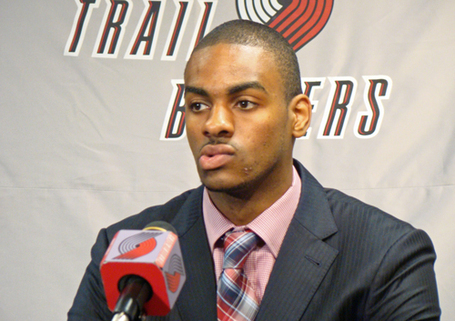 A few years ago, we seized on the "Bayless Face" and today we got a long look at the "Elliot Williams Face." Half the shots I took of Williams today had this exact same look.  I'm not entirely sure what emotion that is.  Williams is a very straightforward communicator with a strong, clear voice.  He talked at length about his time at both Duke and Memphis.  His game continues to draw comparisons to Bayless. 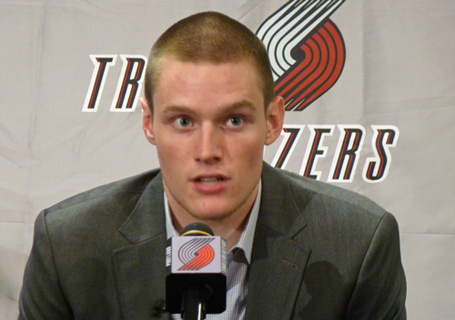 Luke Babbitt got a really nice haircut.  I definitely approve.  If there was a headline regarding Babbitt today it was Chad Buchanan comparing him to Travis Outlaw in his ability to create his own shot from a number of different places on the court. In keeping with the "trout" history, I propose "halibut" as a nickname for Babbitt. 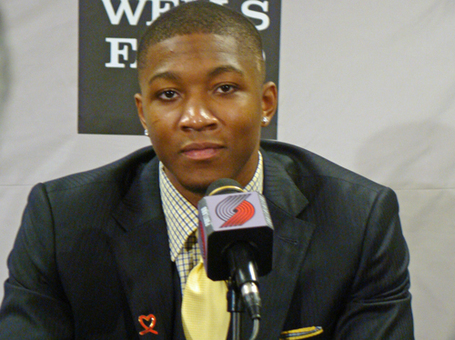 Armon Johnson was the happiest guy in the room (until we get to the next picture, that is) and made sure everyone was clear: it's pronounced AR-MOHN.  I wrote at length about this during the pre-draft process but he doesn't lack for confidence in his abilities.  There was some teasing between Johnson and Babbitt because they've known each other since elementary school. His game was compared to Greg Anthony. 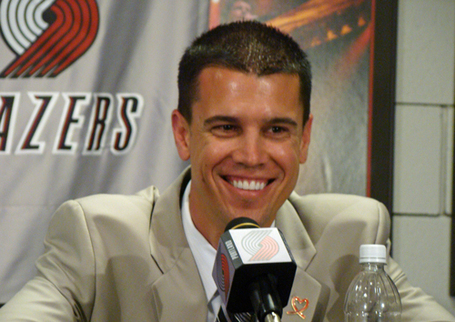 What a difference 72 hours makes for Chad Buchanan.  I wrote on Thursday that nobody is more excited to have this draft class than the two scouts because the prospects were so clearly on their target screen.  Last week, the exctiement was manufactured due to the exhaustion from the draft process and also the emotional weight of KP's departure.  Today, it was nothing but smiles for Buchanan, who briefly listed the strengths of each rookie and stayed long afterwards to patiently answer questions.  Buchanan was careful to thank the entire scouting staff by name and said that he is enjoying wrapping up this process, but he admitted with a smile that he can't wait to get back to the scouting trail himself.  If there is a single fact about Chad Buchanan that you should commit to memory, it's this: he is doing exactly what he wants to do and exactly what he was born to do.