One day after publicly announcing a "Keep Kevin Pritchard" draft night rally to Blazersedge, the Associated Press, The Oregonian and appearing on 95.5FM's Bald Faced Truth, rally organizer Brian Libby has decided to cancel the event, scheduled for tomorrow afternoon in Tualatin.

Libby writes on twitter that he has "gathered some intelligence that the rally would have done more harm than good."  Reached by phone this afternoon he did not want to disclose publicly who contacted him or what information was presented but he repeated multiple times that he now feels like the rally might have backfired on his stated objective, to keep Kevin Pritchard here in Portland. "I was given reason to believe that a public spectacle was not the way to do it," Libby said.

While Libby trashed the "LeBron James to Portland" rally yesterday, calling it "a joke," he realizes now he's set himself up to be a punchline with such a quick about-face. "I apologize if I've misled or angered anyone, but I feel I have a strategic reason for doing so." He also claims he isn't "backing down" and that cancelling the event was simply "a change of tactics."

"I will never back down to anyone when it comes to supporting Kevin Pritchard," Libby said. "Even if [cancelling the event] makes me unpopular or people see me as wishy washy. I'm just a fan and I'm trying to make the best decision I can."

He believes his rally cry still served a purpose, even if the rally never actually took place. "The Blazers and Vulcan are still getting the message and that's what important. It's really delicate and it's hard to know how to influence an owner like Paul Allen who sometimes seems crazy to a lot of us."
Libby now encourages fellow Kevin Pritchard supporters to contact the organization via email.  That will definitely work. 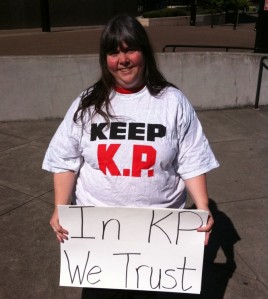 Congratulations to this woman for not giving in to "intelligence" and standing up for what she clearly feels passionately about.