Last year, I came up with the Draft Prospect Board as a way to organize the team's interest in all the players that came through for pre-draft workouts. Although it seems like forever ago, you might remember that the Blazers had five picks last year and had a bunch of talent come through for workouts: Ty Lawson, Darren Collison, Omri Casspi and Tyler Hansbrough, among others. Now that the Blazers have completed their pre-draft schedule, it's time to do the same thing for this year's group. Here's the goal...

This board is not an attempt to predict who the Blazers will select, who will be the best professional or who is the best player today.  Instead, this board aims to answer the question "Who would I be least surprised to see drafted by the Blazers this year, regardless of pick?"

Remember, this board doesn't necessarily aim to predict who the Blazers will select because it only covers those players that worked out in Portland.  For some perspective, realize not one player in Draft Express's Top 20 worked out in Portland this year.  So if the Blazers are planning to trade up, as is rumored, it's almost certainly to draft a player who didn't work out here.  We'll look at potential targets later this week.  For now, we're ranking the guys who came through Portland based on the likelihood that they wind up Blazers this year.

Here's last year's Final Board.  It's pretty interesting. Jeff Pendergraph is right near the top. It was pretty much impossible to miss his ties to Nate McMillan, his enthusiasm for the team and situation, the skillset that he brought to the table and the team's interest in his steadily improving body of college work.

Dante Cunningham, though, was on previous versions of the Top 10 before finding himself bounced off at the end.  This was primarily due to my misreading of Kevin Pritchard's comparison of Cunningham to Travis Outlaw.  At first read I concluded that Pritchard might be hinting that there was too much overlap between Cunningham's skills and Outlaw's.  As we came to find out, what he really meant was, "Cunningham is 80% of the player that Outlaw is at 20% of the price."  Really, the Cunningham/Outlaw situation is the best representation to date of the "Value Over Replacement Player" strategy that Pritchard has more completely explained over the past year.

This year, the Draft Prospect Board is arguably less meaningful than it was last year. Why?  First, less talent has come through Portland.  Second, more observation has takent place outside of Portland.  Third, the Blazers have just two picks instead of five.  Fourth, because it's a lot less clear than last year who is calling the shots when it comes to the draft.  None of those reasons stopped me from cranking out 4,000 words here.

What were the guiding principles behind this year's rankings?

First, draft positioning was weighted heavily.  If a prospect can be reasonably drafted at both #22 and #34 that gets a bump.  Two cracks at drafting a player are better than one.  If a player is likely off the board at #22 or a reach at #34, that's a minus.

Second, positional needs were weighted considerably.  While the team retains its "Best Player Available" mantra, you can see a heavy slant towards forwards and upperclassmen in this year's workout group (see the "By The Numbers" breakdown near the very bottom of this post).  From everything I've seen and heard over the last six months, that's no accident.  Also, fitting a specific position is better than lacking a position. Purer fours get a bump over combo 3/4s.  Purer points get a bump over combo guards.  Versatility is valued, as long as the player has a specific position to start from.

Third, players with a defined skillset get a bump over players that represent "potential." With so few roster spots, let alone minutes, up for grabs, the Blazers scouts have repeatedly made it clear they are looking for guys who are ready to go from day one and are known commodities. System fit was also taken into consideration.  If a player is used to running, comes from a free-flowing offense, has a quick trigger or needs a lot of touches to get going, those are all warning signs for their potential fit here in Nate McMillan's Portland.

Psychological or background red flags were also considered.  This year, they didn't play a huge factor, although Willie Warren self-selected his way off of this list by cancelling his workout entirely.  Thanks, Willie! On the other hand, if a player was specifically praised for having high character, that might have served as a tiebreaker.

Without further ado, click through for this year's Draft Prospect Board.

Here is this year's Draft Prospect Board.    Click on each player's name for their Draft Express profile.  Continue reading below for quotes and observations from this year's workouts.

As you can see, 7 of the 10 names on this list find their way onto the Draft Prospect Board above.  Let's take a quick look at the three guys that didn't make the cut.

Art Parakhouski worked out this morning and, while humongous, doesn't fit the mold of a Blazers center that we've become familiar with.  His short-range jumpshot form was really bizarre, as he pointed his toes during his release like a ballerina.  His entire shooting form was a mess although that's not usually the first thing you look at when evaluating centers.  While it's not inconceivable that the Blazers draft a center, this bruiser will need some minutes to develop.  If the Blazers drafted a project center, I'd expect it to be someone with greater athleticism or at least someone who is able to come out to the perimeter to set screens and be something of a face-the-basket threat on occasion.

Ben Uzoh is in a similar mold to Coleman: a talented off-the-dribble combo-guard with some questions about his shot and bigger questions about his ability to be a full time point guard.  I'm reading a little between the lines on some of the comments Buchanan made after his workout. Buchanan just didn't seem confident that Uzoh could be plugged into their backcourt rotation and do what a 4th or 5th guard would be asked to do on this team.  Same goes for Coleman.

Being left off the Draft Prospect Board isn't a knock on the NBA potential for these players, it's just a judgment on their fit in Portland.  Here are a few other guys that were on the outside looking in.

Tiny Gallon:  Fattest person ever to be nicknamed Tiny.  Came out from college to early, weight concerns, short for his position, hard to see him fitting here.

Samardo Samuels: Could become a very good NBA player, eventually.  Came out early, doesn't seem to have the immediate NBA readiness the Blazers are seeking, and admitted that he hasn't received much, if any, advice from his college coach regarding the draft process.  Very soft-spoken, nice guy but it's not totally clear what the specific attraction for the Blazers would be.

Workout Attendees By The Numbers

In case you're interested, here's a breakdown of the full list of June workout attendees by Draft Express ranking, experience and position.  This list includes only players with workouts that were open to the media. 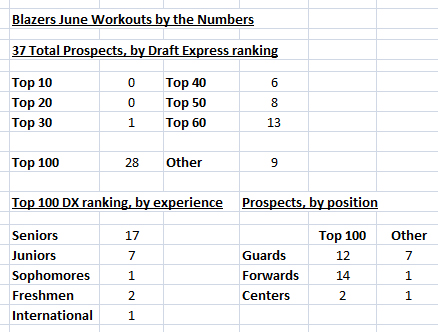 And here's the full list of June workout attendees in alphabetical order.  Their Draft Express rank is included when available.