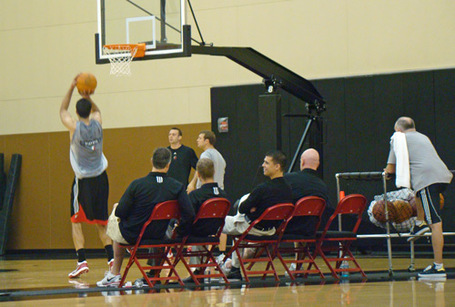 Before we look at the prospects, the biggest story in the gym was Williams, who is seen as one of two finalists for the New Orleans Hornets head coaching position. "I'm really flattered that I get the opportunity to talk about being a head coach," Williams told a media pack this morning. "As of now, there's really nothing [new] to talk about."

Asked about a Yahoo! report that Chris Paul wants Williams to be his next head coach, Williams smiled and joked, "I'm hoping Brandon Roy still wants me to coach him. I'm flattered, I didn't hear that from Chris. I didn't see his quote, so I don't know if that's accurate. But it is pretty cool that you have maybe the best point guard in the game wanting to work with you."

Williams, as always, was measured and careful in his comments but did sound like he was happy with how he is positioned around the league. "I think head coaching has an eye on you," he said. "It's not something you can get an application and go fill it out. I think the league picks you out. For me the opportunities have opened up and I'm just thankful."

Kevin Pritchard did not take any questions immediately following today's workouts.  But here are some takeaway thoughts culled together from discussions in the gym today and other correspondence with various NBA people over the past week or two.

Today's Participants
Frankly, none of today's prospects jumped out as being particularly NBA ready despite all 6 being 4 year college players.  As mentioned before none of these six players are currently slated to be picked in this year's draft according to Draft Express's most recent mock draft.  But here are some quick thoughts on each.

Tory Jackson: A four year point guard at Notre Dame who shot 60% on free throws.  Displayed questionable shooting form today and his bricks sent his fellow workout attendees chasing all over the gym on multiple occasions. Solidly built, he got some extra attention from Dean Demopoulos and seemed to have an engaging personality.  Didn't look like an NBA player.

Landry Fields: Stanford grad and son of a former NBA player, he led Pac-10 in scoring as a senior.  Does not have NBA athleticism.  Looked slow laterally and struggled under ball pressure during drills, turning it over multiple times. Good personality and good interview, but the SoCal native praised the Blazers but also noted that he was a Lakers fan and was rooting for them in the Finals. Come on, brah.

Marqus Blakely: One of today's attendees ranked in Chad Ford's top 100 prospects at #72. A 6'5" four year guard/forward from Vermont. Chad Buchanan told reporters today that he's still figuring out how to play against NBA size and quickness given the relative lack of quality competition in his college conference.  His stats from college (19 and 11 as a college sophomore) look overwhelming on paper but he looked fairly unremarkable today.

Andy Rautins: Buchanan praised his catch-and-shoot abilities and noted that his father is the head coach of the Canadian national team. Seen as a worker who improved his game over four years at Syracuse. Lacks some of the physical tools that have helped JJ Redick carve out a niche in the NBA. Update: Earlier, I overlooked Rautins at #62 on Ford's list. Draft Express has him at #89. Sorry about that.

Ryan Thompson: Younger brother of the Sacramento Kings' Jason Thompson.  Arguably put up better overall numbers than his brother at Rider but is shorter/smaller and looking to play on the perimeter in the pros.  Another player with questions to answer when it comes to quickness, ability to score against NBA competition, etc.

Tyren Johnson: A small school combo forward from Lousiana-Lafayette who could enhance his game with improved outside shooting. With true 3 point range he could pose greater challenges to NBA defenders. Seen as something of a project who will go undrafted but has some longer-term NBA potential given his size (6'8") and athletic tools.

Joe Freeman has more on each prospect.

PS Programming note: The Full Court Press will be up tomorrow morning.