Share All sharing options for: Nicolas Batum: Prince of the Chase-Down Block

Thanks to reader Aaron for passing along a link to this feature on Lebron James's "chase-down blocks" by Jonathan Abrams in the New York Times.  Abrams writes...

The chase-down block is the defensive equivalent of one of James's dunks, and it is becoming his signature play. The sequence begins with James in the backcourt as a fast break develops for the opposition. James's speed enables him to make up ground, and his size and athleticism allow him to come from behind and block the layup or dunk attempt. Because James is one of the few players who can block shots this way and the only one who performs it regularly, the chase-down block is a statistical category he has mostly created on his own.

Aaron's reason for sending the email: Where's the love for Nicolas Batum?  Is it really accurate to say that LeBron is "the only one who performs [the chase-down] regularly?"  Aren't we overlooking a certain Frenchman with a proposensity for wiping out transition layups?  Great question, let's investigate.

According to the article, the Cleveland Cavaliers assistant coaches track this type of play over the course of the season: James had 20 chase-down blocks during the 76 regular season games he played this year.

To compare Nicolas Batum to James, I reviewed videotape on My Synergy Sports of every shot that Batum blocked this year.  I used a strict criteria for determining what was and wasn't a chase-down (determining this type of thing is a little trickier than you might imagine).  My criteria were as follows...

Of course, Batum was limited significantly by a shoulder injury this season and played in just 37 games, starting just 25.  Nevertheless his numbers are pretty remarkable.  Batum executed 5 chase-down blocks. Here's his victim list:

That block against Williams was one of the most memorable highlights of the season.  Let's pause this boring analysis for a minute and watch that play like seven times in a row.

Alright, time to compare James and Batum side by side.  Here you go...

The numbers tell us that LeBron James is indeed the Chase-down King.  But they also make a fair argument for Batum as Prince.  (Atlanta's Josh Smith and others likely deserve to be in the court too.)

James played a total of 2,966 minutes averaging 39 minutes per game. That translates to 1 chase-down every 148.3 minutes.  Given how many minutes he plays that translates to roughly 1 out of every 4 times he took the court this year.  That's simply incredible.

Batum obviously doesn't play nearly as many minutes as James when healthy, let alone when coming back from shoulder surgery and working his way back into the starting lineup.  But when you breakdown chase-downs on a per-minute basis, you see that Batum doesn't trail James by all that much.

Extrapolating a 37 game sample into a full 82 game season is tricky and unfortunately I don't have access to last year's numbers to determine Batum's chase-down block rate over a full season.  But if our initial goal was to present evidence that LeBron James is not the only NBA player to execute a chase-down "regularly" I think we've met that goal.

Batum vs. The Blazers

For those unimpressed by Batum's 5 chase-down blocks, here's some perspective.  After reviewing Synergy tape of every blocked shot by all 18 other Blazers this year (including Shavlik Randolph, Travis Diener, Anthony Tolliver, etc.), his teammates combined for a grand total of just 4 chase-downs.  In a combined 18,938 minutes.  That's one every 4,734.5 minutes.

Dante Cunningham snuffed out JJ Barea.  Martell Webster swatted both Anthony Carter and Chris Douglas-Roberts.  And Brandon Roy was credited with a block on Jason Terry on a weird play that may or may not have been scored properly (but a play that fit all the criteria I outlined above).  That's it.

The nearest-misses: LaMarcus Aldridge blocked a Zach Randolph layup attempt from behind, but only after Randolph pumped and fully gathered himself to shake off other Blazer defenders.  And Marcus Camby was credited with a block on a play where he stripped the ball from behind at waist-level as Ron Artest was going in for a layup.  Otherwise, absolutely nada.

Here's a chart that hilariously reinforces Batum's singular dominance of this category.  (Numbers pulled from Basketball-Reference.) 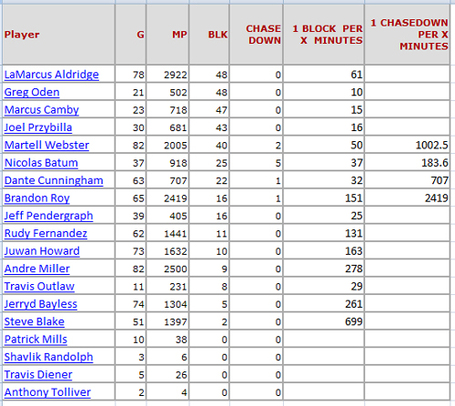 While the chart above is more conversation piece than serious tool, it perfectly reflects the unique combination of skills required to execute a chase-down block described by Abrams: length, speed, vertical jump, and instinct.

While they certainly have sufficient length, the Blazers bigs (Camby, Oden, Przybilla, Pendergraph, Howard) do not possess the necessary closing speed.  On the opposite end of the spectrum, Blazers guards (Bayless, Fernandez) might possess the closing speed but don't have significant length to challenge shots on the run at or near the rim.  We're left with the guys (Miller, Blake) who simply can't get vertical, don't have the coordination (Outlaw), or never really saw the court (Mills, Randolph, Diener, Tolliver).

The remaining group of Blazers with sufficient length, speed, ability to elevate and instincts include the four names you would expect: Batum, Webster, Roy and Cunningham.  What separates Batum from the others?

Chase-downs almost always occur after one of two things happen: a Blazer turnover or a Blazer missed jump shot.  Given what we know about the Blazers offense, both of those situations would tend to favor the small forward, particularly the starting small forward.  Why?  Being off the ball is key.  If your momentum and/or attention is directed at the basket during or immediately after a shot, it stands to reason you are not getting a head start getting back on defense.  Because a steal is generally unexpected, the player who commits the turnover regularly hesitates just long enough to be a non-factor going the other way.   Closing speed can help make up for either of these situations and no Blazer has the same high-end closing ability as Batum.

Unit personnel is also a critical factor here.  Who is taking the shots and where are they coming from?  As the small forward playing alongside Brandon Roy and LaMarcus Aldridge, you're likely to find yourself on the weakside for a fair number of long misses.

What makes Batum's numbers here all the more impressive is that the Blazers committed the second fewest number of turnovers per game in the entire league.  Playing with a Monta Ellis or a Steve Nash could do wonders for his chase-down numbers.  On this same point, I suspect that some of LeBron's chase-down blocks were the result of covering up his own turnovers (he averaged 3.4 per game, top 5 in the league).

Also interesting is that both Cleveland and Portland play at an extremely slow pace: Cleveland is 25th and the Blazers are 30th.  Up the tempo, up the turnovers and quick shots and, theoretically, you would be upping the potential for chase-down blocks as well.

Given the lack of turnovers and slow pace, one could argue that Batum's chase-downs are occurring in just about the most difficult petri dish possible.

Reviewing video of every blocked shot by the Blazers this season in search of chase-downs had an unintended consequence: I appreciate defenders that get back in transition more than ever before.

Martell Webster is a great example.  Although he had just 2 chase-down blocks all season, he actually had 10 blocks in transition situations.  These came in a variety of ways and with varying degrees of emphasis but the basic formula was: Blazer shot goes up, Webster rotates back on defense properly, opposing guard looks to push tempo, Webster waits for him in the key and challenges the shot.  Occasionally it was spectacular, other times it was ugly, other times it was forgettable.  But that type of commitment is what helped Portland keep the pace down and dissuaded its opponents from pushing the ball down the court.  It won't make SportsCenter but it will win games.

Abrams starts his piece by comparing chase-down blocks to dunks, but I'd like to amend that slightly.  Chase-downs are more like an alley-oop: a select group of players can execute one, the degree of difficulty is very high, a number of situational factors must be just right for it and, in the end, it's more of a novelty rather than a sustainable strategy.  Only in the rarest of cases -- Tayshaun Prince on Reggie Miller -- does the chase-down have game-changing potential.  But, like an oop, it will always draw oohs and aahs.  Just ask Deron Williams.

PS If you, like Aaron, have questions or situations you'd like investigated just shoot me an email.