Blazers Head Coach Nate McMillan addressed reporters for the final time this season at the Practice Facility today.  As you might expect, he wasn't subject to the same grilling as Kevin Pritchard.  McMillan appeared very relaxed and casual and spoke as if he was actively avoiding saying anything that might be headline-worthy. 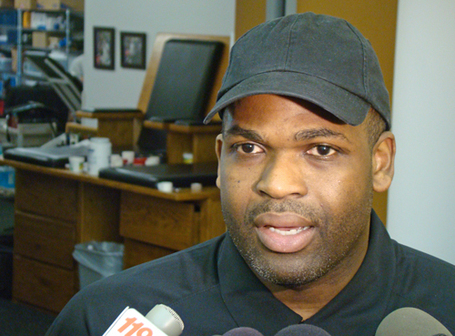 General characterization of the exit interviews

It went good. They all showed up. The last few years, normally you would have 1 or 2 guys not show up. All of our guys showed up. Good meetings and pretty positive and we talked about this season as well as things we need to do as an organization and our expectations next year.

How do you evaluate this season?

I thought it was a good year. Just reflecting back on all the things the guys had to go through this year and the adversity of so many injuries and playing through that. We accomplished one of our goals which was to certainly be the best we could be, to get back to the playoffs. We end our season again, similar to last year, where we exit, we're out after the first round, 6 games. But next year our goal is to improve that and play at least in May and June and not be going home in April.

Overriding theme or message for guys to carry into summer?

Just how difficult it is to accomplish all of these things we're talking about. Talking about winning your division, winning the Western Conference, one day eventually winning the championship. The one thing I talked to them about is that we're going home now and there is still a month and a half of basketball left. Mentally are you ready for that? Would we be ready for this next series after being down and having to win in our building and to go back to Phoenix to win a seventh game? Mentally where do you think you would be? Would you be happy with that? Would you be ready for San Antonio? Really trying to give them a picture of how difficult it is to accomplish all of these goals that we've set out.

What do you think you need to add?

Our shooting percentage was down this year. We lost shooters in Blake and Outlaw when we made that trade. And our percentages were down so that's something we will probably look at but we haven't talked about that.

Well, this offseason, again, is very important for him to get himself here and work and continue to work with our trainers and just do everything possible to get himself as strong as possible and ready to go next season. I look at our roster and I look at the team we could have next year, in a sense of Joel and Greg will be returning. We know that we know have Camby signed. I like that team. I like that group of bigs with LaMarcus and Jeff and Dante. For Joel and Greg, get with Jay and you guys get your butts working and be as strong as possible next year.

Does this team have championship potential?

I like our group. I like our team. We have yet to see this team healthy for a year. I like our chances of giving ourselves a chance.

Our guys, their personalities are not to go out and just get into you. You can condition guys to do that. [Juwan] Howard brought that to the team this year. In playoffs, you certainly need those guys that can play that style. And mentally it doesn't take them out. A lot of times you have that player your team feeds off of that. I thought at times we kind of fed off of Howard's physical fouls and being able to play through it.

Do you want to bring Juwan Howard back next year?

I like Howard. I really felt like he was a big part of saving the season for us when we lost Joel and Greg and he stepped in to that center position. He played more than we probably expected him to play but I thought he did a great job of filling in at that center position.

Do you think KP will be back?

[Laughs] Hey, we're moving on. Our focus right now is to take some time off and get ourselves ready for the draft.

Hard for you to imagine KP not being here?

We haven't talked about that. Kevin is focused on, first thing he told us is, 'Everybody take some time off.' He gave us a schedule as far as when we will meet to start break down our film on the draft. And what's coming up with the summer league. Our conversation is business as usual. All of that will be taken care of, as far as contracts and all of that, when the time comes.

Your Achilles injury, how did that affect you and will it change how you participate in practices?

No question. You won't see me on the floor playing any more. I promise you that. I shouldn't promise that. But, no, my plan is not to be out running with the guys. It really helped me grow and sit back and be able to look at the team and have to coach them in a different way because I couldn't get up and move. I was missing for four games and was at home watching the games on television. I felt what Brandon [Roy] was feeling, where you want to be there, you want to be in battle, you feel guilty about not being there, not being a part. It allowed me to look at myself and the team and coach the team in a different way. Normally I'm up involved. I kind of took a step back and allowed these guys to be more accountable for what they were doing out there.

You were more of a distinguished coach like Phil Jackson?

No, not quite. Not quite. I ain't on the level of Phil.

How do you envision the center position working out next season with Joel Przybilla, Marcus Camby and Greg Oden?

We'll see once we get into camp. The fact that we have that type of depth is good. And one thing about the depth, they will be able to compete for those minutes and I think with that many bigs or guys at the position, having a number of guys at the same position, if you have a tweak or a guy has some soreness, as opposed to allowing guys to play through it, you can rest a guy. Having 3 legitimate centers like that, I think that's a good thing. Camby will be 36 going on 37. Joel and Greg are coming off of major surgeries so they are going to need each other next season.

Has LaMarcus Aldridge cemented himself as a number two guy?

No, I'm happy with my staff.

Worried about assistant coaches being pursued by other teams?

Well, no. If our coaches are pursued by other teams I won't hold guys back. I think that's great. They all want opportunities. Over the last year or so there have been some teams that have shown some interest. I expect that to happen this year too. As long as we continue to win games and do well this organization has turned around, this coaching staff has been there, people on the outside are going to be looking at you, and they are going to want a part of that. It's going to make the coaches look even more attractive. You expect that, that people or teams will be coming after your coaches. I don't know if Luke will be back.