Share All sharing options for: Greg Oden's Summer of Uncertainty

A few weeks back, just before the toilet hit the fan for Tom Penn and Kevin Pritchard, CNNSI's Frank Hughes raised a great topic: What in the world are the Portland Trail Blazers going to do with Greg Oden this summer?  It's a complicated question and one that only gets more complicated if Pritchard doesn't make it through the summer. (For the purposes of this column, we'll assume that he does.)

Contract-wise, Oden will find himself in the same position as Brandon Roy and LaMarcus Aldridge last summer.  He will be set to enter the 4th year of his rookie contract which will pay him roughly $6.8 million dollars. His agent and the Blazers will be able to negotiate a long-term extension, similar to the ones given to Roy and Aldridge, that would kick in after next season. If the two sides are not able to come to an agreement, Oden would become a restricted free agent at the end of the 2010-2011 season.

With Roy, the organization's face and franchise player, getting to restricted free agency was never a serious possibility. When push came to shove the Blazers had to pay him.  And they did.

With Aldridge, whose negotiations dragged out longer and whose future is bright but not franchise-worthy, some observers believed restricted free agency was a preferable route.  "Make Aldridge earn his pay day," the thinking went.  While his game hasn't developed to the degree that everyone might have hoped, Aldridge's stability and production (he's averaged at least 17 and 7 over 75 games for the third consecutive season) have only increased his market rate. The added value in having Aldridge locked in, happy, comfortable and at a solid value makes the decision to extend him last fall the correct one.

In both of those negotiations, players, management and owner could reasonably agree on most, if not all, of the critical questions.  How important is this player to the franchise on the court? How reliable is he off the court and in the community? How do his statistics through three seasons stack up against others around the league? Has his manner of play demonstrated potential for future earnings that exceed his raw statistical output to date?

Agreeing in principle on these issues makes for a significantly easier negotiation process.  In Oden's case, virtually all of these questions lack definitive answers. That could make for -- to co-opt a phrase -- uncalm waters.

Coming to the Table

Let's do a little Mr. Rogers make-believe and step into the shoes of player, management and owner to see how they might value Oden as the sides approach the negotiating table this summer.

If I'm Oden's agent, my argument goes something like this...

At 22, Greg is the most dominating young big man prospect in the NBA, college or Europe.  No matter how his coach has used him -- starting or off the bench -- Greg has impacted games on both ends of the floor. He has demonstrated a champion's work ethic, devoting hundreds of hours to improving his game and hundreds more to improving his body.  He demonstrated significant year over year improvement in the areas -- rebounding and defense -- that the coaching staff had laid out for him.  In a number of key metrics for big men -- field goal percentage, rebound rate, blocks -- he has been at or near the top of the league's leaderboards.

As a consummate teammate and incredibly popular member of the Portland community, Greg's skills and personality perfectly complement Brandon Roy's, perhaps even better than Aldridge's do. The team has set a precedent by signing Roy and Aldridge to long-term deals and has mentioned Greg alongside those players in its marketing campaigns and in public statements about the team's future. Greg desires a 5 year guaranteed contract similar in size to Aldridge's. We would be willing to meet in the middle by sacrificing some of the base price for big time incentives for playing time, team wins, all star appearances and the like.

Greg has all the potential in the world and he's done everything he's been asked to by this organization.  Greg was drafted to be the big man of our future and the backbone of a title team. Greg could still play 10+ years in the league so our long term plans for him haven't changed.  With that said, his play, while promising and sensational at times, simply doesn't stack up to Aldridge's or Roy's because he hasn't been healthy often enough to truly impact a season with his presence. His various injuries are unrelated (a positive) but keep occurring (a negative we have to take into account when putting a price on his salary).

Nevertheless, we could scour the entire globe and not find another basketball player with his specific skillset and raw abilities.  Our other options at center -- even if we retain Marcus Camby -- are past their prime and, to make matters worse, Joel Przybilla is out indefinitely with an injury.  Even if Oden is as injury-prone as his harshest critics suggest, our only alternative at this point (barring a trade) is Jeff Pendergraph. That goes for now and into the future (after Camby retires). My goal is a medium-length deal at a solid price -- with increased flexibility in the form of a team option on the deal's final year -- a deal that gives Greg security and happiness, adds a significant measure of stability to the roster and keeps the so-called championship building blocks in place.

If I'm Paul Allen, I'm tempted to think along these lines...

Greg has been paid roughly $15 million dollars over three seasons and has appeared in less than 1/3 of the games his team has played. Greg was arguably the 10th best value on the roster this season: Marcus Camby, Brandon Roy, LaMarcus Aldridge, Martell Webster, Andre Miller, Juwan Howard, Jerryd Bayless, Rudy Fernandez and Nicolas Batum all produced more consistently, and in many cases much more affordably.  I'm set to pay Greg another $6.8 million for next season which is already more than he has earned based on his on-court play to date. What possible reason exists for rushing to lock this guy up long term now?

For years now, Basketball Prospectus's Kevin Pelton has been plugging away at his Schoene projections, a system that compares each NBA player's age and statistics with similar players from around the league and from the past to predictively model their future performance.  In a February column, KP2 unveiled some of these projections for this summer's major free agents. Specifically, he looked ahead to the next three seasons and used his system to calculate "Wins Above Replacement Player" (WARP).
WARP is a simple measure of how much better a player is compared to an average replacement at his position when it comes to producing wins over an 82 game season. Not surprisingly, LeBron James topped Pelton's list with a WARP of 14.3 for 2011, 17.2 for 2012 and 15.9 for 2013.  In other words,  Pelton projects James to produce 47.4 more total wins over the next 3 seasons than an average replacement player.  Dwyane Wade (37.4) and Chris Bosh (33.4) are the next two names on his list.

A month or so ago, KP2 sent me his SCHOENE projections for the Blazers.  The results might intrigue you... 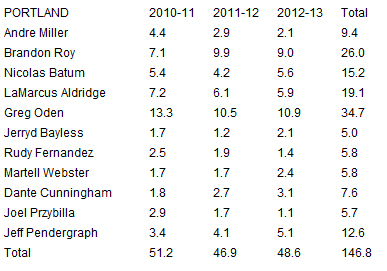 This chart shows each player accompanied by his WARP over the next three seasons and a total on the far right column. You'll see the usual suspects -- Roy, Aldridge and Batum -- faring very well. But you'll also notice that SCHOENE projects Oden to be the single most valuable contributor --relative to the average player at his position -- when it comes to producing wins over the next 3 years.  And it's really not that close.

KP2 provides this note of explanation...

SCHOENE compares Oden to superstar centers. His projection is essentially the same as Chris Bosh's. The caveat is there is no indicator for durability or injury in the SCHOENE system, meaning these players have uniformly been on the court more frequently than Oden. Also, his gaudy stats this year were compiled in a relatively small sample of games and are not toally reliable.

I present these numbers not because I think Oden will be the single most valuable Blazer over the next three years.  Instead because they perfectly encapsulate the tension inherent in these negotiations outlined above, the divide that exists when you attempt to quantify potential.

Oden's per-minute contributions are superstar-ish; his agent knows Oden's skillset and the stats it produces carry a mammoth price tag regardless of injuries. A stats-savvy management team realizes what a special talent Oden is and would surely prefer to have that 34.7 WARP over the next three years in Portland rather than somewhere else. But, as KP2 readily admits, WARP cannot account for injuries; Indeed, in this case, only Paul Allen can.

If I'm Greg Oden I want 5 years and $45-50 million fully guaranteed at the very least.  If I'm Kevin Pritchard, I wouldn't be able to justify an offer greater than 4 years for $36-40 million dollars with a team option on the fourth year. Significantly more money than Martell Webster, more money than Joel Przybilla, less money than LaMarcus Aldridge, solid flexibility to hedge against injury as much as possible.  You might be able to find a happy middle ground between those two sides this summer.  But would Paul Allen even consider the compromise that resulted?

If the organization's family first culture is giving way to a corporate, results-oriented, year-end evaluation climate, that doesn't bode well for Oden or the imaginary offer I've just presented.  One can reasonably picture Allen responding,  "$38 million? Riiiiiiiiiight.  If Greg makes it through next season and helps lead us deep in the playoffs, I'm happy to pay him that and maybe more. I'll even throw in a top of the line Windows Mobile camera phone. But he needs to earn it.  And if next year doesn't go as planned, I'll be able to sign him much more cheaply if I want to or be free of any long-term obligation if I don't want to.  Who cares if he is happy from now until then? He'll get over it."

In this case, a hard line might not be the worst approach for ownership.  Ironically, the organization is set up fairly well to take such an approach, thanks to how thoroughly it has supported Oden over the last three years, a very difficult chapter of his life.

The coaching staff and management have both repeatedly expressed their appreciation for him as a player and as a person. They've given him space when his mood asked for it. They've provided one-on-one training over the summer. They've stood by him during the injuries as forcefully as any person could possible hope from his employers.  They've tried to shield him from overbearing expectations while still letting him know they expect huge things from him because they have significant faith in his abilities.

PS (Update 8:40AM) Coup over at Rip City Project reminds me this morning he raised the issue of Oden's price back in February.  At the time, he reached a different conclusion: Oden's injuries offer the potential for a discount and the Blazers "absolutely must, and will" sign Oden to a long-term extension this fall.