Although Nate McMillan said today that the decision to start Brandon Roy would not be made until tomorrow, Roy said McMillan has informed him that he will start Game 6. In a potentially season-ending game, that call is about as easy as it gets.

Roy went through practice today while Nicolas Batum (shoulder) and Marcus Camby (ankle) enjoyed some extra rest.  McMillan expects both to play Game 6. "I was actually happy to get some practice in," Roy said. "Continue to find my rhythm and play with these guys. I thought the two days [off] was good even though we wanted to play sooner because we got beat so bad, the two days was good for our bodies."

"He looked fine, no problems, no pain... he went through practice with no problems," McMillan said.  "He's not experiencing any pain. The other night I took him out of the game because they were up by 24 or 25 points. I didn't want to risk injury in that fourth quarter. I saw him slip and fall, it was like, 'let's get him out.'"

While Roy plans to big minutes he sounded indecisive when asked whether he was capable of scoring at or near his season average.  "I've been thinking about that ever since I've been back. I don't know," Roy admitted. "I'm going to go out there and try to leave it all out there tomorrow. No limits on minutes, [I'm] starting, so I'm just going to play as hard as I can."

The questions in Portland were about Roy's offense today while the questions in Phoenix yesterday were about Roy's defense.  As Seth Pollack noted on Bright Side of the Sun, Suns coach Alvin Gentry is pinpointing Roy's lack of lateral mobility as an area ripe for exploitation.  Coming off the bench, it was a little bit easier to hide Roy on defense.  If he starts, Phoenix can run either Jason Richardson or Grant Hill off their favorite curl plays over and over and over, testing Roy's fitness and the stability of his knee without leaving the general framework of their offense.

Today was the first time I'd been able to see Roy's right knee after the surgery without a protective sleeve covering it.  Roy slid the sleeve down off of his knee during post-practice shooting work.  Here's a picture (sorry it's not a better angle). 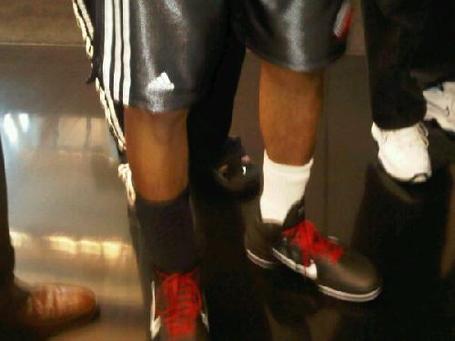 The lack of any visible swelling is pretty incredible given how recently he had the surgery and how much pounding the knee takes during two games and the hard practice today.  It's like he has developed immunity to post-surgical after-effects or something.

Otherwise, the possible last practice of the year was as hard-fought and cliche-filled as you might expect.  "It was very aggressive. Very aggressive," Batum said.  "We lose a game, we go home."

It goes without saying at this point that McMillan is happiest when he is digging foxholes. "We know tomorrow night is an elimination game for us. Eventually it was going to come to this. It just happens to be the sixth game for us. We've got to live to see another day," McMillan said.

It was Roy who found the most creative way to optimistically spin the team's current predicament.  "We've got a chance to go out here and tie up this series tomorrow and then both teams are facing elimination.  We are hopefully just facing elimination one game before them."