That was the overwhelming sensation for many tonight as the Phoenix Suns systematically demolished the Portland Trail Blazers 108-89 in the Rose Garden.  The night started with smoke -- machines pumped white clouds to enhance the atmosphere during player introductions -- but it ended with fire, thanks to a career night from guard Jason Richardson, who pumped in 42 points and helped Phoenix regain homecourt advantage and take a 2-1 series lead.

To call this game an emotional rollercoaster wouldn't quite be accurate.  It was more like skydiving with a busted parachute.  Freefall for the first 35,000 feet until a miraculous soft landing at the top of a 200 foot tree.  And then two wide open fourth quarter Jason Richardson three pointers snapped the tree's branches, causing the Blazers, and their fans' hopes, to plummet violently to the ground.

Indeed the post-game interviews had a distinct post-mortem vibe.  Jason, how did it feel to kill them?  Nate, how did they kill you? Alvin, how much did you enjoy watching Jason kill them?  Who knows.  Maybe I watch too many episodes of The First 48.

Whether Jason Richardson -- in going 13 of 19 from the field and 8 of 12 from deep for a playoff career high 42 points -- dealt the death blow to the Blazers' 2009-2010 season remains to be seen.  But in the way the Blazers absolutely folded under pressure, in the boos that came down as the deficit hit 25 points in the second quarter and in the voice of Nate McMillan afterwards, a man who sounded like he trying to convince himself that his team was only down and not out, it's hard to imagine a scenario where this doesn't end badly, and abruptly, for Portland.

"The second half, we won that," Nate McMillan said afterwards, in a mesmerizing display of straw grasping. "We started to play basketball, we started to fight. We won both of those quarters. Somehow we got to get that fight, that scrappiness at the start of the game."  The relentless motivator, the unbending optimist had nothing besides a solid but not nearly enough late 3rd and early 4th quarter push to build off of.  It was 34 to 16 after one; 66 to 37 at the half; a 31 point Phoenix lead at one point; a wire to wire loss. Phoenix's effortless scoring and intense defense steamrolled his threadbare roster.  His top two answers -- LaMarcus Aldridge and Andre Miller -- continued to be questions, rendered impotent by early foul trouble and smart defensive schemes, respectively.

But this was Richardson's night.  On Tuesday I presented the following picture, which does a great job of simply showing how the Blazers have handled Phoenix's pick and rolls. 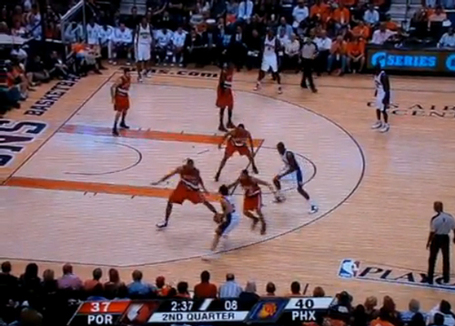 Accompanying the photo, I wrote...

Steve Nash and Amar'e Stoudemire attempt to run a pick and roll but the Blazers "load up" by sending three defenders to the general area... Nash makes the smart, simple read: pass the ball around the perimeter to the weakside and attempt to take advantage of the (eventual) open man in the corner.  The Blazers are telling the Suns here: We really don't want you to run the pick and roll cleanly so we will risk playing 3 on 2 with your shooters.

There are three possible reasons you would expose yourself to that risk on the weakside: 1) You really respect Stoudemire in the pick and roll 2) You really respect Nash in the pick and roll and 3) You don't totally respect at least one of Phoenix's shooters.  In this case, it was a combination of all 3.  Their plan was to let Hill (or whoever is in the corner) have the shot on the weakside until that produces enough points to force the Blazers to respect him.  On Sunday, Hill, Jason Richardson, Goran Dragic and Jared Dudley combined for 9-33 shooting.  That's not going to get it done.  Why wouldn't you load up against Nash and Stoudemire if those are the results?

Jason Richardson's play answered that rhetorical question with a rhetorical question of its own: When are you guys going to start guarding me? The answer from the Blazers: not tonight.  Time and again the Suns found themselves in this situation; time and again they effortlessly rotated the ball to the corner, making the smart and simple read, feeding a ready-to-fire Richardson; time and again he delivered.  It's the play the Blazers defense is drawn up to allow.  It's the play the Suns offense proved, emphatically, that they can run.

Gentry singled out Channing Frye for praise, as the sharp-shooting center lined up at the angle and drew the attention from Portland's rotating defenders that freed Richardson.  "If we swing it to Channing they either rotate to him or they gotta play halfway [between him and the corner]. Channing did a good job of swinging the ball immediately to J. Rich and J. Rich hit the open shots."

Did he ever.  I joked during the game that the Synergy Sports breakdown of Richardson's night would need to specify whether his shots were "open jumpers," "wide open jumpers" or "wide wide open jumpers" because there were so many and they came in such rapid succession. "I think it's my best game as a pro," Richardson said, with ice packs on his knees and a smile on his face. "9 years in the league, only been in the playoffs twice, spent 7 summers at home."

Summer.  It's a curse word for NBA players this time of year. Tonight was a big step in that direction for the Blazers. 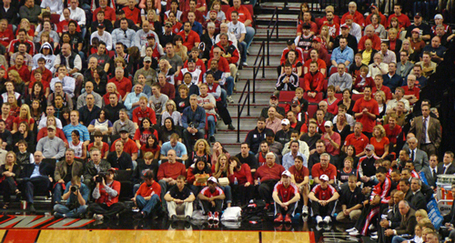 The first quarters have really decided the game. It seems like both quarters were the same. LA, LaMarcus is in foul trouble. We have to go to our bench, they get off to a fast start. We give up 30 point quarters. The first half is basically just like the last game. Emotionally right now we are not controlling our emotions. Being able to play at this level without being calm out there. It's going to be a physical game. They're going to be aggressive. I felt like, especially tonight, we talk about our 3 C's: being calm and being clear about what we want to do and being consistent. That hasn't happened in these last two games.

Well, it's put a lot of pressure on other guys to have to do some things when L.A. has been in foul trouble early in the first quarter and they've got size on Hill, so we've had to, we've been in holes the first half with foul trouble and basically them loading up and trying to take out LaMarcus and Miller and we've struggled to get other guys going. We can't get in foul trouble, one, and two, our other guys have got to make plays. When they get their opportunities, we're going to have to knock down some shots because what they're doing is double teaming LaMarcus pretty much on catch and Miller, they're sending a crowd to him, his pick and rolls and his post ups.

This wasn't what you were looking for?

Tonight we just seemed tight. I thought the first half we just seemed to be a little tight, maybe put some pressure on ourselves and look like the first the game. The second half we won that. We started to play basketball, we started to fight. We won both of those quarters. Somehow we got to get that fight, that scrappiness at the start of the game.

Nicolas: His status and what was it like missing him?

I haven't checked with Jay. We just knew that he wasn't going to be coming back tonight. Of course you're down another guy and we're without already without a guy. Still we played the second half without Nic. We played the way we've got to play this game. With fight, you gotta battle. You gotta get up into these guys and guard them. We won the second half. That was something that we needed to take into the game on Saturday. That we did win the second half. We've beaten this team before. We can do it. But we can't start the way we have the last two games.

You make a run; Richardson hits a three

That's the calmness I'm talking about. I thought the first half we didn't show any calmness and the second half we fought our way back into the game, we get into 11 with about 5 or 6 minutes to go, and we fouled 3 straight trips. Put them on the free throw line. Again it was an emotional foul as opposed to position defense we just hit a guy and bailed him out. That's where you gotta be able to calm down in situations like that and understand time/score situations. You're down 11, you made a run, 6 minutes to go, a lot of time, get a stop, make them earn it, but don't put them on the free throw line. They're a great free throw shooting team.

Rudy hits 3s at end.  Is that the aggressiveness you're talking about?

I thought all of our guys, once we got down, we relaxed then. We just started to play. He was moving and running around and getting himself open and shooting the ball, which is what he's gotta do out there. He's very capable, we set some screens for him, a lot of that was just Rudy moving and letting it fly. Being aggressive, looking to be aggressive. Again it just looked like we started to relax when we were down big as opposed to the start of the game, we looked really tight out there.