For everyone emailing with questions, health updates on players go up first (and without delay) on Twitter.

This morning's MRI confirmed that Nicolas Batum does have a right shoulder strain.  Batum did not practice today but was at the Practice Facility.   His shoulder had some tape or wrapping on the back but wasn't grotesquely bruised or in a sling or anything.  His attitude during interactions with the media seemed neither overly upbeat or pessimistic.  More than anything he seemed even more serious than usual and focused on the series.

The team officially lists Batum as "questionable" and as a "game time decision" for tomorrow.  Asked whether he thought he would be able to play, Batum said, "Me, I think so. I will see tomorrow."  He said his shoulder feels "better but it still feels sore a little bit on the back of my shoulder... I need to take care, get some treatment tonight and tomorrow."

Over the past two years Batum has displayed both a high pain tolerance and a competitive desire that rivals Brandon Roy's.  "I have to play without B. Roy," Batum said today. "I don't want to miss a game, I want to be playing, I don't want to sit on the side."

I would be surprised if Batum didn't at least give it a go tomorrow night.  Whether the injury limits his impact (especially his shot) is a different question.

Nate tried his best today to focus on the team's win on Sunday night and building off the successes therein rather than focusing on last night's failures. In fact, his comments were eerily similar to Dave's post earlier.  McMillan said there would not be any lineup changes (pending Batum's health), meaning Rudy Fernandez would continue to start at the 2 spot.

Nate said he was looking to see more aggressive play from both Andre Miller and Rudy Fernandez.  Asked if he thought Fernandez was playing with confidence, Nate responded with a flat "no" and moved on immediately to the next question.  Later he deflected criticism of Rudy's play by saying "We didn't play well as a team." He continued, "As a unit we gave in to them, getting up and denying, getting up and pressuring... allowed them to basically disrupt our rhythm and execution."

McMillan also said that the team needed to do a better job of getting both Rudy and LaMarcus Aldridge open.  Aldridge complained a little bit about the extra attention he was dealing with but didn't have any major adjustments in mind, other than being ready for the pressure and continuing to shoot.

The enigma wrapped in a quagmire that has everyone confused is Rudy Fernandez.  His tentative, timid play is particularly galling after he spent the last few months squawking about his role and playing time.  Following 2-7 and 0-2 shooting performances in Phoenix, this video of Rudy's post-practice shooting work, shot by Andrew Tonry of Portland Roundball Society, surely has the potential to polarize.  Rudy Lovers: "Hey, that's just Rudy being Rudy, keeping a light attitude in the face of adversity." Rudy Haters: "Dude, scoot in about 30 feet, use both hands and keep at it for the next six hours..."

Brandon Roy was back at the Practice Facility today and in a good mood.  He lifted weights with strength coach Bobby Medina and took questions for an extended period of time.  Roy is wearing this spiderman-esque wrap over his right leg. 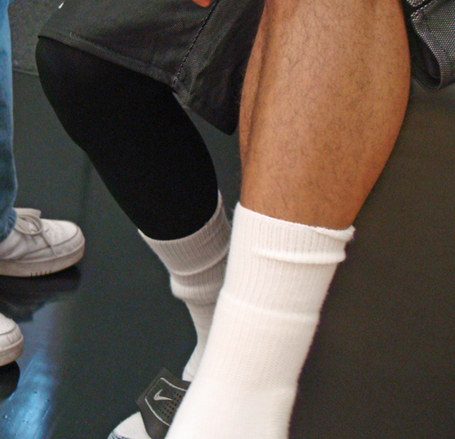 Roy said his status is being evaluated by medical staffers on a daily basis.  As for today?  "I was able to do a little bit of shooting, a little bit on the treadmill, they're going to take it slow. [The medical staff] don't want me going too crazy until they take the stitches out. It feels good."

Roy said his mentality is to push hard through the recovery phase but he also seemed fairly realistic.  "If I come [back] swollen tomorrow then they'll scale me back," he noted. Compared to his previous knee rehabilitations, Roy said, "I'm very far ahead of schedule right now."

As for his potential availability against Phoenix, Roy said, "If it gets to 6 or 7 games I would definitely love to try to play but I don't want to get anyone's expectations up because I still have a little bit ways away. I want to make sure I'm feeling right enough to go out there and be productive."

That's pretty much the exact answer you want to here from a player in his post-operative position.  Aggressive but careful.  Roy also said he feels that he would definitely be able to play if the Blazers advanced to the second round.

KP was back in the building doling out back slaps like nobody's business. Speaking of which, I think I need an MRI on my shoulder.  Must be the Post-Camby Extension Afterglow.  Dwight Jaynes wrote that KP was actively involved in the Camby negotations.  That's the best sign for him in a long time.

As for Camby he was nursing an ankle injury but is expected to play tomorrow. 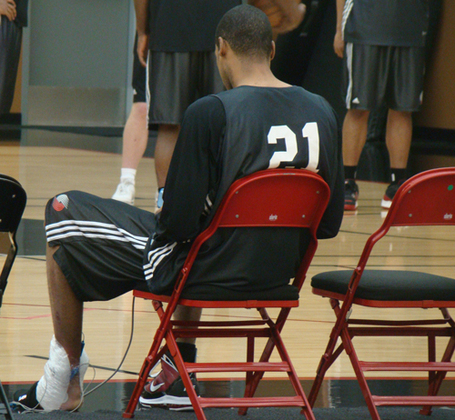 The mood today was not as down as you might expect after a tough loss. There's certainly a confidence factor that comes with being back in Portland and a swagger that goes with holding the home court advantage.

But questions about Batum linger.  There is no doubt that his teammates want him playing big minutes, especially given how well he's shot the ball so far this series.