The Portland Trail Blazers lost to the Golden State Warriors 122-116 despite the fact that I was able to take this picture in the game's final minutes. 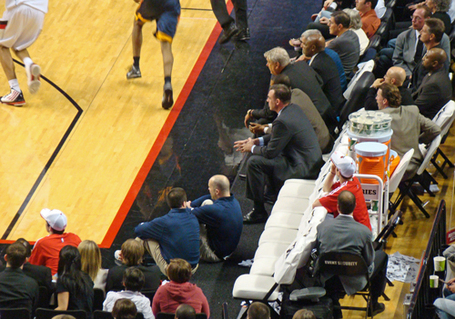 In case you missed the game's bizarre closing sequence, read Dave's recap to find out how the short-handed Warriors managed to chop off both of their arms at the elbow.  At issue was Nelson's desire to re-enter Devean George into the game after he fouled out because Nelson believed both Anthony Morrow and Ronny Turiaf, who had dressed for the game to meet the league minimum for dressed players, and Chris Hunter, who injured himself during the game, were unfit to play from a health perspective.

The referees insisted that Nelson check Hunter, Turiaf and Morrow into the game before they could officially declare them too injured to play.  This incensed Nelson, who stalled and screamed for an extended period of time before finally relenting and playing along, instructing his players to head straight for the locker room after he pulled them.

After the game, Nelson let loose. "It was predetermined in warm-ups that two of my players couldn't play. To force those guys on the court is a legal issue I think. That's not right. I've got another player injured in the game, he was not going to return, that was clear and I told the referees he couldn't return. I said 'I only have five left.' The rule reads if you only have five players and a player fouls [out], it's a technical foul and the two free throws. And I understood that. That was't a problem for me. That wasn't what I was arguing.

"They made me put an injured player back in the game. That's not right. I begged them, read the rules, call the league, do something. That's not the rule. You can't be forced to put an injured player in the game. They told me to just work with them and get through this and they told me what I had to do. Put a guy in for a few seconds and then say he was injured. He was injured before. I said, 'He was already injured. What do I have to do that for? Why don't I just tell you he's injured. That's what I'm doing.' Anyway I did it their way. It wasn't the right way. There's already rules for that. I know the rules because I've been playing injured all year."

Nelly's theatrics aside, this game was meaningless.  It reminded me a lot of the Blazers Christmas charity game against the St. Mary's Home for Boys team in that Jeff Pendergraph led the way with some rim-rocking dunks (a career-high 23 points... will he ever top that?) and Patty Mills was bombing away from deep without a care in the world.

Afterwards, Martell Webster summed up the general mood as the team prepares to face the Phoenix Suns in the first round of the playoffs: "It's good to be the underdog."  That will be the mantra for the foreseeable future.

Ever seen something like that end game with Coach Nelson?

Oh, yeah, well old school coaches, man, they... when you win as many games as Coach Nelson has won you can do pretty much what you want out on the floor.

How do you like the match up with Phoenix?

We've got a good chanc e. We've got a chance. THey're a very good team, we know that. We've had success against them but they have probably were one of the hottest teams if not the hottest team the last part of the season. We certainly know what they are capable of doing, the style of basketball that they want to play. It's going to be a battle of the tempos. They want to run and gun and attack and Nash is arguably one of the MVP candidates this year. LeBron James has done some great things and you certainly have to look at him but after that you can look at Nash's season and say he's had a great year. Amar'e is playing great basketball so it's a very talented team that we do feel we have a chance.

Will you take a breather or get right to the playoff preparation?

As soon as we hear when we're playing then we'll make our adjustments from that. If we play Saturday we're going to go to work tomorrow and leave tomorrow night. If we play Sunday then we'll take a day and come back and go Friday and Saturday.

Did you prefer Phoenix over the other teams?

Well it really didn't make a difference. Once we found out we were the sixth seed, it didn't make a difference because all of these teams are going to be tough. And we have to be ready for all of them. Whether it was Utah, Phoenix, Dallas or Denver in the playoffs, the Lakers, we were in that 8th spot, we were going to need to be ready. We're going to play good basketball. Our focus now is to get our guys back and try to get them as healthy as possible. And we have a shot. I feel that we play our style of basketball and we're playing good on both ends of the floor, we have a chance to win.

Will you prepare as if you won't have Brandon healthy?

No. We'll look at Brandon possibly Friday moving around if he can and we'll go from there.

Did you have a message for the team at the end of the regular season?

They've had a very good regular season. For us, it was about seeing how we could advance, as far as what seed we could get. For this team to finish sixth in the west with everything they've gone through, they've had a good year. We've had to overcome a lot of things, I think a lot of people are writing us off already and I think a lot of that is due to the fact that Brandon, people don't know whether Brandon is going to play, so they are not giving us a chance. We've been faced with that all season long. So here we go again.

Once I found out that we had that spot, we were going to sit our guys and not risk anyone or those main guys in the rotation getting injured.

Did Dante get hurt?

He would have subbed for Batum if he had been healthy?

Yeah, I'm looking around. He got sick during the half and never came back. He didn't come back out until late in the fourth. I was trying to just rotate in and get through the game with these guys not playing as many minutes but we didn't have a sub.

Did you exhale not having to face Utah?

All these teams were going to be tough. Phoenix is playing great basketball. They go in and they kicked Utah. That's the team we are facing and we have to be ready for that.