Is It Still Bayless Time?

Share All sharing options for: Is It Still Bayless Time?

Back on December 10 -- 23 games into the season-- I crunched the numbers and argued that increasing Jerryd Bayless's playing time was more than warranted. In limited minutes as the Blazers' third string point guard, Bayless had shot the lights out, drew fouls at an absurd rate, limited his turnovers, played solid defense on the league's back-up guards and promised a scoring spark that a flat-at-the-time Blazers team badly needed. Steve Blake was struggling with his shot, Andre Miller wasn't yet clicking on all cylinders with his new teammates and the Blazers were just coming to grips with the loss of Greg Oden.

It's been less than three months but so much has happened. Blake got pneumonia and then was traded, Andre Miller has come around, Brandon Roy joined Greg Oden on the shelf for a month. As the team inches closer to full health and this season's final stretch approaches there's a new confidence in the air. Where does all of that leave Jerryd Bayless?

A Look at Bayless's Playing Time

To find out where Bayless stands, let's look back at what he has accomplished this season. To begin, let's take a quick look at how his minutes have fluctuated. Click here for a full size version. 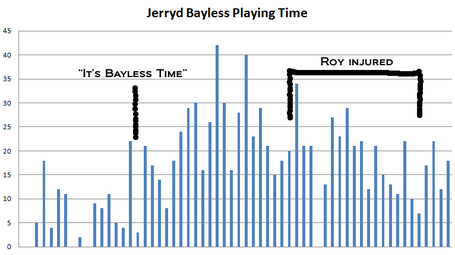 Moving left to right on the X axis moves us through the season from start to current. The Y axis is simply Bayless's raw minutes played per game.

If I was a self-absorbed columnist or drive-time radio host, I might take credit for Bayless's sharp increase in playing time immediately after I posted "It's Bayless Time." I'm not. So instead you can see that Nate McMillan adjusted to the losses of Greg Oden and Joel Przybilla, the continued absence of Travis Outlaw and Nicolas Batum and the sickness of Steve Blake by expanding Bayless's role off the bench. Bayless responded with a few monster December nights: 29 trash-talking points in a nationally-televised win over Phoenix on 12/17 and a season-high 31 in a huge road win over San Antonio on 12/23. But there were some forgettable nights too: a cringe-inducing 3-13 in a 12/19 loss at Orlando and an unproductive o-fer in a 12/28 home loss to Philadelphia.

In late January and early February, Bayless briefly moved into a starting two guard role due to the extended absence of Brandon Roy. Around that time, he enjoyed his most consistent scoring streak of the season: 8 straight games in double-figures. Unfortunately, that production didn't translate to Wins as the Blazers went just 3-5.

While a large bump in minutes in January and February might have been expected, it didn't really materialize. Despite starting for a stretch, Bayless hasn't topped 30 minutes played since January 18th. He hit his monthly high-water mark in January -- at a shade under 24 minutes per game -- but that barely topped his December numbers. February saw the trade of Steve Blake -- which theoretically opened up an extended playing time window for Bayless -- but the returns of Nicolas Batum and Brandon Roy wound up cutting sharply into his run and point production. That's a lot of moving pieces around him.

If you glance quickly at his monthly splits above, you might notice that his shooting percentage seems mostly steady while his minutes and points show related peaks and valleys. You'll also notice that his three point shooting since the turn of the new year has been abysmal. To fully address Bayless's production given his varied playing time, it's helpful to return to advanced, per-possession statistics to gauge his impact.

Let's look back at some of the advanced metrics I used to argue the case for increasing his playing time. I have listed the numbers I used back in December side-by-side with the numbers he has put up over the last 20 games.

I've also included Andre Miler's numbers for an easy side-by-side comparison as I did back in December. 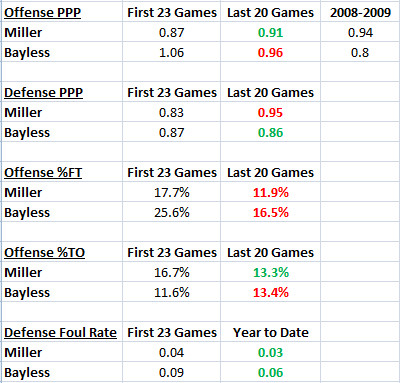 I find these updated numbers quite revealing. Remember: these are splits rather than cumulative stats so we're comparing how these players have played over the last 20 games to how they played during the first 23 games rather than looking at an updated, running total.

First Miller. As expected, his offensive efficiency (PPP) and turnover rate (%TO) show late-season improvement as he had some time to adjust to his new team and is fully entrenched as the starting point guard. Those first string point duties have caused his defensive efficiency to take a step back. This isn't a huge surprise: playing one on one defense against the league's starting point guards is an infinitely more difficult task than checking back-up point guards. His shift to starting point guard has also led to a late-season drop in %FT, a by-product of increased facilitating and distributing on the first unit (6.8 assists per game in February compared to 4.8 assists per game in November) rather than attacking the hoop as the primary offensive option on the second unit. Nothing super surprising or worrisome here.

Now Bayless. The good news: He's committing less fouls recently and his overall defensive efficiency has improved slightly, despite the fact that he's been guarding better players. The bad news: There are two big-time drops, Offensive PPP and %FT. It's not uncommon for a player's PPP to drop when his minutes are increased or his role is expanded. In Bayless's case, his PPP was dropping from an all-world 1.06 that was put up in limited second-string minutes at the beginning of the season. Much less important than the fact that his PPP almost inevitably fell is where he ended up. .96 is a solid number over a 20 game stretch that included a number of starts. All things considered, Bayless is still generating points efficiently.

That said, Bayless's drop in %FT goes a long way to explaining his drop in efficiency. In limited time off the bench to start the season, defenses struggled to adjust to his quickness and ability to get to the rim. Nobody was game-planning for Bayless and, to his credit, he was able to continue to take advantage of his surprise attack element as his minutes increased. Bayless's free throw attempts nicely mirror his overall numbers. In December, Bayless went to the line 4.7 times per game. In January, 4.2 times. In February, as his playing time has decreased, his free attempts have also fallen to 3.3.

What %FT tells us is that Bayless's free throw attempts has steadily dropped whether his playing time has increased or decreased. In the first 23 games of the season, Bayless drew a foul during 1 of every 4 of his possessions. Through the first half of the season, Bayless drew a foul on roughly 1 in 5 possessions. Over the last 20 games, though, that number has fallen to roughly 1 in 6. So if Bayless isn't drawing fouls as often as before, what is he doing?

Here, I've extended our comparison to include the entire first half of the season versus the last 20 games. Click here for a full size version.

It's interesting to note that Bayless's situational usage hasn't varied much at all even though his role and minutes have changed. Bayless is finding his number called on the pick and roll an almost identical amount of the time. His spot up shooting and usage in isolation remain relatively steady. His transition usage has picked up slightly and his performance in that situation has been extremely efficient. Bayless is viewed as a good finisher around the rim so it's no surprise his efficiency in transition is quite high. Lots of run out layups, dunks and fouls drawn.

But if a single number jumps off this chart, it's Bayless's 28.1% shooting on spot up jumpers, a catastrophic fall from the strong 45.1% he put up through the first half of the season. His related fall in spot up PPP -- from 1.15 to .74 -- is both humongous and atrocious, especially considering that the presence of the three point line generally inflates spot-up shooting PPP.

On yesterday's Wingcast, KP2 noted that Brandon Roy ignored a wide-open Bayless on a late-game possession in Memphis, opting instead to drive into 3 defenders and take a contested shot. After encouraging Roy to seek out LaMarcus Aldridge in late-game pick and rolls more often, I jokingly urged Roy to continue to ignore Bayless. Unfortunately 28.1% and .74PPP on spot up jumpers -- which are regularly wide open looks given the nature of the Blazers' drive-and-kick, floor-spacing offense -- is no laughing matter.

I noted above that Bayless's field goal percentage hasn't varied much from month to month even though his 3 point shooting has taken a nosedive in 2010. This situational breakdown elaborates on these observations nicely: An increased efficiency is transition and improved shooting/scoring off of pick and rolls has masked a big time drop from the outside. In total, Bayless is indeed making roughly the same percentage of shots as he has throughout the year. He's just making more in some categories (at or near the rim) and way less in others (outside) as the season has progressed.

Where does this leave Nate McMillan when it comes to determining Jerryd Bayless's role going forward?

McMillan can now safely view Bayless as a known quantity in a number areas. He has put up respectable one-on-one defensive numbers and proven that he is capable of not committing large quantities of dumb fouls. He has continued to prove that he has the ability to finish well at the rim and to get to the rim regularly against both first and second team defenders. He has proven that he's still a solid weapon when it comes to drawing fouls and, overall, that he can generate points at a good but not great efficiency clip. In short, Bayless's year over year progress on both offense and defense, even though it has tapered off some as the year wore on, continues to be undeniable.

Unfortunately for Bayless, a fierce competitor who surely wants to play when it really matters, all of that progress is easily sabotaged by his shaky jump shot. And if he cannot improve his outside shooting quickly -- and dramatically -- it is next to impossible to play him meaningful second-half playoff minutes.

Indeed, a trustworthy jumper is Bayless's best argument for second-half minutes. Miller offers more experience, better decision-making, much better passing in every offensive situation, the ability to post up his defender and similar defensive efficiency. If Bayless isn't knocking down his shot -- and he definitely isn't right now -- what is the argument for McMillan to play him with the game on the line, the court spread and the ball in Roy's hands? There isn't one.

PS Many thanks, as always, to the Invisible Ninja for his research assistance. If you're not fiddling with his insane motion chart, you're missing out.