After issuing a terse press release before the game -- one that covered the bare necessity basics and arrived 48 hours too late to be truly meaningful-- Blazers Owner Paul Allen sat courtside last night, flanked by a lady friend and Vulcan Flunky #1A Bert Kolde. Kolde is pictured below celebrating the dramatic fourth quarter Blazers run by firing someone for absolutely no reason via text message. Neither Kevin Pritchard (no surprise) nor Larry Miller (in timeout?) accompanied Allen.

But what had some fans buzzing last night wasn't either of Allen's companions or the missing executives. It was, quite simply, Allen's Thundersticks. 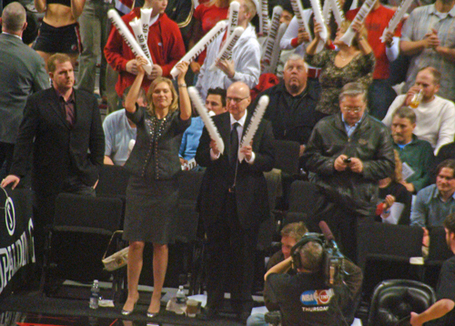 That's right, the ornery billionaire who thinks nothing of letting Golden Boys dangle until they beg for their jobs was... gasp... slamming together two (free) inflatable batons to show his support for the franchise he owns and loves. Shoulder level. Then down by his knees. Mostly in rhythm. But, whammo, there was the occasional (Jimi-inspired?) improvisational twist. Allen was all in. Man of the people!

But wait. There is his security staff roping him off from the other fans. And, oh yeah, there's his crony oblivious to the action, wasting the best seat in the house. And, yes, there is the perfectly placed TNT camera capturing this outburst in all its glory for a national television audience. Publicity stunt!?!

I need your help settling this. Was this genuine thundersticking or manufactured thundersticking? The simplest expression of fandom or the cleverest of PR tactics? Please vote and then help me out in the comments.