The following are updates from the press conference held by the Blazers this afternoon.  All quotes are courtesy of Blazersedge's Ben Golliver, covering the press conference live.  The speakers were Kevin Pritchard, General Manager, and Larry Miller, Team President.  Thanks to Seth Pollack from SBN and Bright Side of the Sun for posting these quotes and impressions as Ben delivered them.

[Editorial from Ben:] If I had to bank on a single phrase being repeated ad nauseam by Pritchard and Miller this afternoon it would be "The focus should be on the players"

[Observation from Ben:] 20+ media members are in attendance at Practice Facility for this presser. There was like 3 or 4 for Nate's postgame on Friday.

For those asking, Jay Allen of 95.5FM says no live audio from this "informal" presser but will have clips on air ASAP. 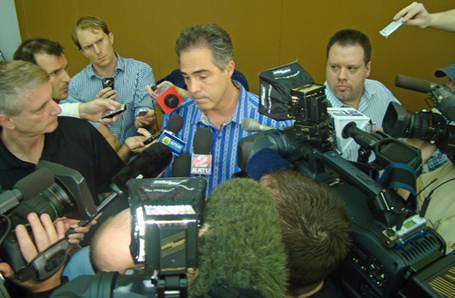 I want to be here, I love it here"

"I want to focus on the team...Do you think I want this focus? You're crazy"

On reaction to Penn firing "I was sad"

"I want to be here...Warren (LeGarie) has his own opinions."

"There's been some articles that say we're not connected [as an organization]... That is not correct."

"Losing Tom is not an easy thing"

Kevin Pritchard responds to the question, "Will you be fired?" saying,  "I don't know that" 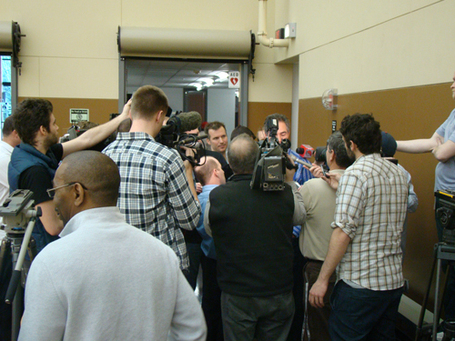 After about 15 minutes, Kevin Pritchard is finished speaking.  Final money quote:  "Shame on us if we agree all the time." 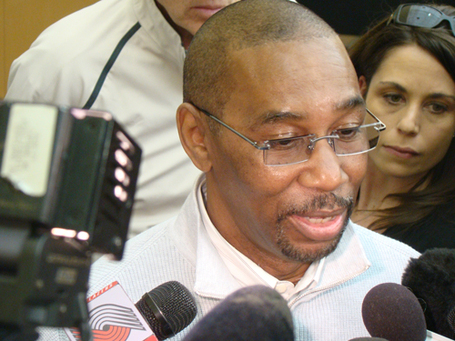 "[Kevin Pritchard] has done a great job of getting the franchise where it is" but evaluation will come "at the end of the season". This evaluation will not just be of KP but all major decisions.

"There's never a good time" for the Penn firing.

"I'm as surprised as you guys are that all this stuff came out of [the Penn firing]."

"Lets put this behind us. Kevin wants to be here, he's made that clear."

On whether he's worried about this being a distraction: "Yeah, I am actually"

On the original story about Tom Penn morphing into a discussion of Kevin Pricthard: "WE didn't make it about Kevin."

On claims that there was a personal issue between Larry Miller and Tom Penn: "Absolutely positively untrue."

Larry Miller concludes, having spoken for about 15 minutes.  Final money quote on speculation from Peter Vecsey that Miller would be Portland's future GM:  "I hope not."

Ben left us with a couple of clear impressions:

1.  Miller essentially refused to directly give KP a vote of confidence and pushed everything until after the season.

2.  Pritchard did not look confident at all that he would return.

Ben is preparing a full version of the story which will be up presently.  We'll have more reaction throughout the evening.