There is no joy in Mudville. Nor is there a witty hook.

Here is the latest on Kevin Pritchard and Tom Penn. In chronological order...

A lot has now been made public.  Significant information remains unavailable. A lot surely will never come out.
But the most troubling bit in all of this, to me, has been Kevin Pritchard's silence over the past week.
Time and again over the last three years Pritchard has been out front when bad news breaks, spinning so forcefully and so effortlessly that both media and fans were able, almost, to predict his cheery statements before he said them.  Worse than anything mentioned in Abbott's piece or Wojnarowski's piece is the fact that Pritchard has uttered virtually nothing in response to Penn's firing and that he actively avoided taking the opportunity to address the rumors concerning his own future last week.
Instead, he's left the talking to Larry Miller, who has stumbled through it with vagaries and double-talking cliches.  And, of course, his agent Warren LeGarie -- who apparently needs his Adderall dosage scaled back -- has escalated things gracelessly. Pritchard, master of owning the story, has abandoned the bookstore.
By remaining silent, an organization that Pritchard has defended so many times has taken hit after hit after hit without a response.  To me, that's not a good sign.  Thankfully, Pritchard's silence will come to an end this afternoon as both he and Miller are scheduled to address the media.
Drama aside, here's what you might have missed basketball-wise this weekend...
Wizards Recap | Wizards Media Row Report | Suns Recap
Click through for various reactions to the developing story on Pritchard, a few pieces about actual basketball, a valiant play charting effort and all the Power Rankings and Playoff Projections you can handle.
-- Ben Golliver | benjamin.golliver@gmail.com | Twitter

It's fairly clear LeGarie is still using unsavory means to help his clients: just last summer, LeGarie badmouthed Kings coaching candidate Paul Westphal to local and national reporters. Why? LeGarie's client Kurt Rambis, considered a favorite for the job, wasn't happy with the salary offered by the Kings. As Westphal and Rambis were the two finalists for the job, LeGarie thought he could knock Westphal out of the race, giving the Kings no choice but to pay Rambis more than the $3 million over two seasons offered.

It didn't work -- the Kings hired Westphal when Rambis wouldn't agree to the salary structure. Rambis told the press he rejected a Kings offer because the team was too deep in rebuilding mode, a made-up excuse proven false when Rambis later took the Wolves job, which came with even more rebuilding but more money.

Is Penn's sacking LeGarie's fault? Maybe it is, maybe it isn't. But it wouldn't be outside the realm of possibility for LeGarie to have overplayed his hand.

Ed Snider of the LA Times reacts to the Pritchard situation...

Owner Paul Allen, the Microsoft co-founder - and/or the coldblooded "Vulcans" from his Seattle-based Vulcan Inc. - are second-guessing the selection of oft-injured Greg Oden over burgeoning superstar Kevin Durant in the 2007 draft.

For all of his charitable endeavors, Allen is a callous businessman who bankrupted the Rose Garden arena he built, trying to dump it on the lenders that bankrolled him.

The brash Pritchard is hardly the league's most popular GM, but his good-guy players wiped out the memory of the "Jail Blazers," whom the Vulcans allowed to pillage for so long because they appeared to be close to winning a title.

Pritchard departing Rip City would be devastating to the fanbase and send shockwaves throughout the league. Pritchard would be unemployed for approximately .04 seconds (just enough time for a Derek Fisher turnaround), and the Blazers new era of league domination would become Atlantis. Beautiful, iconic, and sunk beneath the sea.

Dwight Jaynes, who had urged patience in waiting to hear from people other than Warren LeGarie and put some distance between Penn and Pritchard, reacts to Adrian Wojnarowski's column with a serious tone...

Folks, this is some ugly, nasty stuff and really somebody, be it Larry Miller, Kevin Pritchard or Paul Allen, needs to get out front and either clear the air or offer up a resignation... This is bad, folks. Maybe the end of the guy's career in Portland.

Given Wojnarowski's historically unkind disposition toward Pritchard, it's tempting to write all this off as a collection of quotes from sources who either want Pritchard's job or simply don't like the way he has done his business. But we cannot do that. If Pritchard really has been complaining to anyone who will listen about his lack of a payday - though Woj could be exaggerating about how often this happened, given how hard the adjectives and verbs he used about KP are - then that just isn't a good business practice, not when you are trying to secure a long-term relationship with a team.

The Invisible Ninja with a chart to visualize the entire mess... 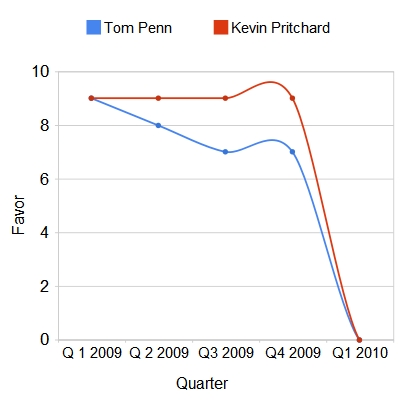 A great piece posted marred by regrettable timing. Brandon Roy goes 18 for 59 over the last 3 games but, according to Brian T. Smith, Roy is "smoother than ever"...

Blazers lead assistant coach Dean Demopoulos said everything Roy does in the lane comes down to "timing" and "feel."

"He uses his body. He's got eyes all over it," Demopoulos said. "Like, for a pivot player, we used to say you have to have eyes in your (butt.) He's got eyes all over his body. If he feels you, he knows where you are. And all of a sudden, adjustments are made. And he's great around the basket with both hands. And his slow to fast is as big as a discrepancy as anything."

Coup from Rip City Project tries his hand at thoroughly charting plays from Friday's win over Washington only to conclude...

So what did we learn from this exercise? Not a whole lot, really. The Blazers ran as many pick-and-rolls as you might expect, while also giving Brandon Roy a predictable number of isolation possessions with their offense in the tank. They don't post anyone consistently up other than LaMarcus Aldridge, who did get the ball on the blocks in the fourth quarter.

What was most surprising is how pick-and-roll heavy the offense became when Jerryd Bayless was running things. There wasn't nearly as much movement as when Miller was controlling the show, and the forwards seemed to know that they are supposed to set a screen for Bayless whenever possible.

Wendell Maxey urges the Blazers to go inside...

The road to success in this league is paved by guards getting to the rim and bigs banging down low, forcing the refs to make a call (hence Portland's 29 trips to the freethrow line) when all else fails.

That's what Portland did for three quarters. Miller and Roy had their way in the paint. And where they fell short, guys like Marcus Camby, Juwan Howard and LaMarcus Aldridge picked up the scraps. But a shoddy shooting fourth was the killer here, including six missed three-pointers and only two points in the paint.

They settled into their old ways.

Sheed on BustaBucket.com reacts to the loss in Phoenix...

This game to me was an indicator of things to come. Playing a playoff team on the road and getting tested in more than one aspect of the game means a lot. Like I said before, I can't say enough for how Miller and Camby are contributing to the team right now. What this game came down to for me was finishing. Portland started off fine, sustained good play through 3 quarters, but then fell flat in the fourth. If we want to win a playoff series, everyone needs to play 48 minutes. Most of the time we're relying on Brandon in the 4th, but with teams locking him up down the stretch, LA, Andre, Batum and everyone else will need to step up.

John Canzano with some unsolicited advice for the Blazers...

And to the players in black and red, here's a tip: Don't fade away -- your fans, and this region need you more than ever right now.

It feels strange to celebrate the franchise's history amidst some of the ugliest talk in years.  But here are Jason Quick's choices for the 11th through 15th best Blazers of all time. Excellent, concise profiles as always.