How Good is Kevin Durant?

Share All sharing options for: How Good is Kevin Durant?

I spent a good chunk of yesterday morning listening to Nate McMillan and the Blazer players praising Kevin Durant's offensive abilities.  This morning I decided to dig through some data to get a better sense for how superlative KD has been so far this year.

I came up with the following chart. (Sorry for so many charts recently. It's a phase. I'll get over it.) 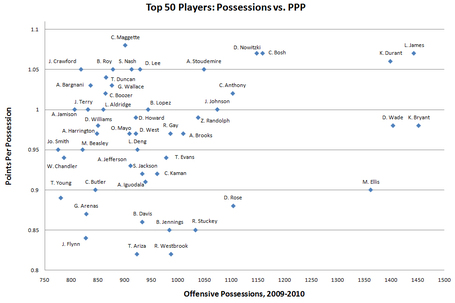 A ton of things jump out from this chart, including just how much more frequently the top 5 players (Bryant, James, Wade, Durant, Ellis) use possessions when compared to the rest of the league.

The league's truly elite scorers from an efficiency standpoint find themselves at or above 1.05 PPP.  That's exactly where Brandon Roy is right now. To be able to maintain that kind of efficiency while increasing the number of possessions is the difficult part.  A great example is Kobe Bryant.  All the possessions in the world yet his efficiency can't keep pace.  This is a nice visual representation of the effect of the occasional 7 for 31 frustration games.

The two outliers way up in the right hand corner should probably be considered the top two scoring weapons in the entire league.  They have maintained elite level efficiency while using tons of possessions. Those two players? LeBron James, not surprisingly.  And just barely trailing him?  That's right.  Kevin Durant.

PS Thanks to InvisiNinjaPDX for his research assistance.