As expected for awhile now, Nate McMillan is publicly entertaining the notion of a starting lineup shuffle.

I asked McMillan whether the change of heart regarding his current lineup was caused by the team's recent stretch of up-and-down play or by the news that Brandon Roy is out indefinitely.

As discussed previously, it seemed like McMillan has been in a holding pattern for the last week or two as he waited for Roy's return. Now that Roy's return isn't pinned down to a specific date, he no longer has the luxury of waiting.  Indeed, McMillan said any thoughts regarding Roy's return and its impact upon his lineups and rotations will be postponed until after the break.

For us, we know he won't be back before the break so I'm not looking at that until we get back. We'll start to think about how we're going to approach it once we get back.

With that said, he gave off a pretty clear vibe that something needed to change and soon.  The most obvious move, one discussed this morning on the radio and for the last week or so, is replacing Jerryd Bayless with Nicolas Batum and shifting Martell Webster down to the off guard slot.

Given the size and skills of "Oklahoma City's" perimeter starting trio -- Russell Westbrook, Thabo Sefalosha and Kevin Durant -- Andre Miller, Martell Webster and Nicolas Batum seem to match up as well as any other trio McMillan could throw out there.  Batum told reporters today that he and McMillan had discussed possibly starting him against the Lakers but the change wasn't made once Kobe Bryant was announced as a scratch.

The big task tomorrow will be defending Kevin Durant whose game log is absolutely ridiculous. 25+ points in every single game since December 19.  In those 24 games, the "Thunder" are 16-8.  The last time these two teams faced off, you might recall, Martell Webster did a superb job of making Durant work in limiting him to 16 points on 20 shots.

Martell was guarding him and doing a good job of just bodying him. Making him catch out. He missed some shots in that game but we did a nice job of just trying to keep him in front. Limit his catches. A guy like that, the more you can take away his opportunity to play with the ball, the better. You've got to crowd him. Not give him open shots because he doesn't really have weaknesses. He can shoot the 3 ball, get to the basket, I think the strength of his game right now is getting to the free throw line.

McMillan also said he would alternate Webster and Batum on Durant because "OKC" has been running so much of its offense through him.

We knew he would be a good player and he's living up to that. Each year he is getting better and more confident on the floor.  He has become an all star this year. Knew he had a lot of talent, knew he would be good in this league and that potential that we thought he had, he's starting to show it.

Of course Martell and Nic and those guys will get the opportunity on him. You're going to need that [alternating] as far as [how well] he's playing. He's getting a lot of touches. They're playing through him a lot and he's playing well.

Andre Miller has caught a lot of flak this season. 52 point game aside, he probably hasn't gotten as much credit as he deserves for keeping the Blazers ship at least somewhat afloat during Brandon Roy's lengthy absence.   No question, Miller has stepped up his play significantly since his argument with Nate McMillan; He's carried the scoring load at times and has facilitated the offensive development of guys like LaMarcus Aldridge, Martell Webster and Jerryd Bayless.  He still struggles at times with consistency but his contributions, especially since the new year, have been irreplaceable.

With that said, I thought it might be a good time to take a look back at some of the big names that hit the trade and free agent markets last summer.  Miller has often been called the Blazers' third option after the failed attempts to land Hedo Turkoglu and Paul Millsap.  At the time of Miller's signing, Kevin Pritchard was careful to note the reasonable size and length of Miller's contract and the value it provided.  Earlier this year, as the Miller/McMillan Express may or may not have been coming off the tracks between, Miller's contract seemed like it would be difficult to move.  An abundance of productive point guards on their rookie deals and questions about Miller's age and attitude made it seem unlikely that a team would pay a premium for his proven abilities.

The age question and Miller's fit with this team once its fully healthy are still open.  But the value question for this season has been settled in my opinion.

Take a look at the following chart.   Click for the full size version. 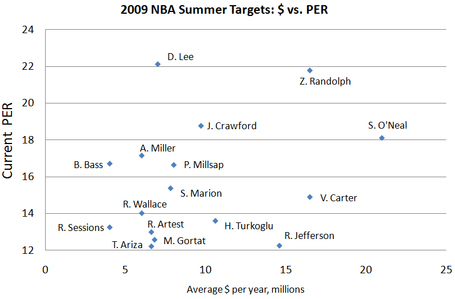 This chart compares some of last summer's major trade and free agent targets around the league. The X axis shows the average per-year salary each player was given (either in a new contract or an existing contract absorbed in trade) and the Y axis shows that player's PER ranking for this season as of today.

Obviously PER isn't a perfect player ranking system.  But viewed in this context, the return on Andre Miller's signing looks pretty good, doesn't it?  Perhaps better than most of those deals? And don't overlook the fact that there is just one guaranteed year left on his deal after this season is up.