Brandon Roy Will Miss the All Star Game

Share All sharing options for: Brandon Roy Will Miss the All Star Game 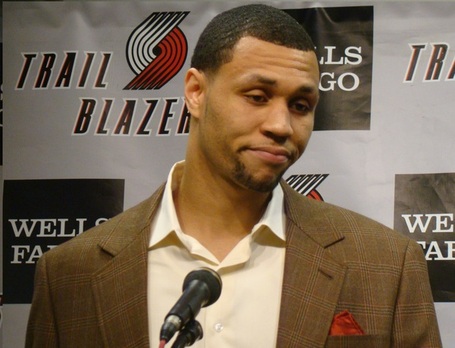 Brandon Roy addressed the media before the Lakers game tonight regarding the decision to hold him out through All Star weekend.  Roy was clearly disappointed and said, "I haven't been this down in a long time... I gotta cheer myself up." He said that he and the team have decided not to set a specific date for his return and will instead allow his body to heal before making any decisions on when he will return.

Of note, Roy also said that he "doesn't know for sure" whether he will go to Los Angeles on Monday to receive a second round of PRP treatment.  The option is still being discussed but the decision has not yet been made.  Roy did say that he would not travel to Dallas for All Star weekend and instead would remain in Portland for rest and recovery.

The Portland Trail Blazers have announced to the media via text message that guard Brandon Roy will be held out of the next three games (tonight versus Los Angeles, Tuesday versus "Oklahoma City" and Wednesday at San Antonio) and will therefore miss the 2010 NBA All Star Game in Dallas, Texas, due to his strained right hamstring.

Roy's hamstring has been bothering him for weeks and forced him to miss back-to-back games in mid-January.  Roy then attempted to play against the Philadelphia 76ers on January 20 but he re-aggravated the injury and left the game limping before halftime.  He has since missed nine consecutive games and received Platelet Rich Plasma treatment in Seattle to help speed his recovery.

At practice yesterday, Roy stated that he was frustrated with his lack of progress.

The Blazers' first game after the All Star break is on February 16, when they host the Los Angeles Clippers.  That would be nearly a month after the re-aggravation in Philadelphia.

"Unfortunately, I'm not where I was hoping I would be physically at this point," said Roy. "It's a setback and I'm obviously disappointed, but my entire focus is getting back on the court, contributing and helping our team down the stretch."

Roy initially injured his hamstring January 13 vs. Milwaukee and re-aggravated it January 20 at Philadelphia. He has missed 11 of Portland's last 12 games heading into tonight's game with the L.A. Lakers.

"This was not a decision that any of us wanted to make, but in the end we had to do what was best for Brandon," said Pritchard. "We're hopeful that this extended rest will put Brandon in the best possible position to return to the line-up shortly after the All-Star break."

Roy will address the media tonight.