There was a ton going on this week. Let's knock down some topics one by one.

Comcast Sports Northwest wasn't thrilled with yesterday's interview.  To hear their side, follow this link to The Oregon Politico's video of testimony from Comcast's David Manougian.  The part they would like you to focus on...

Same old, same old.  Comcast continues to steadfastly refuse to provide information regarding the financial specifics of their negotiations with DirecTV. John Canzano argues nicely that they should reconsider this policy.

Offers to a legislator and to Comcast to provide their thoughts on Wednesday's hearing here on Blazersedge have been made.  Stay tuned. <-- Horrible pun.

There was a great piece in Sports Illustrated by Kelli Anderson about the insane basketball talent pipeline that has developed in the Seattle-area over the last decade or so.  The article focuses on some of the most recent Seattle-area products and their relationships with the previous generation of guys like Jamal Crawford.  The story reminded me of this post from October 2008 when Brandon Roy unexpectedly popped into the Lewis and Clark College gym to say what's up to a Washington AAU team filled with prospects like Abdul Gaddy and Tony Wroten.

Anyway, both Roy and Martell Webster are mentioned in the SI piece.  There's a great vignette about Webster and his AAU coach Jim Marsh, who was actually a former Portland Trail Blazer.

Marsh, who played for USC in the '60s and then, briefly, for the nascent Portland Trail Blazers, worked as an assistant coach at Utah for seven years before being hired as a Sonics TV commentator in 1981. An executive for Costco, Marsh runs a company program called Washington State Mentors, and he volunteers as the coach of Friends of Hoop. What does he get out of it? "The relationships I have with players blow me away," he says.

In 2004, when he had what was probably his best team-it included future NBA draft picks Hawes, Martell Webster and Jon Brockman as well as future McDonald's All-American Micah Downs and Stanford-bound Mitch Johnson, as well as Isaiah Thomas-Marsh learned he had Parkinson's disease. Once he told the team, he says, "Martell wouldn't let me pick up a bag again."

As Marsh tells this story, his eyes fill. "Maybe it's the medication I take," he says, "but sometimes I get a bit snivelly."

I wrote on Friday that the Blazers were targeting guys that shook loose during or shortly after the trade deadline for their 15th spot and this morning Jason Quick has confirmed that one of those names is Kenny Thomas, who was cut loose by the Sacramento Kings to make roster space for incoming players in the Martin-for-Landry mini-blockbuster.

Asked this morning to describe Thomas's Kings tenure in one word, SacTown Royalty's Tom Ziller chose "Interminable."  Indeed, Thomas possessed a difficult-to-move contract that saw him spent the last 5 years with the Kings, the last 3 of which he barely saw any playing time (57 combined games played since the 2007-2008 season). Here's Ziller's scouting report of Thomas for your dissection...

He's actually a solid defender. Quick. Quick hands. Pretty long. He can guard fours and small fives. Good defensive rebounder. His go-to defensive move: sticks a forearm right between the shoulder blades of a posting opponent.  So he won't be much help against Dick Bavetta and the Lakers because he will foul out in 2 min, 45 seconds.

The Greatest Google Motion Chart of all Time

The Invisible Ninja has been hard at work all week producing his Google Motion Mona Lisa.  Check it out.  The spreadsheet tracks big-name players going back to 2004 and allows you to compare the players on 30+ factors, including the basics like shooting percentage but also advanced stats like Win Shares, Offensive Rating, etc.  You can compare players on four different measures at a time by adjusting the X and Y axes and the bubble's size and color.  It's overwhelmingly insane.  Blow your whole Friday afternoon on that thing.

I spent a good chunk of time looking back at Shake this week. On the suggestion of Kevin Pelton, I did some research on the Gini Coefficient, which KP2 says was suggested years ago on one of his super-dork forums to measure consistency.  The Gini Coefficient is used to measure household income inequality across various societies.  Like Shake, Gini runs along a 0 to 1 scale, with one being totally inconsistent and 0 being totally consistent.  You might like to read up on it.  Pretty interesting stuff.

I ran both Shake and Gini for the top 25 scorers in the league and Brandon Roy (through Monday night's games). 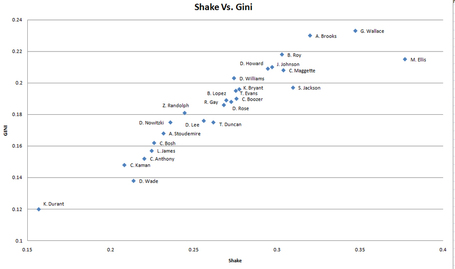 Click here for a full-size chart comparing the two. As you can see, they produce very similar relative results for the top-end scorers. With that data, I made the following two charts.

First, a comparison of scoring and consistency for the top 25 scorers.   Points per game is on the X axis; Shake is on the Y axis.  A nice visualization to see how the alpha dogs of the league compare.  Helpful to notice an outlier like Monta Ellis and to appreciate guys like Chris Bosh and Dirk Nowitzki, who might get overlooked in the grand scheme of things.

Second, a comparison of scoring efficiency and consistency.  Points Per Possession, my favorite measure of offensive efficiency, is on the X axis; Shake is on the Y axis.  I really like this one because it starts to pull out who the real scoring robots are in the NBA. The guys who deliver points play after play and do it similarly game after game.  A ton of interesting things to note in this chart including the nearly identical location of Chris Bosh and LeBron James, the surprising locations of David Lee and Amar'e Stoudemire and Brandon Roy's location within the league's elite.  His Shake has obviously taken a hit due to playing through the hamstring injury.  We should expect it to improve as the rest of the season plays out.

We decided to create a composite measure of scoring effectiveness using those three factors:  PPP to judge efficiency, Hollinger's Usage and Shake to judge consistency.  I turned the heavy math lifting over to KP2 at this point.  After some thought, he decided efficiency deserved to be weighted (45%), usage (40%) and consistency (15%).  Because he likes to stick his finger in my eye, KP2 switched to Gini instead of Shake for consistency.  He then did some nifty math tricks so that the composite scores would fit on a traditional 1 to 100 scale.  Here's how the top points per game scorers in the league shake out using this new rating. 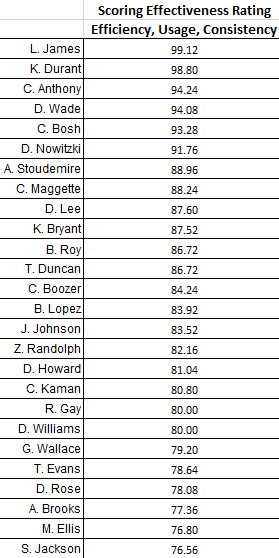 Note: an embarrassing typographical error in my original Shake post gave Kobe Bryant a much higher shake at the time than was warranted.  That has been corrected.

John Hollinger notes that the Blazers have had the most games missed by top 6 players (162) in the entire league.  The next closest team is Golden State with 108 and the league median right now is 31. Those are just crazy numbers.  He also points out that Oklahoma City has had just 2!

The only top-six player for OKC to miss a game thus far is center Nenad Krstic, who missed two games. With the help of such fortunate health, Oklahoma City has emerged as one of the West's top surprises and seems on pace to win about a dozen games more than anyone expected.

Might be a good idea to sell OKC stock when everyone predicts a deep playoff run next fall.

I missed linking Chad Ford's Insider take on the Marcus Camby trade earlier this week. he ranked the Blazers 4th for teams that are "going for it" this year (behind Cleveland, Dallas and Houston) and wrote...

Positive spin: The team was desperate for help up front, given the season-ending injuries to Greg Oden and Joel Przybilla. Marcus Camby is a great fit as a veteran shot-blocking, rebounding presence, and he has an expiring contract. Assuming Oden and Przybilla are healthy next fall, the Trail Blazers can walk away without having to continue to pay Camby, who meanwhile should secure the Blazers' position in the playoffs as a fourth or fifth seed.

Negative spin: The Blazers had to give up two key assets. Blake was the team's backup point guard, and it remains to be seen whether Jerryd Bayless can pick up the slack. Travis Outlaw has been injured this season, but he has a lot of upside and was a tough asset to lose.

I'm not as optimistic about Camby moving the Blazers up the Western Conference chart as Ford but his overall analysis is solid.  In terms of deadline winners, I would go Houston and Cleveland then a big gap then Dallas and Portland and then everyone else. A lot more trade deadline talk, including some excellent analysis from KP2, can be heard on this week's Wingcast.