It's been a long day.  In lieu of a full report tonight, please enjoy a final wrap on the Marcus Camby trade, a few random game notes and a transcript of Nate McMillan's post-game comments.

For a full recap of the Portland Trail Blazers 109-87 cruise control victory over the underCambied Los Angeles Clippers, check out Dave's excellent post.

The big news from tonight's game: Brandon Roy's disappointed and disappointing self-diagnosis.  For a full transcript of Roy's post-game comments, in which he wonders aloud whether he might miss the rest of the season, click here.

Before the game, Kevin Pritchard helped introduce Marcus Camby to the media.  Camby stood at Nate McMillan's podium, taking questions about the Blazers, his family and his defensive abilities. Camby was in an upbeat, easy-going mood. Another no-nonsense veteran professional cut in the mold of Andre Miller and Juwan Howard.  Here's a first look at Marcus Camby the Portland Trail Blazer. 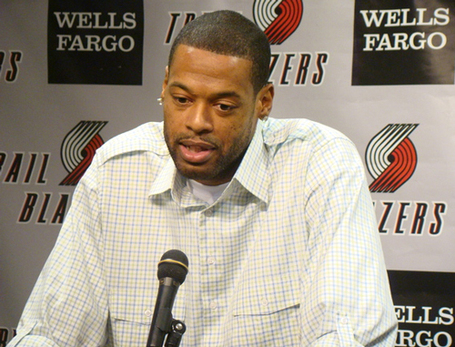 Here's a shot of Kevin Pritchard standing in front of the word "courage."  (This is my way of subtly reinforcing good, bold decisions. Let's build on this.)

By the end of the mini-presser, KP looked drained.  What a day it was for the media covering the team.  One can only imagine the ups and downs for KP and his inner circle.  Less than an hour before tip, Pritchard, Chad Buchanan and Mike Born gathered at midcourt and, with a few minutes to themselves, flashed some pretty wide smiles.  Can you blame them?

You likely heard the Rose Garden crowd's overwhelmingly positive reception for Camby through the television broadcast.  Camby received a huge ovation when he was shown on the Rose Garden big screen and many fans stood up to welcome him to Portland. No question about it: from courtside to the upper deck, the Rose Garden's bounce was back.  As the Blazers slammed the door in the fourth quarter, the building was rocking hard.

It's not often that it works out this way but all of the behind-the-scenes chatter regarding the Camby trade was as positive as the crowd reaction. By the end of the night, I had had probably 15-20 conversations with various people -- team employees, season ticket holders, Rose Garden employees, other media members, a random fan -- and not a single person faulted KP for trading Outlaw and Blake for Camby.  Only the Brandon Roy extension signing press conference had the same air of consensus approval. By comparison, a lot more questions and eyebrows were being raised when Andre Miller's signing was announced.

Certainly there were those who were extremely sad to see both Blake and Outlaw go.  "I saw Travis the first day he came to Portland.  It's like losing a son," one observer noted, before going on to admit that renting Camby for the stretch run seems like a smart play.  He wasn't alone in contemplating the outgoing Blazers. One sign in the Rose Garden read, "Steve and Travis: Trail Blazers For Life."

Others were excited, bordering on elated.  "I wasn't sure KP still had it in him," said a prominent observer, shaking his head happily as he broke down potential playoff match-ups.  "Marcus Camby? [Expletive] Yes!," concluded one fan during halftime.

Lastly a media member argued, "Nate wanted to start Blake and have Outlaw as the 6th man. KP brought in Miller, constantly gushes about Bayless and seems infatuated with both Batum and Cunningham. Should we conclude that if you can't make the correct decisions, others will make them for you?"  To be fair, McMillan did suggest earlier this season that he could use some help in the post and likely understood the implications of that request.

After a long day, did it feel good to get a win?

Yeah, I thought it was good. It was a good game coming off a break. Executing defensively as well as offensively. It's always nice to see these guys knock down shots. But coming off of a break like that you try to get your legs, get your timing. I thought our guys did a nice job.

Decision to play Brandon and his situation

I talked to him before the game. I thought he was just a little, he needed a little push as far as getting out there. He was more concerned about conditioning than about his leg. We talked about managing his minutes. He decided to go. Once he went he thought he felt it a little bit so we decided to pull him at the half and go with Rudy in the starting lineup.

We've got days to give him some time. And we'll do that.

Do you regret giving him that little nudge?

No, he didn't pull it, he just felt it. He felt it before.

Martell is starting to gain some consistency

The shooting has been great. And we need that. We are going to need him to continue to shoot the ball like that. Defensively, he's working to improve in that area. A lot of times he's drawing that assignment of the best offensive wing. That's an area where he's given the effort and working at that. He gets that, he is definitely going to help us. He's a good rebounder, his stroke has been there for most of the year. That's a big weapon on the floor. When you have guys double teaming LaMarcus with Brandon out.

Does the trade affect this team?

They can't control that. You can't control it. We've talked about that over the years. Things happen. As I told the team today, we talked about this opening night. That we were somewhat lucky to have a number of players, talented players that we had in that locker room to start the season off with. It's going to be very difficult with contracts and salaries to keep this type of group together. It's just really difficult to do that. We probably have one year to do it. I was hoping we could take advantage of that. Unfortunately we didn't have that opportunity because of injuries. Then it comes down to making business decisions, the organization. They had to make decisions based on where we were. It was a good move. We needed a center. We lost both of ours, to give ourselves a chance to stay in this race we needed a big. We got what we feel is a pretty good big.

They beat you on the boards, did it show how much you need Camby?

We won pretty much everything else except the boards. I thought at times they got to the basket fairly easily. Yeah, we do need [Camby]. What he brings to the floor we are missing. A guy that will rotate and defend the basket as well as rebound and block shots. We need that. We've been trying to get that from Greg and Joel and at times we did. But that's his strength. I'm looking forward to getting him out there.

This team was refreshed from the break?

We wanted to front him. I thought Dante did a nice job of just making him work. Denying him the ball. We wanted to double team him from the baseline and not from the top like we did last game. He picked us apart, if he caught it from the top, then we were going to just mix up our defense and make him score over the top.