Cleaning Out the Notebook

Share All sharing options for: Cleaning Out the Notebook

Last night I wrote that Nicolas Batum was pretty hard on himself for his defensive performance on Kevin Durant.

Down the stretch, it's fair to say Batum got torched a little bit.  But I went back through the game tape and spliced together all the plays that found Batum matched up on Durant one-on-one.  Here's the clip reel.

I'm not going to break this down in as much detail as I did Batum's earlier work against Dirk Nowitzki but there are a few interesting things to point out.

Kevin Pelton had a nice take on the match-up in his post last night.

Tonight was the first look this season at a matchup that figures to be an entertaining one in the Western Conference for years to come, Thunder star Kevin Durant and Blazers defensive specialist Nicolas Batum. Batum, who recently returned from shoulder surgery, missed the first meeting of these two teams. In that game, Martell Webster did an excellent job defending Durant, and though Batum made his first start of the season, Webster initially got the call against Durant defensively. With the Oklahoma City forward starting as well as Portland came out cold on the other end, Webster sat in favor of Steve Blake little more than three minutes into the game, passing Durant along to Batum.

Both players are incredible athletes whose arms seem to reach almost to the floor. That makes Batum an ideal defensive matchup for Durant, and he did a better job of man defense than Durant's final line of 33 points and 11 rebounds would indicate. Through the first three quarters, Durant shot just 9-of-21 from the field. And if that still sounds pretty good, remember that Durant has shot 50.6 percent from the field in calendar 2010 as part of a stretch that has seen him elevate his game to another level. Beyond that, Durant rarely beat Batum one-on-one early on, getting most of his points in transition or as part of pick-and-rolls. But Durant would eventually get the better of his opposing number, knocking down a long jumper and a pull-up three-pointer in Batum's face to salt the game away late in the fourth.

As for Batum, in the nine games he has played since returning to the lineup he has looked like a different player than during his solid rookie season. Then, Batum was very much a role player whose involvement in the Blazers' offense was limited to transition and spot-up three-pointers. Building on his strong effort for the French National Team in last summer's EuroBasket 2009, Batum has been much more aggressive in his abbreviated sophomore campaign, increasing his usage rate to 16.6 percent of Portland's possessions while on the floor and creating more for himself. That's a good sign that Batum, still just 21, has a chance to develop into a valuable player at both ends of the floor.

Points Per Possession Plus Assists

Thanks for all the feedback on yesterday's chart which looked at the 50 NBA players who use the most possessions and their offensive efficiency as measured by PPP.

PPP is by no means a perfect barometer.  The main reasons I prefer using PPP are 1) the highest scoring players via PPP closely align with those players who are generally considered to be the best players in the league by media, fellow players and coaches and 2) it's relatively simple.  Points Per Possession is an easy concept to wrap your head around and it's great for comparing the apples and oranges of guys who play in different paces and the effects of guys playing different positions.  I like to think of PPP as a barometer of an "offensive weapon" rather than a measure of the "best overall offensive player."  It's difficult if not impossible to get everyone to agree on a perfect offensive rating formula or measure.  If PPP falls short in any major way, it's undervaluing pass-first point guards.  Guys like Steve Nash and Deron Williams are efficient scorers in their own right but their efficiency only increases when you take into account how many buckets they help set up.

With that said, PPP is not the only barometer we have available.  There is another measure called "Points Per Possession Plus Assists" which aims to account for the offensive impact a player creates from both his scoring and his passing.

The Invisible Ninja (follow him on twitter here) and I spent a fair bit of time over the last 24 hours assembling and charting Points Per Possession Plus Assists ratings. Here's what we came up with.  Click here for the full size chart. 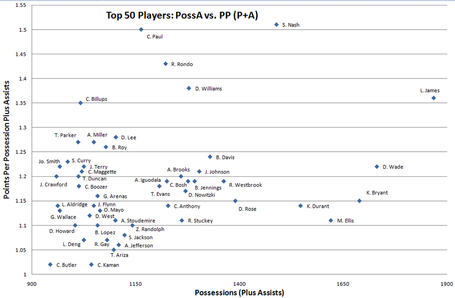 On the X axis you'll see what we are calling PossA.  This is simply a player's possessions (plays that end with that player shooting, being fouled in the act of shooting or turning the ball over) plus that player's raw assist total.  On the Y axis, you'll see Points Per Possession Plus Assists, also known as PP (P+A).  This number ranking is generated by Synergy Sports to balance a player's PPP as well as measure the effects of his assists for 2 point baskets, 3 point baskets, etc.

(To compile this chart, we started fresh, looking for the top 50 players who have generated the most PossA this season.  44 of them were in the top 50 for Poss in our previous chart, in case you're interested.)

There is a ton to take away from this chart but here are a few of the more obvious notes...

To me, both PPP and PP(P+A) are useful.  I tend to lean more heavily on PPP for its ease of use and the fact that both bigs and smalls find their way onto the top end of the list.  But PP (P+A) is also interesting.  Why not look at both if they're both available?

In what can only be described as gigantic high school basketball news, Tim Brown of Oregonlive.com is reporting that Terrence Ross will transfer back to Jefferson High School and is seeking eligibility for this season.  Great scoop and reporting by Brown, who has become the single best source of local hoops coverage in the state.  If ruled eligible, Ross will be paired with Terrence Jones, giving Jeff two of the nation's top 25 high school seniors.