Share All sharing options for: The Portland Trail Blazers And Losing Streaks

This chart is a quick look at the Western Conference playoff teams from the last five years. The teams are listed in seed order, accompanied by their regular season win totals and their longest losing streaks of the year. 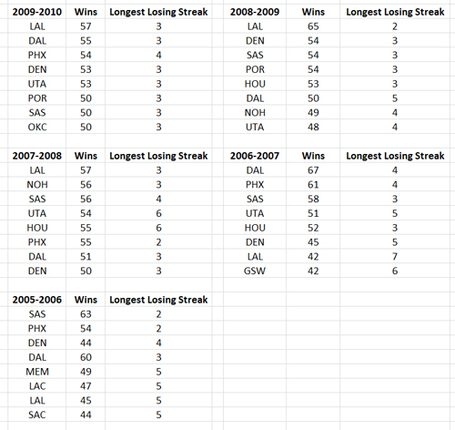 As you can see, there wasn't a single Western Conference team that suffered a six-game losing streak and still qualified for the playoffs in either of the last two seasons.

In total, that makes four times in the past four seasons that Western Conference teams have qualified for the playoffs after enduring a six-game slide.

As for Portland and the playoffs this season? On the bright side, teams have been where Portland is right now and survived to make the post-season before. So this isn't unchartered water and the playoffs aren't yet an impossible dream. But it doesn't happen very often, especially when the conference is deep with talented teams, as it presumably is again this season.

Despite their ongoing six-game slide, the Blazers are currently tied with the Warriors for 9th place in the Western Conference with a record of 8-11, two games behind the Phoenix Suns, who are the No. 8 seed. (As of this writing.)

All numbers courtesy of Basketball-Reference.com.