Share All sharing options for: Quantifying And Visualizing Disappointment

We spent a fair bit of time back during the fall discussing how much the statistical projection systems loved Greg Oden (here and here) and how high they were on the Portland Trail Blazers as a potential championship contender.

A recent email glowing with optimism after last week's three-game winning streak prompted me to investigate the Blazers and the expectations surrounding the team. Hovering around .500 for much of this season, this group has become the first true "glass is half full or half empty" Blazers team in the last few years.

There are always good and attributes to any team and player, but when a team straddles .500 those are more pronounced. One needs look no further than the last two games, a disappointing loss to a bottom-feeding Golden State Warriors and a spectacular win against the division-leading Utah Jazz. While LaMarcus Aldridge's development, Wesley Matthews's arrival and Andre Miller's continued steadiness have provided plenty of reasons to cheer, especially recently, I still feel a general deflation, prompted by the knee injuries and uncertain futures of Brandon Roy and Greg Oden.

But expectations can often be trickier than meets the eye, so I decided to conduct a relatively simple investigation to see how Portland's early season run matches up to the other 29 teams around the league. The results weren't particularly surprising, however seeing this in visual form (below) was pretty interesting.

Looking Back At Projected Expectations

Next, I extrapolated each team's current win/loss record out through the rest of the season. If a team is 12-12, then its extrapolation, obviously, is 41 wins.

Here's a look at the results in table format. 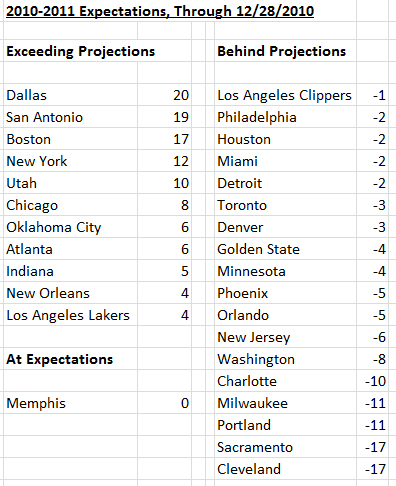 I then created the following table I've dubbed the "Expectations Meter" so that you can see how each of the six systems ranks the thirty teams in terms of expectations. 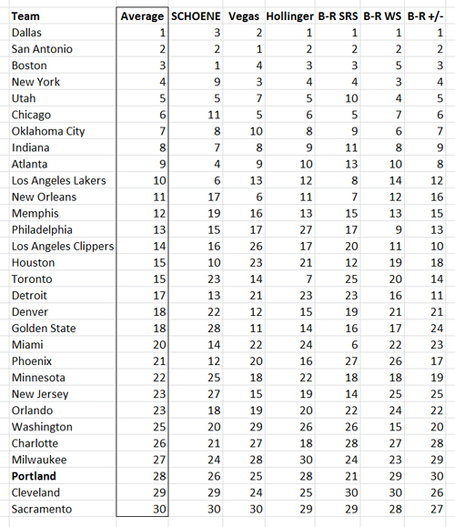 As you can see, the systems were not in uniform agreement on the teams coming into the season. Taking Portland as an example, Basketball-Reference's +/- system says the Blazers have fallen short of expectations to a greater degree than any other team, while its SRS system says nine other teams are coming up shorter. On average, however, the Blazers are 28th on this expectations chart, meaning they are falling short of their average projection from the six systems by more than all but two teams: Cleveland and Sacramento.

OK, time to visualize this information. On the X-axis you can see average projected wins. On the Y-axis, you can see how many wins, on average, each team is above or below that projection based on its extrapolation through games played yesterday. This chart helps call out Portland's unique situation, as the Blazers look like the outlier they have been so far this season.

The teams furthest to the right were expected to be the league leaders in wins entering the season. The teams furthest down are those that have not lived up to expectations by the greatest amount. You can see Portland is essentially by itself in the bottom right, as the team from which big things were expected but that has so far failed to deliver on those expectations.

Interestingly, the Orlando Magic are the closest to the Blazers in terms of teams that were expected to be really good but have fallen short of expectations. As you no doubt are aware, the Magic essentially blew up their roster last week, trading for Gilbert Arenas, Hedo Turkoglu and Jason Richardson.

A few pundits have pointed out that Brandon Roy's knee injury is the biggest NBA story that isn't receiving its proper due nationally. I think this investigation supports that assertion.

When you look at the league's biggest underachievers compared to the major projection systems, the top five are Sacramento, Cleveland, Portland, Milwaukee and Charlotte. Cleveland and Charlotte had major free agent offseason defections/trades so their failure to meet expectations isn't a huge surprise. Sacramento has dealt with a limiting foot injury to Tyreke Evans but has been, so far, a truly horrible team that was projected to be really bad.

Milwaukee is the team that most closely resembles the Blazers, as they were a playoff team last season that has taken a step back to this point. They're also in the midst of the long-term absence of point guard Brandon Jennings, the team's leading scorer and play-maker, but he is expected back this season.

Not only was more expected from Portland than Milwaukee this season, though, more questions exist about the Blazers going forward down the stretch, most of which revolve around how effective Roy can be and how many minutes he will play.

Given these circumstances -- how far behind the projected wins Portland has been and the reasons for that failure to meet expectations -- I think it's more than fair for Blazers fans to feel a greater sense of disappointment and deflation than any other fanbase in the league. On the flipside, that there are a significant number of fans, including the emailer who prompted this post, who are focusing on the positives, is fairly remarkable.

As the season goes along and more games are played, we'll check back into these numbers to follow Portland's progress relative to expectations.

PS: The extrapolated wins do not factor in strength of schedule or home/away. It's a simple extrapolation.