The Portland Trail Blazers looked like a good team bent on being mediocre through sheer indifference, as they fell to the New Orleans Hornets, 97-78, in the Rose Garden on Friday night.

Take a look at this chart of the field goal percentage quarterly splits to experience tonight's Titanic meets Enron disaster. 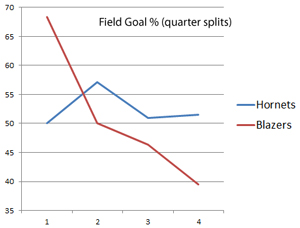 It was spirit-crushing bad, the kind of game that not even an extra Red Bull and some bland post-game comments -- usually a toxic combination after an ugly loss -- can get me fired up to really go in.

The worst part? Coach Nate McMillan appeared to feel the same way. To his credit, he didn't look panicked afterwards and there were no fireworks, as expected. Instead, McMillan meekly chalked up the performance to poor shooting, repeating the statement in answer to virtually every question, steering clear of any discussion of effort, intensity, focus, character or heart.

The question, though, is why? Why give his team a pass in public? Because he's tired of hearing himself say that about his team? Because they're tired of hearing it? Because he decided to address it in private rather than bring it up in public? Because it's an older group that knows better? Because there's so many moving parts -- with Greg Oden's injury and Brandon Roy's health struggles -- that now is not the time? Because there are a few chippies coming up on this next road trip that should buy everyone some more time?

All possible explanations, but one thing is for sure: it's more than poor shooting that this team needs to fix.

There wasn't a single Blazers unit that played particularly hard, or smart, or even just cohesively bad. It was just all bad, and McMillan eventually admitted as much in his final statement: "We're not playing good basketball."

Why? Has the carrot of playoff success shriveled up in Oden's absence? Is the weight of the marathon schedule crushing that ability to provide extra effort in November?

That's what it felt like tonight. A team that used to beat itself up over losses casually checked the score of Boise State vs. Nevada on the locker room television while going through the media motions, resigned to the outcome in the locker room after the beatdown had been delivered because they had resigned the outcome while the beatdown was being delivered on the court.

Outside of guys like Armon Johnson and Dante Cunningham, who didn't play particularly well tonight but at least still bring that "looking forward to my second contract" glow to every minute they play, which rotation members can look at tonight's tape and say they went above and beyond to aid a winning cause?

Brandon Roy's return performance was better than anticipated, as he hit for 27 points and added three rebounds and four assists, but his inability to move quickly and decisively on defense gave a significant portion of those points back.

LaMarcus Aldridge looked trapped in his adjustment back to being the beta dog, his 14 points on 15 shots representative of Portland's inefficient night.

Marcus Camby, who said last week that he and others needed to step up and help carry the burden that was being placed on Aldridge, was as invisible as he's been all season.

Nicolas Batum had a number of nice defensive plays but had nothing to show on offense, aside from an early cut for an easy hoop that Portland could have used about 10 more of.

Andre Miller found himself sitting in the fourth quarter, as Roy's return forced him back into a supporting role that hasn't been his strongest suit.

Wesley Matthews struggled once again coming off the bench, never finding his shot or rhythm in 20 minutes.

Rudy Fernandez suffered, seriously, a "pelvic bone contusion" and played just six minutes, not impacting the game or its tempo in any meaningful way.

Chris Paul tore apart the Blazers to the tune of 16 points, six rebounds and 13 assists, taking just six shots yet ensuring that four of his teammates hit double figures on the way to a red hot 51.5% team shooting and 8-14 team shooting from deep on the road. The Hornets casually dispatched the Blazers like solid playoff teams do to marginal playoff teams, owning the boards (48-27), getting to the free throw line (30 to 14) and moving the ball much faster than Portland's defense could keep up with.

If you're tallying the rotation ledger, you've got one semi-solid performance from Roy in a return coming at the expense of rough nights for your next two guys (Aldridge and Miller), a disjointed performance from your step-in starter (Matthews) and three no-shows (Batum, Camby and Fernandez). That's not a winning formula against anyone, save the dregs of the league.

Both Roy and Aldridge repeated McMillan's assertion that the struggles offensively came from poor shooting rather than adjustments to re-integrate Roy so soon after developing the ability to win in his absence. No other alternative solution, other than making more shots, was provided.
So, 5-10 New Jersey on Sunday and 3-13 Philadelphia on Tuesday, plus the law of shooting averages, offer short-term hope. That doesn't feel like much, with the Boston Celtics lurking on Wednesday to kick off 16 games in the 31 days of December for the Blazers.

To put it frankly, the magic from two years ago has disappeared. The grit from last season has apparently ground up. The excuse from last week -- exhaustion from too much playing time -- evaporated in the face of such a poor performance after an off week. There's not much left except for bad basketball.

The bad basketball isn't coming from nowhere. It boils down to two simple questions.

Who is "buying in" right now? And what are they buying into?

Well, again, you've got to knock down shots. Part of execution is finishing the play off with a bucket. If you're not knocking down shots, you're going to be in trouble. We shoot 33% from the three, 39% from the floor.

We had some open looks, I thought he was turning the ball over a little bit. Brandon was the one guy who had something going, so we needed to try to get some defense. Try and spread the floor. So I went back with Wesley.

Did he sit because of his performance or match-ups?

Tonight, it didn't seem like he had his rhythm.

Again, the first quarter nice job. The energy was good. The ball movement was great. We make substitutions, we get into our second, third and fourth quarter and offensively you can't make any shots. It's one shot. They're one of the top rebounding teams in the league so it was one shot and done at that point.

I don't know. He got caught, he got hit in the stomach. They did some X-rays, came back, I don't know right now.

Status of the team right now

We've just got to do more, if that's possible. The hustle game, knocking down our shots. Making plays. We're not playing good basketball. We're good in certain areas for a quarter or two, but nothing consistent. Nothing consistent. First quarter, great quarter as far as playing defense and scoring. But then second, third and fourth, defensively we made some mistakes. And then offensively we could not put the ball in the bucket. No doubt about it, most teams when that ball is not going in the bucket, if you're able to play through that, you're probably a pretty good team. That's where we've got to get to. Defensively, regardless of what the ball is doing offensively, we've got to win the hustle game. We've got to continue to defend.