Lest you think I stand around all day waiting for Portland Trail Blazers center Sean Marks to make magic, I happened to catch his dunk on tape yesterday because I was taking clips of fellow center Joel Przybilla go through some light workouts after practice, as he continues to work his way back from dual knee surgeries last season.

Blazers coach Nate McMillan said Przybilla participated in the team's live practice on Monday. "Joel did go through practice. Good practice. We'll bring him back on Wednesday, go live again, and Thursday he'll go through that practice, and we'll make a decision on Friday."

McMillan declined to state (or even guess) whether Przybilla would play on Friday against the New Orleans Hornets, as has been hoped for some time. "We wanted to get him into a live practice. We did that. He pretty much practiced the whole time, didn't have to sit out, so we'll see how he feels [Tuesday]. Get him back in another practice on Wednesday and then Thursday and see how he feels. We'll see. This was the timetable, this week, where we had some time for live practices. We'll see what he can do."

Do I have a clear sense where Przybilla is health-wise, conditioning-wise and knee-wise? How ready he is to contribute or how many minutes he'll be ready to play, and when? Not really. Not yet, anyway.

Monday's practice was closed for everything except for light post-practice drills yesterday. In other words, by the time what's left of the media covering the team post-Oden gets a look, all that there is to see if Luke Babbitt and Rudy Fernandez engaged in a three-point shooting contest, Brandon Roy sitting in a chair with his knees wrapped and guys going through light, repetitive work. 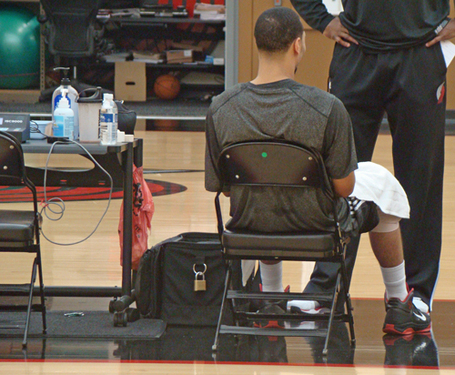 With that said, I'm getting more and more questions about Przybilla's status and return. I aim to please, but all I can tell you is to take a look at these video clips from yesterday's practice. You'll be able to see what we can see. It's nothing revolutionary or particularly exciting, but it's better than nothing.

As for Roy's status, it was a pile of question marks on Monday as both Matt Calkins (here) and Joe Freeman (here) have noted.