Book Review-- Blazermania: This Is Our Story

Share All sharing options for: Book Review-- Blazermania: This Is Our Story

The good folks at Insight Editions have given us a copy of Blazermania:  This is Our Story for review.  Written by Wayne Thompson, the first ever Oregonian Beat Writer and now a senior writer for the team, this hardbound homage to all things Blazer dwarfs any tome ever applied to the subject and is a must-own for any Blazer fan. 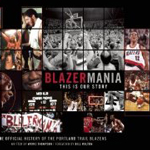 "Dwarfs" is meant quite literally here.  Calling this a "coffee table book" is a serious injustice.  If you slapped four legs on the thing it could be your coffee table.  The pages are large, right around 13x9, and there are 264 of them.  Remember how Scrooge McDuck used to dive through massive piles of gold coins, backstroking to the surface to grab an occasional breath before plunging again?  That's the exact feeling most fans will have upon opening this book.  The visual stimulus alone is overwhelming.  It's not a book you pick up and read straight through.  Each page, each photo, seems designed to be caressed.  You'll want to dive deeply and never resurface.

Let's talk about those photos.  They're easily the most striking part of the book.  From iconic public images to private, stolen moments (a shirtless Terry Porter eating a bowl of cereal in a nondescript Houston hotel room being a particular favorite) the photographs add endless chapters to the story without employing a single word.  Many of them span two pages, making them almost mini-posters.  You could probably set the book on a stand, turn a page every day or so, and remain happy for a year.  Even a casual flip-through reveals the unspoken selling point:  What would you pay to own every Blazer image you've ever wanted, all in incredible quality and many museum-size large?

The accompanying text is comforting and well-paced, in the style of a really good story from your grandpa.  The tale could easily begin by a hearth with the utterance, "Sit down, my boy, and let me tell you about the Trail Blazers..."  It actually starts with the inception of the franchise thanks to Harry Glickman's famous raincoat.  It continues through the championship year, the 80's transitions, the Drexler era, and the decline and fall before wrapping up with an ode to Brandon Roy and hope for a bright tomorrow.  The major figures in almost every era receive generous treatment, including anecdotes and analysis of their impact.  The flow of the team weaves in and out throughout, often down to details from specific games sure to dislodge pleasant (occasionally not so pleasant) memories for those who experienced them.  The book abandons any conceit of linking Blazer Basketball to any societal or cultural evolutions.  The Blazers are the center of this world and everything else revolves around them.  Having the backdrop venture no further than the Memorial Coliseum or Rose Garden, with a brief trip down Broadway, keeps the gravity light and the reading brisk.  The eras don't feel rushed but neither do they overstay their welcome.

Liberally-sprinkled quotes from Blazer legends bolster, and sometimes break up, the ongoing narrative.  The jacket boasts behind-the-scenes views, which the book does deliver.  These are more engrossing than shocking.  Example:

Still, Ramsay rarely started rookies, and he wasn't about to start Drexler.  Drexler sought him out in December, saying if he didn't get 25 to 30 minutes a game by the All-Star Break, he would ask for a trade.

"Clyde, you know you have a couple of All-Stars ahead of you," Ramsay said.  "I can't just put you in front of them."

"Why not?" was Drexler's response.

A little while later, Drexler did ask for a trade.  "But I was really trying to force Jack's hand to play me more," he says now.

Such stories are interesting, illustrating that the path wasn't always rosy even in the most well-regarded times...valuable perspective for fans in this modern, "know everything two seconds after it's said" era.  But this is neither a complexity-seeking monograph nor a tell-all scandal sheet.  We're not talking progressive rock, heavy metal, or experimental jazz here.  This is the Reader's Digest 100 Favorite Blazer Carols boxed set with fascinating liner notes about how the songs were composed and published.  Nothing in the story's seamless integrity will come close to interfering with the reader's devotion to the franchise.  But that's the way it's meant to be.  Sometimes you just want want to revel in familiar carols, particularly when they're sung well and come in such a fancy package.

The book has two shortcomings:

As the eras approach the modern the inside view becomes opaque and the "Company Store" aura becomes harder to swallow.  It's understandable that as anecdotes and quotes start to involve people still active in the league, if not with the franchise itself, discretion starts to rule.  If you don't exactly feel you're getting the whole story in the early parts of the book at least you feel you might be getting more of it than you've ever had.  In the latter parts you can't help but feel you're getting far less of the story than you already know.  A complete neophyte would likely glean from this book that the Blazermania started gloriously and did not abate, becoming less controversial as the decades progressed, not more.

To the author's credit the "Jailblazer" moniker made print but the treatment of Bob Whitsitt and the era over which he presided is likely to cause even the devout to roll their eyes.  You'd expect no different.  The current was always flowing that way.  But the glory years stories provide high banks to focus and propel the enthusiasm.  The erosion of the Dark Ages provides no such support, leaving the narrative in a big puddle.  Neither can the new hope of the Roy-Aldridge-Oden era resurrect the momentum, as that story has yet to be told in full.  The happy side-effects of Greg Oden's injury receive a full hearing but Oden's prognosis cannot.  Kevin Pritchard is described in glowing terms but his dismissal isn't mentioned, let alone explained (naturally).  Reality becomes an unwelcome intruder by the fireside and, aside from marveling at the still-astonishing photo work, the impulse is to page back to the earlier legends rather than continue.

The second shortcoming is more subtle.  The story appeals far too often to, "Blazer fans felt this way about this matter."  Anyone who has spent more than a second at a site like this one knows that Blazer fans as a whole never feel one way about anything.  The title, "Blazermania: This Is Our Story" implies that the fans are part of the process.  Yet precious few, if any, reflections from fans on the various eras appear.  If Blazermania was to be described as a collaboration, an offset piece with actual fan recollections would have been welcome...even more so if those recollections had conflicted with each other occasionally, showing the true depth of the fan base.   The author chose quotes from philosophers to decorate the corners of many pictures and pages.  Short quotes from actual Blazer fans would have served far better than Virgil and Aristotle.   As it is, the tertiary title line "The Official History of the Portland Trail Blazers" should have followed the colon in the main title.  The "Our" in "This Is Our Story" is not inclusive.  It means "Here is the Portland Trail Blazers' version of this story and you fans are going to love it and buy it."

The grace of the book is that their assertion is correct.  Fans are going to love it and really should buy it.  These are the fairy tales, the Founding Fathers, the hymns and rituals of the Blazer culture.  Experienced fans will feel emotion welling up inside them perusing multiple pages.  Newer fans will find a depth unguessed and perhaps gain insight into some of the pathology that life-long Blazer supporters seem to evidence.  And how can you not be charmed by a book that throws in a perforated sheet of classic trading cards, a plastic-wrapped, hand-written stat sheet from a 124-119 victory over the Phoenix Suns, and a full-page picture of Maurice Cheeks with his hand on Natalie Gilbert's shoulder?  The entire book is a carnival for the Blazer fan's soul, complete with cotton candy, thrilling (but entirely safe) rides, and a new sight around every corner.  Whether or not you are better informed when you leave you'll have enjoyed yourself mightily.  More importantly, you'll carry a whole new crop of memories.

This is an easily-recommended buy for any Blazer fan and an absolutely no-brainer gift if you're shopping for a Blazer fan this holiday season.  It'll be the present they're looking at after the opening is done.

Blazermania:  This is Our Story

Available at Blazers.com or Amazon.com or retailers near you.