We take a brief moment from your Blazer-induced euphoria to share some of my own.  I'm quite happy to announce the birth of Baby Ali, who came into the world on this, the first day of the Portland Trail Blazers' 2010-11 season.  She weighed 8 lbs, 8 oz which all but guarantees she'll be a Nicolas Batum fan. [Update: Just found out she's 22 inches long.  Could this baby get any more Blazer-ish?]  Life is good.

When my son was born he had huge hands like a point guard, so it wasn't hard to figure out what he was going to do with his life.  Still waiting on that 2026 draft.  (As, I'm sure, is Rich Cho.)  I don't know what Ali will do.  Wishing her a WNBA career doesn't feel the same and I'll be in an early grave if she wears those Blazer Dancer outfits.  So all we can say with confidence is that the world has another great Blazer fan now.  I'm pretty sure my son, at some rebellious, teenage juncture, is going to show up at the dinner table in a L*kers jersey just to spite me.  But my sweet daughter would never do such at thing, right?

Anyway, say hello to my next thirty years of neurosis. 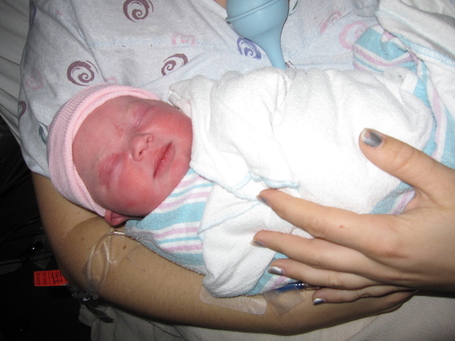