The Triumphant Return Of Steven Hill

Share All sharing options for: The Triumphant Return Of Steven Hill

"I was at home watchin' my Arkansas Razorbacks," Blazers center Steven Hill told me today through some laughter. "I was in Arkansas watchin' my Razorbacks playing Texas A&M and beat them. My agent calls and says, 'Do you want to go to Portland?' I said, 'Let's do it.'"

And just like that we all collectively flash back to 2008, when the bushy-haired, bearded big man battled for the team's 15th and final roster spot with Shavlik Randolph. 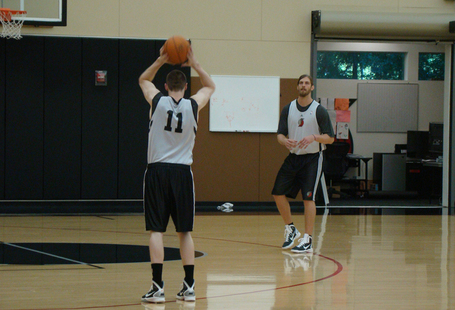 After Randolph won out, Hill's long professional journey really got started. "Oh gosh, as soon as I got waived here two years ago Oklahoma City picked me up," Hill says, trying to the dates in order. "They kept me to January of that season, went down to the D-League, had a little minor knee surgery. Last year I was in trainign camp with Chicago, they waived me during training camp and from there I was in the D-League but I was hurt a lot last year with a lower back problem."
Hill says the D-League worked well for him as a way to stay in front of talent evaluators. "A couple of years ago I was a borderline guy with the Thunder," he explains. "I went down to the D-League, keeps me here in front of people. I was on a team in Tulsa where the coaches put a big emphasis on development. Hence the name, obviously. I look at it as a place to get better."
Blazers GM Rich Cho speaks highly of Hill's work ethic and personality and Hill says it's good to feel wanted. "I know Rich from Tulsa, he was over the minor league operations from Oklahoma City and also when I was in Oklahoma City. I feel real comfortable with him, how he likes to run things, what he expects and hopefully he can know a little bit about what to expect from me too."
Given his long road, Hill is realistic about the situation in Portland. "As far as I know it's one of those training camp deals. They have a lot of guys in camp. They need a 5 man." He also said he is ready to contribute tonight if called upon. "I'm dressing out, I've got my physical done, I signed my contract so I'm available. I just want to come in here and be professional, come in, get my work in, know my role, play hard defensively, facilitate some offense and bring a good attitude to the locker room." 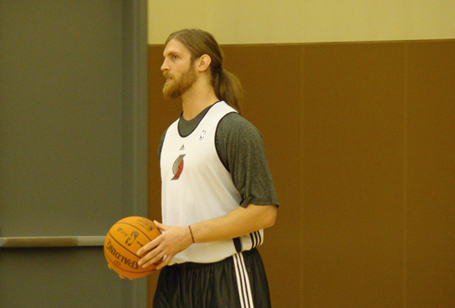 Blazers coach Nate McMillan sees Hill's addition as a marriage of convenience. "He came in and had a good camp [in 2008]," McMillan remembered. "He knows some of the things that we're doing. He's kind of familiar with our system and everything. We needed a big body to bring into camp. He was available and I thought it would be good to bring him back. I'm glad to have him back."

McMillan said today that he would start his regular five -- including Marcus Camby in the middle -- and that he wasn't ready to commit to playing Hill tonight. "We'll see," McMillan said. "We'll go with our guys that have been here. It's a lot that he's going to have to pick up." 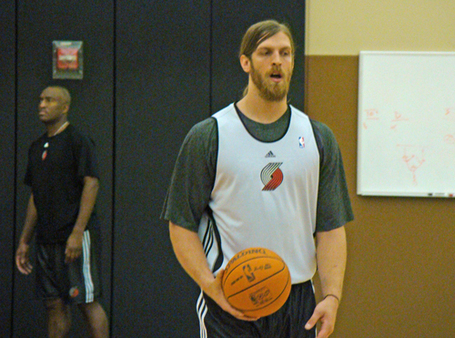 Hill admitted that he is aware of the perceived Blazers big man injury curse but he's not afraid of it. "Noooo. Noooo," he said chuckling. "Of course not. I was in Portland for a couple months a couple years ago and I was treated really well. I've had no issues health-wise here and was really looking forward to getting back."

PORTLAND, Ore. - The Portland Trail Blazers have signed center Steven Hill, it was announced today by General Manager Rich Cho. Per team policy, terms of the deal were not disclosed.

Hill, 24, appeared in one NBA game for the Oklahoma City Thunder in 2008 before being assigned to the NBA Development League's Tulsa 66ers, where he averaged 3.6 points, 3.5 rebounds and 1.33 blocked shots in 18 games over parts of two seasons from 2008-10.

Undrafted out of the University of Arkansas, the Trail Blazers signed the former SEC Defensive Player of the Year in August 2008 before waiving him prior to the 2008-09 season. Hill (7-0, 245) averaged 1.0 points, 0.7 rebounds, 0.67 blocked shots and 9.0 minutes in three preseason games for Portland that year. He was previously a member of the Trail Blazers' 2008 NBA Summer League team.

With Hill's signing, the Trail Blazers' roster stands at 19.