Coach Nate McMillan and guard Andre Miller engaged in an argument that could be heard by reporters in the Portland Trail Blazers' Practice Facility's media holding room this morning.

After practice, McMillan refused to comment on the confrontation and said he was addressing the team and not a specific player. Miller was not visibly present at the facility once the media was let in. McMillan also took longer than usual to address the media.

McMillan noted that Miller did not practice due to a sore back suffered during a fall during Monday night's game against the Los Angeles Clippers and painted the exchange as a team conversation rather than a confrontation with an individual.

General Manager Kevin Pritchard was present once the media arrived and said in response to questions about a verbal confrontation during practice, "what we want is open dialogue."

Pritchard was calm and composed during his remarks, perhaps slightly taken aback by the questions.  For a guy who wears his emotions on his sleeve -- particularly lately in the wake of all the injuries -- he did not give off any noticeable signs of frustration or anger over the incident.

McMillan was quick and curt in his responses, clearly viewing the discussion between himself and Miller as a private team matter.

Miller recently expressed frustrations with his role on the Blazers in an interview with The Columbian's Brian T. Smith... 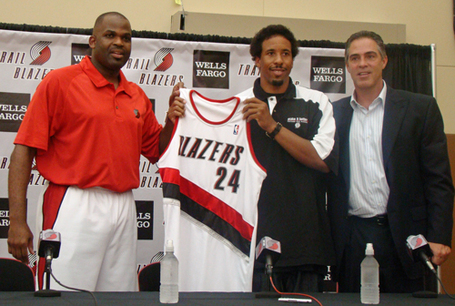 This picture was not taken today. Photo: Ben Golliver / Blazersedge

Jason Quick of The Oregonian has the most detailed account of the confrontation. He writes...

One of the topics discussed was an incident late in Tuesday's game with Memphis, when Miller told Jerryd Bayless to make his second free throw with 4.3 seconds left and the Blazers trailing by two. The coaching staff and team captain Brandon Roy told Bayless to miss the free throw so the Blazers could attempt to rebound and make a tying basket.

Miller was not on the court when the media was allowed into practice.

Miller loudly disagreed with McMillan, at one point stating, "I ain't going to take this (stuff)."

McMillan later fired back: "You don't play the way we want to play."

Smith clarifies that the confrontation took place after the team's 3 on 3 practice had completed.

Roy said exchange between McMillan-Miller happened after practice was over during an 'open forum.'

Joe Freeman of The Oregonian tweets...

As for the practice dust up between Miller and Mac.

It lasted roughly a half-hour and was animated and sometimes heated.

Part of it had to do with Miller telling Bayless to make his 2nd free throw with 4.3 seconds left vs. the Grizzlies. There was lengthily debate about that w/ Mac telling Miller at one point that the call comes from the bench, not him.

But the debate seemed to stretch beyond the FT incident and into Miller's role with the team.

Nate McMillan's comments on the conversation with Miller.

We had six guys that could practice today. We were only limited with what we could do. It was a short practice

Will Andre play tomorrow because of his back?

How long has the back been the issue?

I think before the game. He was getting some treatment before the game. I think that happened in the Clippers game. He was able to play through it in the Memphis game. He was reaching for it. It was pretty sore. Today he didn't practice. I don't know exactly when it happened but I think it did happen in the Clippers game. I knew that he had a sore back in the Memphis game. Today he couldn't go. LaMarcus couldn't go. Brandon and Blake were out.

Andre has been vocal about not knowing his place with the team. How would you describe his place right now?

That's a conversation for us [Nate and Andre] if that's the case.

How would you describe his play?

Any lingering effects from this?

Jason Quick, in an update to his post, has further comments from Kevin Pritchard.

Gavin Dawson has tweeted that both Nate McMillan and Andre Miller will address this morning's confrontation on John Canzano's 95.5 FM radio program this afternoon.

Brian T. Smith has posted a full story on the incident.

What followed was more than 20 minutes' worth of shouting, curse words and fierce challenges that mostly came from the mouth of Miller. The conversation and actions of Miller and McMillan were not visible, due to the fact that practice was closed during the exchange. However, the voices of both could be heard carrying through a wood door that opens from the media room to the practice floor.

When asked Thursday about Miller's confusion with his role, McMillan said: "That's a conversation for us, if that's the case." Meanwhile, Pritchard addressed the same issue by saying, "There's an old saying out there: 'Seek to understand before being understood.' "

When we were allowed in to the facility Miller was nowhere to be found, and Coach McMillan refused to comment, though GM Kevin Pritchard offered some spin. "What we want is an open dialogue," said Pritchard. These sorts of things happen, he continued, "if you're a good team."

Asked to weigh in on what transpired between McMillan and Miller, Brandon Roy looked far off into the distance. He wanted no part of it, but said Miller is "trying to feel his way through this team," and that "everybody is a little frustrated. It happens when expectations are high."

It seems safe to say now, that Miller's ticket out of Portland is as good as punched.

The Blazers GM is, to his credit, one of the League's most relentless sunshine merchants, at least in the media (and for all I know, in private too). He found some little good thing to say even through all of the Greg Oden microfracture, and that's no small feat.

It was obvious a month ago that the dislike for Miller, whether it originates from Brandon Roy, Nate McMillan, the entire team or whomever, is going to inhibit his ability to fit into this organization. At that point, there was no reason to delay his exit, once Dec. 15 came and went.

However this exchange evolved, it was likely something that had been brewing for a while for Miller. Emotions run high in sports. Competition is the nature of the game. While Andre Miller may not display his emotions for the rest of us to see, he is undoubtedly a competitor. He wants to play and he wants to win. And there's no fault in that. McMillan, who labeled it as a "team discussion," encourages dialogue and communication from his players as much, if not more, than any coach in the league. Today, he got that communication from the free-agent acquisition.

The bottom line is this: if Andre Miller is complaining about his playing time, his role, his purpose on this team, then good.

Maybe somebody will listen.

Coaches and players are not always supposed to see eye to eye. Especially when you have two strong personalities like Miller and McMillan, there is going to be a clash. Obviously the Blazers have a policy where players can speak their mind. Today, Andre Miller did. I'm not seeing this as Andre Miller sealing his fate here in Portland, I just see it as a discussion between player and coach trying to get back on the same page.

Honestly, it's a bit of a shame this is being portrayed as such a big deal. There's this sinking feeling that there is so much more to the story than we may ever know. It's confusing because Nate's been quoting as saying he wanted Andre Miller here and Andre Miller saying how much he wanted to be here. I think the lack of concrete details is leading to speculation, and that's only human nature.

So before everyone gets too Millergate on this, it's pertinent to ask what the big problem is with them having an argument. It demonstrates a disconnect between player and coach, yes, but not of team rules or public conduct or, thank the basketball gods, legal issues. They were arguing about strategy and have probably argued at other times about minutes. Those are things that have to do with winning basketball games.