Aaron Grossman, the Portland Trail Blazers' Vice-President in charge of Number Crunching, pulled a doozy from his hat the other night...

Brandon Roy is the only Blazer in history to score 23-plus points in 15 straight games in a season. The previous record was 14 by Geoff Petrie from Feb. 4-March 2, 1971.

Roy has long been a model of offensive consistency but that 15 game streak -- starting December 1 in Miami and running through Saturday night's game against Golden State -- represents a career peak in terms of overall offensive effectiveness.  Surveying his game logs was so impressive that I decided a trip back to the Synergy archives was warranted. Any time Roy does something Clyde Drexler never did, it's time to snap to attention and dig a little deeper.  Here's what I found.

Let's compare Roy's numbers before the streak (games played from October 27 through November 28) to those during the streak (December 1 through January 2).
First his simple box score stats.

These numbers should come as no surprise.  In the wake of Greg Oden's injury (December 5) and subsequent injuries to 632% of the Blazers roster, Roy started playing much heavier minutes and shouldering more of the burden on offense.  He responded by increasing his scoring considerably.  Rebounds and steals increased.  His assists numbers remained essentially the same while his turnovers also increased. (More on the turnovers below.)
Now let's turn to the advanced statistics provided by Synergy.

PPP refers to "Points Per Possession," that is the number of points generated by any offensive player on those possessions when he attempts a shot, is fouled or commits a turnover. PPP is a nice bellweather measure for overall offensive effectiveness.
aFG= Adjusted FG% is designed to determine the impact of 3 point shooting on a player's field goal %  aFG%= [(Total Points-Free Throws Made) / FGA] /2

%TO = the percentage of possessions the player turns the ball over

%SF = the percentage of possessions where the player is fouled in the act of shooting.

%Score = the percentage of the player's possessions where they scored at least 1 point.

As Roy has proven to be a versatile offensive weapon, accurate overall shooter and skilled at getting to the free throw line, his PPP rating has historically been very good.  Last year, for example, Roy's PPP was among the league leaders at 1.02, earning him an "Excellent" rating from Synergy.  As you no doubt remember, Roy started this season relatively slowly, struggling to mesh with Greg Oden and struggling from the field some nights.  Nevertheless, his .095 PPP was still solid, worthy of a third consecutive all-star appearance even if it hadn't improved.
But when November turned into December and his minutes and points increased, Roy did what few players are able to do: he greatly increased his efficiency too.  This morning, Kevin Pelton called Roy's leap from .95 PPP to 1.05 PPP a "significant jump" and noted that Roy's efficiency of 1.05 PPP during the streak is fairly described as "hyper-efficient."  (Below, I'll compare that number to some other league leaders.)
Put another way: During those 15 games, Roy was responsible for 390 possessions and for each and every time he had the ball (including turnovers, short shot clock shots, etc.) he contributed more than a point.  All with defenses keying on him as he played alongside backups, rookies and in nontraditional three-guard looks.  More than a point. Every. Single. Possession.
Where Did Roy Improve?
Roy's rise in effectiveness can be attributed first and foremost to much improved shooting.  You probably saw the graphic on television last night that showed Roy shooting 49% overall from the field during the streak, impressive for a guard and significantly above his field goal percentage earlier this season.  But when you break down Roy's shooting, it's clear that improvement hasn't come across the board.  Take a look...

What jumps out here is that an earlier conclusion from this season -- that running Roy off of more screens would increase his effectiveness -- is no longer a reality. His shooting off of screens, which was incredible earlier in the year, has come back to Earth pretty quickly.

To make up for that drop, though, Roy has found easier ways to score: cutting off the ball and hitting the boards to get some chippies.  Although neither of these categories represents a huge part of his offense, scoring easily off cuts and junk putbacks makes Roy's offensive life a lot easier.

As you can see, the largest situational field goal percentage increase is Roy's shooting off of pick and roll sets.  Of course, the big disclaimer here is that a pick and roll for Roy is more accurately described as a "pick and drive" or a "pick and pull up."  Nevertheless, the bulk of his shooting improvement has come from this situation, one with which he is very familiar.  And if you look at a comparative breakdown of the most common types of plays that featured Roy before and during his streak, you'll see a shift towards more pick and rolls in his offense.

Put in simpler terms: During his streak, more pick and rolls for Roy went hand in hand with better shooting and effectiveness in those situations.

It's particularly interesting to consider that Roy played much of this streak without a true center setting his picks, as both Greg Oden and Joel Przybilla went down with knee injuries. If not for LaMarcus Aldridge and a hot-shooting Juwan Howard keeping defenses somewhat honest, it's a wonder more teams didn't aggressively work to force the ball out of Roy's hands during this stretch.  Look for that to change, if it hasn't already (as evidenced by the Clippers last night).

After Saturday night's win over Golden State, Nate McMillan told reporters, "[Roy] has stepped up. I've talked about what the rest of the team is doing. But what he is doing for this team right now by example, it's MVP type of stuff."

It's a nice thing for a coach to say about his star player and McMillan was speaking as much about the intangibles of leadership and consistency as he was about statistical output.  Given all the recent injuries, numbers are the last thing anyone seems to be thinking about.  Indeed, McMillan reinforced this point when he told me, "Early [this season] when we had so many guys everybody was worried about their time and their roles and who they were playing with and their shots. This group is not worried about that, they're playing basketball. When their number is called, they're going out there and doing what it takes."

I'll leave the emotional arguments for Roy as an MVP candidate to his coach and fellow players.  Why? Because the numbers alone suggest he should be in the mix.

Let's look at the league's two premier players on the league's two premier teams: LeBron James and Kobe Bryant.  Over the same time period as Roy's impressive streak, both James and Bryant lit up the league too.  James was named Player of the Week, scored 40+ 3 times, and powered his Cavs to a league-best 14-3 record in December, helping Mike Brown earn Coach of the Month honors. Meanwhile, Bryant was named Player of the Week twice, scored 40+ 3 times, and led the Lakers to a 12-3 record in December.

Overall, the per-game and per-minute stats favor LeBron James over both Bryant and Roy.  Side-by-side, it might surprise you how closely Roy hangs with James and Bryant.  It surprised me.  But if we turn again to the per-possession efficiency numbers, Roy acquits himself even better. 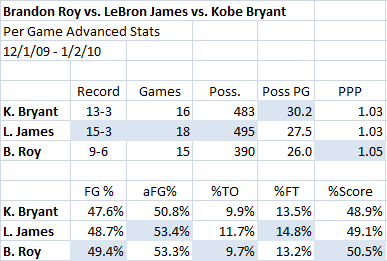 Playing in much slower offenses than Bryant, it's no surprise that James and Roy handle the ball on less possessions per game.

That said, of the three players, Roy shot the best from the field, turned the ball over the least, scored on the highest percentage of his possessions and generated more points per possession during this time period.  Impressive stuff.

Based on this body of work, McMillan was more than justified in including Roy in the MVP discussion.  And Roy deserves extra-serious consideration for NBA Player of the Month for December. (Which he probably won't win.)

PS Thanks to the Invisible Ninja for the data, as always.