Well, there are a number of good reasons that the Golden State Warriors are 9-23 on the season after losing to the Portland Trail Blazers 105-89 in Portland Saturday night.  They're young.  They're undisciplined and inconsistent.  They have issues rebounding. They're stretched health-wise.  Their roster is suffering from a high-end talent vacuum after trading away Stephen Jackson.  And, perhaps most importantly, Monta Ellis isn't as good as he believes he is nor as good as he said he was after Golden State's November defeat of the Blazers.

Ellis's line -- 30 points, 5 rebounds, 4 assists -- approximated the numbers put up by Brandon Roy -- 37 points, 6 rebounds, 5 asssists--  but the similarities stopped there.  Ellis used 25 shots to get his 30.  Roy used 16 to get his 37. Ellis took 4 free throws. Roy took 14. Ellis had 6 turnovers in 47 minutes. Roy turned the ball over once in 41 minutes.  Ellis exploded then disappeared.  Roy chugged along, slowly but surely, saving his best for last: 13 fourth quarter points. After the game, Nate McMillan said simply, "[Roy] has stepped up. I've talked about what the rest of the team is doing. But what he is doing for this team right now by example it's MVP type of stuff."

Out of the Blazers' top ten scorers last year, Roy was the only one to suit up tonight.  Of the eight players that dressed, just four were Blazers last year.  Two of those four -- Martell Webster and Shavlik Randolph -- combined for 42 minutes total last season. Webster, who put up a sparkling 21 points, 11 rebounds, 3 assists, 2 blocks performance, played 46 minutes tonight by himself.  Two totally different worlds.

While Roy carried the scoring load, particularly in the wake of a relatively awful 2-11 performance from Jerryd Bayless, the Blazers were able to fight back from a double-digit first quarter deficit thanks to their defense, which again mixed man-to-man and zone looks to frustrate their opponent.  After a hot start, the Warriors were unable to hit from distance (just 3 of 12).  Minus a few Sportscenter slam dunks from Anthony Morrow and Anthony Randolph they struggled to get clean looks from anywhere on the court.  After putting up an amazing 41 points in the first quarter, it took the Warriors 31 minutes 58 seconds of gameplay to score another 41 points.  In other words: Ice freaking cold.  Check the chart, which shows the two teams' field goal percentage splits at each of the four quarters. 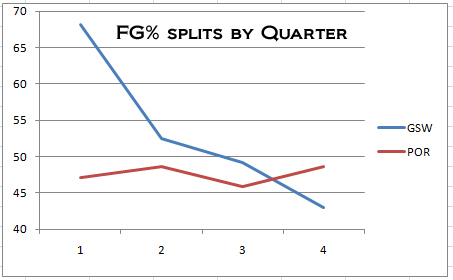 They went so cold you might call them Enron.

The overall defense from the Blazers was solid but somewhat gimmicky again.  Webster moved up to the power forward spot and brought great effort. Dante Cunningham, considered a combo 3/4 by Blazers scouts when they drafted him, slid all the way up to the 5 for extended periods tonight, manning the middle of the zone and going eye-to-eye with Golden State's smallish bigs. After the game I asked Cunningham if Blazers management or coaching staff had ever mentioned playing him at the center spot at any point during the pre-draft process, over the summer or at training camp. "It was never center," Cunningham said. "I don't think I was ever, ever stretched out from the 6'9" area to be a center."

At what point exactly did Cunningham know he was going to be the man in the middle, a spot previously held down by defensive stalwarts Greg Oden and Joel Przybilla? "Tonight," he grinned. "I'm learning [our defenses] every day better and better. It's not that hard any more. And you know, our offense is built in such a way that you can be out there and you can be able to easily change the 4 to 5, it's pretty much the same. We had Martell [go] from the 2, 3, 4, all the way down. It doesn't matter with this offense."

Willing to do whatever it took to get the win.  Led by their all-everything captain who stood a cut above the competition.  That was the difference, again, for the Blazers tonight.

I thought we got up and we played. We got closer to these guys. I thought we did a better job of squaring up and keeping our shoulders square and containing and not giving them penetration. Our transition defense was pretty good throughout. But halfcourt, we just acted like we couldn't guard these guys so it was a challenge.  Offensively we scored 31 in the first. We knew we could score but we just had to start playing defense. We started doing that, containing and contesting and they started missing some shots. We give up 41 in the first and then for the 2nd, 3rd and 4th we give up 48. So the defense tightened up, offensively great job of playing off of Brandon and Miller in the post. And getting to the free throw line and just another solid effort by our guys.

Injuries mount up, winning continues. What does that say to you?

Well, I think it was, for me, it says, it's an old saying that it's amazing what you can do when no one cares who gets the credit. Ok, and I think early in the year we were concerned about minutes and rotation and shot attempts and combinations and this team is just playing. And they're playing free and they're playing guys whatever minutes they play with or get they're going out and they're making the most of it. They're rotating them in and they're executing down the stretch on both ends of the floor. I think you see a team now that's free as far as their thinking and how they're playing. They've been able to come up with some good wins.

Martell's best game of the year?

He was great tonight. I thought he did a nice job of filling in at 4. We started out big and they jumped on us really quick and went with Bayless and moved Martell to the 4. He's been rebounding, I think, all season long. I felt like he's been doing that. Tonight he had a couple of big blocks and then when he's knocking down his shot we have that lineup, that's a hard team to defend. We had to make that adjustment to go small with Miller, Brandon, Bayless and Martell and basically due to the injuries, we could do that and it worked out for us tonight.

Cunningham instead of Pendergraph because they were smaller?

Late in that game I was just trying -- Brandon and Miller had played pretty much the whole game. I was trying to rotate those guys, between Bayless, Brandon, Miller, get them a quick breather. Get them back in the game. DC started doing a nice job of rebounding and defending so I stayed with him late in the game against Corey [Maggette] and he did a nice job, I think he came up with a steal, a stop, and then he was knocking down his shots, some big rebounds and we went back with Miller. It just felt like he could play against Randolph when they had their smaller lineup.

I thought it was great. This guy has stepped up. I've talked about what the rest of the team is doing. But what he is doing for this team right now by example it's MVP type of stuff. Where you talk about a player that's most valuable for his team, what he's doing, not only is he scoring but he's trusting his teammates and that is big, when you have a young guy like Bayless and Martell taking big shots, if they miss he's telling them to continue to shoot. When the game is on the line, he's stepping up and making the play. He's been great for the last month.

Just a matchup. Howard could post up, he can shoot the ball as well as defend.

Blake is two weeks out?

Hopefully it's not that, we're not that far out. Maybe these next few games but hopefully we can get him back.

The matchups tonight wasn't for Jeff to be out on the floor.  Howard and DC was doing a good job so I stayed with that group.

That was the key. Not turning the ball over. We turned the ball over late and they were able to run out and get some easy buckets. But at the half we had maybe six turnovers so we started pretty much like we did when we played in Oakland. We started turning the ball the second half, we lost control of the game, eventually we lost the game. Tonight we started to turn it over, we cleaned it up and we went into the post. It was the same game plan in Oakland, we had bigs they kind of took out. But tonight Brandon and Miller were the two guys we wanted to post up and play through. We got to the free throw line, they made good decisions and we were able to get this game.

Does Andre Miller benefit from the freer play you described earlier?

I think it benefits all the guys, it's not just Miller. When I talked about freer, I meant the group as a whole, not individually. Early when we had so many guys everybody was worried about their time and their roles and who they were playing with and their shots. This group is not worried about that, they're playing basketball. When their number is called, they're going out there and doing what it takes.