Brandon Roy is an All Star Again

Share All sharing options for: Brandon Roy is an All Star Again 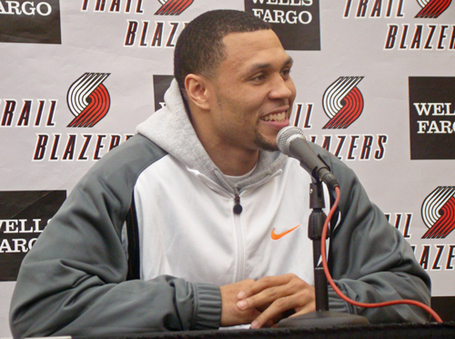 As announced this morning, to no one's great surprise, Blazers guard Brandon Roy was selected to compete in his third consecutive All Star game.  "It feels great every time," Roy said this evening at a press conference with reporters, "It just doesn't get old."

Perhaps the funniest moment of the press conference came when Brandon Roy described playing hoops at home with his son, Brandon Jr.

He's a bigger basketball fan now... He knows his players now... I came back from a trip to Cleveland and he's like, 'LeBron blocked your shot, I'm mad!' And I was like, 'it was goaltending!' ... He knows the game now. I don't think he knows all stars and things like that but he's paying attention now. He's at home and he wants to be Jerryd Bayless and I'm Greg Oden and I think his mom is Steve Blake.  He knows the game, he's watching.

Click this link to listen to the audio: Brandon Roy Presser Audio.
Roy was at his charismatic best and it's worth the 16 minutes of your life. Roy tells a number of funny stories, discusses what the selection means to him, who he called first with the news, his current health, his recent platelet therapy, his expected recovery timeline and a lot more.  Here's the first five minutes or so of the press conference transcribed.
Opening Remarks

It's good to be announced an all star for the third straight year and it's kind of tough right now because I wish I was in Houston with the team. But unfortunately I have to be here. But once again, it's exciting news for me. I remember coming into the league my rookie season, I thought being an all star would be a great accomplishment because all the players I looked up to, they were all great players. I never really thought of myself as being a guy who would maybe be an all star so quickly in my career. Since I am, I just look back to what got me here. It always comes back to, of course, my family and my teammates. Every year they've done an incredible job of putting one of our guys in the position to make the all star game. I'm excited to be one of the leaders on this team. I miss not being with those guys. They're the biggest reason why I'm here today to be able to be an all star. Of course I thank them, the coaching staff, this entire organization, just for their support, allowing for me to be myself and play my game. Because of that I'm here for the third straight time.

Will you be healthy enough to play in the game?

I'm looking forward to when the team comes back from this trip to getting back out there on the practice floor. My goal is to play hopefully this week. That would put me in position to play for the all star game. But, you know, again we always want to be cautious with this hamstring. We don't want it to keep reoccuring. I look forward to trying to go out there this week to play. I will hopefully be back a few weeks before the all star game.

A different feeling this time around, the third time?

Every time I get the news I get this big smile on my face. I think to call my parents to let them know. It feels great every time. It just doesn't get old. I was sitting there and thinking my second year when KP called me and he said you made the all star team, I was like extremely excited but all I could think about was the pressures of having to make it next year. I think that's why it doesn't get old. Because I don't look back. I always look forward to new things. Now I'm like, great, 3 times, now you've got to prepare for next season which is going to be 4 years. I always try to play my game, play within the team concept, and it's great that things have worked out for me. It felt great again today. Everybody called, it sounded like it was the first time I made the all star game again. That made me feel good.

You signed your contract last summer. You didn't settle this season. What does that say about you as a player?

That was a question that maybe some doubters had about me. I always go out and play as hard as I can for the 15 guys in the locker room, for the coaching staff. That never crossed my mind. I feel like I want to be a great player in this league and the contract and those things have nothing to do with it. I wanted to be successful for this team and this organization no matter what, how much money a guy gets paid. I never even thought about it. Alright the contract is signed, how can we be the best team this season and how can I be the best player I can be? I put those things behind me. I'm not one of those guys that look in the past, I accomplished this, or I did that so I'm going to get comfortable. There are always new goals I can set and achieve and that's how I'm going to continue to be.

Who did you call first?

I called my parents. It was my mom's birthday today and I called her and I was asking her about the gift I sent her. I had totally forgot. I was getting ready to hang up the phone and I'm like, 'oh mom, I forgot, I made the all star game.' She's like, 'Brandon that's the first thing you should have said!'  It was kind of funny. We're talking and I'm just, I was excited, I am just happy for her. 'Mom, it's your birthday. And did you like the gift?' She was excited, the last minute before I hang up, I'm like, 'Oh I forgot, I made the all star game.' I thought that was pretty cool. They're always the first people I call. Since I was a little kid, if I made an all tournament team I called them. It's no different being in the all star game.

Thoughts about playing in front of a massive crowd in Cowboy Stadium?

I didn't think about it until me and my brother were watching tv, and on the bottom of the screen it said 85,000 seats sold already. My fiancee Tianna was like, 'Is that a lot of people?' I was like, 'We seat about 20,000 people.' And I was like, 'It's going to be like a football game.' That kind of helped her understand the magnitude of it. As I was explaining it, I was like, 'man, what is it going to be like playing in front of that many people? It should be fun.' I never dreamed I would play in a game so big but I'm excited about it. It's a lot of young talented players who is going to be in this game this year and for the first time I'm not the youngest guy any more. I looked at the list and it's like Kevin Durant, Derrick Rose and Rondo, and I'm like, 'Cool, I'm not the young pup any more.'

Click through to read the team's press release announcing Roy's selection and to see more photos from the press conference.

"With this his third straight selection, Brandon Roy joins an elite group of Trail Blazers to represent Portland in the NBA All-Star Game," said Trail Blazers General Manager Kevin Pritchard. "Brandon is as much a winner off the court as he is on the court, and we are honored and appreciative of the NBA coaches for selecting him to represent the Western Conference."

The 2010 NBA All-Star Game tips off at 5 p.m. (Pacific) on Sunday, Feb. 14, from Cowboys Stadium in Dallas. The event will be televised live on TNT.

The Many Faces of Brandon Roy 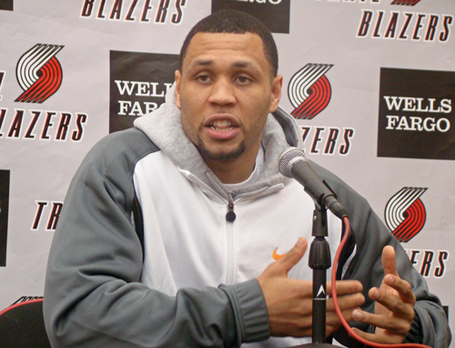 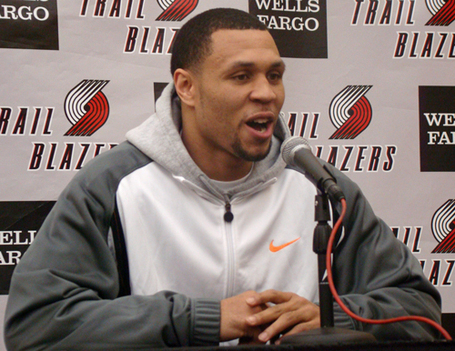 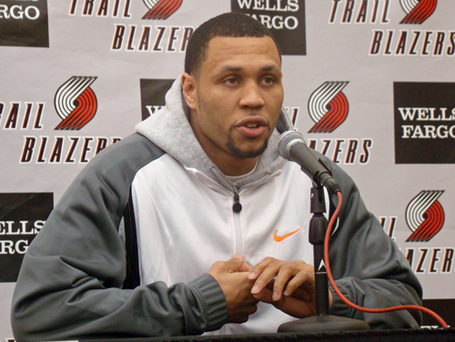