Share All sharing options for: Impressions from Blazersedge Night

I left the stories from Blazersedge Night brief last night because of the time. For those who couldn't make it I'd like to share some impressions from the evening.  Click through for the story. 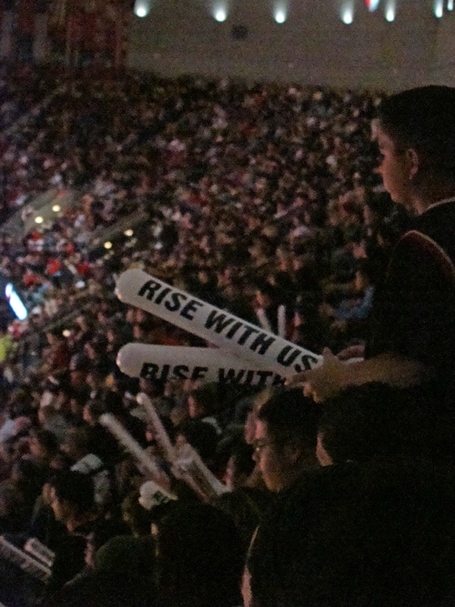 I knew right away upon entering the arena proper that this was going to be a different night.  My dad and I were there early so I could do some TV stuff.  In the time it took us to walk from the courtside media tables to the upper-level seats the B.E. sections were already starting to fill...and this a good 45 minutes before tip-off.  Our group was spread over three sections, right across the middle rows of each.  When you stood at the bottom and looked up you got a panoramic view of faces.  The first clue that this would be something more than previous Blazersedge Nights was the sheer number of kids filing in.  In previous years they'd come in groups of 6 or 8...sometimes up to 20.  Now they were filing up the stairs in groups of 30 or more.  If you're not used to seeing kids in a group nowadays, it's every bit as good as the Rose Parade...and I mean that positively.  The students were arrayed in varied hues.  Some had Blazer colors.  Many of the chaperones had on actual Blazer gear.  The energy, even walking in, was profound.  People were looking around.  The kids' eyes were wide.  They ranged in age from what looked like older pre-teens to full-on teenagers.  Many of them were gaping at the size of the arena, the appearance of the court, the huge scoreboard screen (natch), even the letters and numbers on their actual row which led to their actual seat at an actual Blazer game.   They were a chattering, jumping ball of raw rooting power amping up by the moment.

Even more interesting were the adults.  Being a teacher, principal, counselor, anything working with kids takes energy.  You spend long hours trying to sow seeds that you know you won't see flower fully until they're long beyond you.  You're working on a given Wednesday trying to give a kid something that might come to fruition when they're 24, all the while fearing that they might not make it through next week.  Immediate feedback, especially positive feedback, is rare.  If the kids were amped, the chaperones looked like they, themselves, just walked into Disneyland.  Twenty, thirty, forty, fifty-year olds--first year teachers and administrators with decades under their belts--were beaming.  Seriously, they outshone the big screen.  We stood at the bottom of the section with our pre-game interview media passes still on.  That, plus the Blazer gear, allowed people to identify us readily.  Chaperones floated down the stairs telling stories of how they brought 20, 40, 60 kids...how some of them had never been out of their home towns, how bus rides and stair climbs and logos on the court had transformed these folks into the kids they were always meant to be instead of the too-old-too-quickly semi-adults many of them had been forced to become.  The look in their eyes said the same thing:  This is it!  This is really, really what I've wanted to see from these students.  After sharing stories they'd return with dancing eyes to their kids, who picked up on the excitement even more.  Signs were arranged.  Faces were painted.  Thunder sticks were shared and tested.  And all the while the sections filled more and more and more with young people of every background you could imagine.  The electricity became palpable.

The national anthem was sung by a young woman who looked to be an older teenager.  You got the feeling that some of them were thinking, "That could be me."  She did an amazing job.  The lights dimmed.  The bass thumped.  The court swirled.  The Blazers were introduced and everyone was on their feet going crazy.  Those thunder sticks got a workout!  Kids were jumping, smiling, lost in the moment.  I don't know how much any of them knew about basketball or picks and rolls or true shooting percentages.  They just knew that this was our team...the guys we were here to see.

Then the game started and the Blazers got down 24-8.  I remember thinking, "Oh please...not a blowout.  Not tonight."  But you know what?  When I looked over our sections I saw something funny happening.  Every point the Blazers scored, even if it only took them from 14 to 12 behind, was like they had just gone ahead.  It wasn't every kid.  Some were too cool or too cognizant of the score.  But a number of them were just happy to see those 2 points that got us from 6 to 8.  At that point I knew we were going to be alright.

But then the Blazers started catching up.  A jumper here, a layup there, a steal every once in a while.  You could feel the energy build.  And this time it was all the kids and their chaperones and everyone around them.  They were feeding off of each other and off of the crowd.  You started noticing some of them cheering offensive rebounds or defensive hustle because others in the arena were doing it.  When the Blazers climbed within a half dozen, then tied it, then went ahead the whole thing was at a boil.  It was some crazy, weird mess of thunder and lightning and clapping and dancing.  Nobody was still.  They were all in motion together.

Everyone looked exhausted at halftime but everyone was still buzzed.  Some left for the restroom or to take a walk.  Most stayed and listened to the halftime music.  This was one of the subtle clues that maybe this group was different than most.  Vendors came by frequently, normally a chance for bedlam and grasping among kids.  Very few of these guys bought anything.  Normally you'd see running and chaos amongst so many 10-18 year olds.  I work with many in my church, kids I'd bet my reputation on, but even I wouldn't vouch for them in a pack at a Blazer game with time to kill.  At least there would be some chaos.  But not so much here.  There was playfulness...some banter and silliness, but for the most part they were still drinking it in.  You know what else was odd?  No cel phones.  Or at least very few compared to the deluge you'd normally expect.  No tweeting, no texting, no iPods, no people lost in their own headphones.  All of that was absent.   It looked and sounded and felt great.

Everybody was pumped for the second half.  They had learned from the first two quarters and began to live and die with the flow of the game.  The cheers, the "OHHH!"s...before it had been like electricity but now it was like an ocean wave.  The splashes started down on the court and rolled through the crowd over and past these kids who swelled and ebbed and became almost like a single unit.  You could feel 400+ people going up and down together...people who didn't know each other coming into this night but who were now focused on the same thing, united by a purpose beyond themselves.  When Rudy Fernandez made that fourth-quarter steal and ran the layup drill with Andre Miller you could feel the arena pulse with the chants of "Rud-Y! Rud-Y!"  It was a glorious sound echoing off of the walls up in those 300-section seats.  Even from our side view you could see eyes glittering and fists pumping.   Then the Blazers went up big and they had the crazy-music-dancing timeout where the camera catches people all over the place.  They went all over the arena with it showing many fine dancers.  But then at the end...ohhhhhh...it caught some people in our section in the top row.  As soon as the dancers flashed on the screen the whole group erupted.  That was US!  They showed some of us on the board!  People laughed, high-fived, danced harder.

The game wound down and the Hornets crept closer.  You could feel the tension but at no time did the air or hope leave the vicinity.  Everybody was right there, in the moment.  Nobody looked cynical.  Nobody looked smart or detached.  Everyone was watching to see what would happen.  Everyone was hoping hard.  The next to the last offensive play of the game everyone got on their feet and remained there until the conclusion.  Necks craned, eyes searched, and breaths caught when Bayless' shot went up.  When it missed everybody put their arms down and groaned a little, but about half a second later there was this whole, "Oh well...this was still cool!" vibe going on.  And 450+ people filed in orderly, chatty fashion towards the exits still looking pretty stoked.

As my dad and I waited for a later eastbound MAX one of the Tri-Met operators announced a westbound arrival saying, "Please keep behind the white stripe as the train approaches."  We had heard the same a dozen times already but this time he added, "And please stay with your adults."  We looked up to see what had engendered the unusual postscript and we noticed 30 or so kids getting on the train.  I turned to my dad and said, "Those were probably some of our kids."  Then it struck me that I had called them "our" kids even though I knew none of their names, nor their school, nor where they were going.   But it wasn't inaccurate.  At least for a night, they were...not just because we provided them tickets like they were our own but because for those three hours they were Blazer fans cheering as loud and long as anybody in that arena.  That made us part of the larger Blazer family.  We'd go home to different places and wake up to different lives tomorrow but in some way--even just a small one like this--that didn't matter.  We had a connection.  We were fans and friends.  And that's what it's all about.

Heartfelt thanks again to everyone who made this possible, people who for the cost of 5 or 10 or 22 or 100 dollars made other people's eyes shine as if they had won the lottery.   It didn't happen because of corporate sponsorship or some guy writing a huge check.  It happened because of individuals and offices and small businesses and little online sites who worked together, each chipping in a little to make this possible.

Thank you also to every student, every teacher, every administrator and social worker and parent who took the time to come last night.  You made this night special for us all.  Sorry the team couldn't win for you but you won that game for all of us.  You reminded us what it means to be a fan.

450 kids, one irreplaceable night...thank you all.

P.S. I've included the wide-crowd picture at the top of this post where the only faces are angled away from us.  One of the things people will ask is why we don't have more pictures.  We'd love to post more of them.   I'd love for you to see every smile and cheer.   I think many of the people there would love to have them posted.  But with students privacy is a concern.  We don't want to go blasting someone's picture across the internet unless we're sure that they, their family, their friends, and their teachers are cool with that.  Obviously with over 400 attendees that's impossible from a logistics standpoint.  So rather than err on the side of exposure we choose to go the other route.  For those who contributed I hope these words, plus the letters we'll no doubt receive and share in the coming days, will suffice to give you a picture of the evening.

P.P.S.  Here's a first-hand story from the fanposts.