To listen go here and select the MSP Hour 3.  The segment starts at the 4 minute mark and runs roughly 10 minutes.

As discussed last night and this morning on the radio, continuing to start Jeff Pendergraph was an untenable position for Nate McMillan. McMillan said today that he would go back to starting Juwan Howard at the five spot and explained...

[Starting Pendergraph] was a decision I made because of that back to back game, they played a ton of minutes. I wanted to split both Howard and LaMarcus up because I knew I had to play Dante and Jeff. We've gotten off that road trip now and Bayless is healthy so I'm going back to Howard.

McMillan also said Jerryd Bayless will return to the starting lineup tomorrow night as he is healthy.

Bayless was the last guy on the court today, shooting jumper after jumper. While there has been some criticism that the ball was in his hands for the potential game winner last night, I firmly believe that was the right call in that time/score situation.  With less than four seconds and down one, you want the ball in the hands of the player who can 1) create his own shot 2) can get into the paint and potentially draw contact and 3) has the confidence and the ability to hit a shot with the game on the line.  Bayless has all of those things except, it turned out, the ability to hit the shot.  He certainly wasn't lacking for confidence before he took the shot or today when he had a night to think back on it.

I asked Bayless what was going through his head when McMillan drew up the final play for him.  Remember, Bayless was not even in the rotation as recently as a few months ago and barely played in the fourth quarter last night.  Here's Bayless's response, which I thought was telling...

Despite his surprise, was Bayless happy his coach put the game in his hands?

Yeah, I was happy. I definitely want the ball in that situation. Especially if Brandon is out. If Brandon is out and they need a guy to go in there and try to make a bucket, I'm glad he gave me the opportunity and hopefully the next one can go down.

Bayless also had this to say in response to a question from Casey Holdahl if he treated last night's game like any other game or if that one stung a bit worse than most...

It obviously hurts that I missed the shot. Michael Jordan has missed a couple game winners in his life so whatever, move on to the next game against Utah.

Invoking Michael Jordan?  Like I said, not lacking for confidence...

Nate McMillan didn't go into a ton of detail with regard to his team's faltering fourth quarter execution last night.  Here's what he did say...

We give the ball to the guys who can create opportunities. Miller was a guy who has been able to do that for us. We played off of him. It didn't work last night... we went to LaMarcus, we went to Howard, we went to our pick and roll sets, we had open looks and we have to knock the shots down. We can't do much more than that.

Nate McMillan informed the media that NIcolas Batum is being held out of contract drills and scrimmages during practices so that he can play in games.  Batum confirmed that with a smile and a tilt of his head.  He also said tentatively that he expects to play 10 or 15 minutes tomorrow night.  Finally, he said his shoulder remains pain free.

Joel Przybilla in the Building

Joel Przybilla showed up at the Practice Facility and took questions from the media for the first time since his knee injury in December.  He sported this monstrous knee brace. 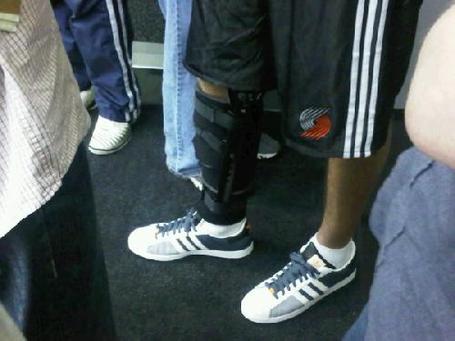 Przybilla was relaxed and quick-witted, cracking jokes and making fun of himself for not being able to drive a car and needing to be chauffeured around by his pregnant wife.  As for his medical progress, Przybilla said, "the rough part is over with now. I'm just going through rehab now. Each day it's getting better. But slowly." As for what kind of activities he was allowed to do, Przybilla said simply, "Not much."  He did express total confidence that he would make a full recovery.

Joe Freeman has much more on Przybilla here.

If you've been living under a rock, early this morning WorldStarHipHop.com released what they presented as naked photographs of Greg Oden. It took about five hours after my prediction, but lawyers have intervened on behalf of Greg Oden. It's very interesting to note that the lawyers sending out cease-and-desist notices are from Oden's management company and not from the Portland Trail Blazers.

In case you were wondering, there were no members of upper management present at practice today (Tom Penn did briefly pop his head out but popped back into hiding very quickly) and Nate McMillan was not asked about the pictures during his group media interview.   There were, however, plenty of chuckles about the pictures in the gym. To my knowledge, no effort was made by anyone present, either directly or indirectly, to deny the authenticity of the pictures.

Adrian Wojnarowski weighed in with an interesting take that is sure to get some people's blood going...

How many different ways can you pick the wrong player in a draft? The Blazers are testing those limits with Greg Oden now.

After so much talk in recent years about the team's culture and the prominent role that Greg Oden plays in the community, it will be interesting to see how (if?) the Blazers management handles this.  What a nightmare for all involved. How do you spin this if you're KP?  Present Oden as the victim? Call it an invasion of privacy? Chalk it up to naivete?  Let Oden deal with it by himself?  You've got to back your player here, right?

As for the players themselves, at least one media member had hoped they would practice without shorts today as a show of solidarity for their teammate.  That did not happen. That was definitely for the best.