The second-round pick from Arizona State has an impingement in his left hip, a mechanical disorder that in Pendergraph's case, is congenital. Wednesday's surgery will be in Vail, Colo.

Pendergraph has not signed a contract with the Blazers, but general manager Kevin Pritchard on Saturday said a deal was imminent. Indications are that the injury and subsequent surgery will not discourage the team from signing the power forward.

The Portland Trail Blazers have confirmed to Blazersedge that Jeff Pendergraph has injured his left hip and will undergo surgery this Wednesday.  A timetable for recovery will not be known until after the surgery.

Pendergraph has not yet been signed by the team. With 12 players already under contract, Pendergraph was slated to be the 13th, and possibly final, roster addition.  It's unclear how or if this injury will affect his future with the team.

While the team signed its other 2nd round draft pick Dante Cunningham last month and maintained until recently that Pendergraph would be similarly signed going into training camp, news came out at the end of last week that the Blazers were auditioning veteran power forwards Juwan Howard and Stromile Swift.

Although Pendergraph is active and physical, he does not possess elite athleticism or refined offensive skills, and in the midst of a successful Summer League, Blazers scout Chad Buchanan questioned whether Pendergraph could handle NBA 4s and 5s on the defensive end.

For the Blazers, who appear to be in "win now" mode, going with a veteran 4 as injury insurance for LaMarcus Aldridge might be the smart play in the short term.

The last three or four months have certainly been a rollercoaster for Pendergraph.  From being completely off many scouts' radars, to being drafted by a former college teammate's father (Nate McMillan), to having a successful Summer League and expecting a contract, and now to the operating table. Here's hoping Pendergraph, whose smile and energy lit up pre-draft workouts earlier this summer, eventually finds his way to the Portland bench.

We've heard from a reliable source that power forward Jeff Pendergraph, the 31st pick in the 2009 NBA Draft, will have hip surgery this week and is expected to be out for the majority of the 2009-10 season. Pendergraph is said to have injured his hip participating in NBA assistant coach Tim Grgurich's summer camp in Las Vegas this past August. The Blazers have neither confirmed nor denied this story. The team has yet to sign Pendergraph to a rookie contract. 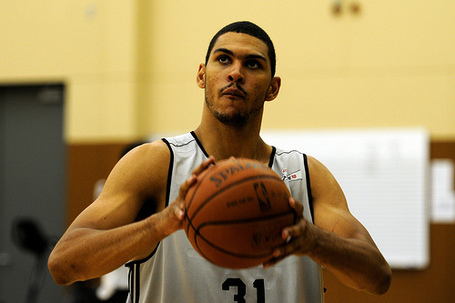 This would make Pendergraph the second Blazer drafted in 2009 -- along with Australian Patty Mills -- to be injured prior to signing a contract with the team.

The timing of this report is curious given last week's report that the Blazers were working out veteran Power Forwards Juwan Howard and Stromile Swift.

More details and confirmation from the team as they become available.

Picture via Alex McDougall for BE.