For whatever reason, seeing the guys together in one place in basketball gear is a completely different animal from reading their names on a roster sheet or going through Media Day interviews one by one.

In one corner, you see Nic Batum, Travis Outlaw and Martell Webster.  At another basket, it's All Star Brandon Roy.  Across the way it's LaMarcus Aldridge and Juwan Howard. Of course you can't miss Greg Oden or Joel Przybilla.  Over there talking to Gary Payton?  Oh that's Jerryd Bayless. Who's that with the Honey Buns on his head? Andre Miller! Right, nice pickup.  Not to mention Steve Blake calmly shooting his free throws or Dante Cunningham bouncing around the building. Or Jarron Collins lecturing about nuclear physics (kidding). Or Ime Udoka trying to lock up international star Rudy Fernandez during drills.

The last time we've seen NBA bodies at the Practice Facility was during pre-draft workouts.  For whatever reason, the full assemblage of Blazers was more impressive than Wayne Ellington and Danny Green.  Is jaw-dropping going too far? Probably.  But it's a tempting word to throw out there.  I can see why Kevin Pritchard, Nate McMillan and the others who have watched scrimmages are so confident entering the season.

This team isn't just loaded on paper.  They are loaded.

Just take a look for yourself. 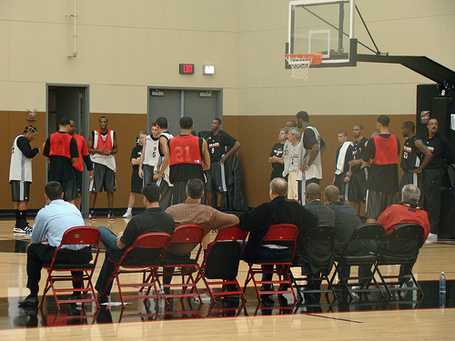 Here's a full-size version. Pan slowly left to right and tell me you're not impressed.

Granted, we were only able to see about 20 minutes of action today.  The guys were working through team defense concepts: closing out on shooters, recovering against drivers and securing defensive rebounds.  Jason Quick chided Nate McMillan for so obviously staging the defensive work during the open media session.  McMillan laughed it off but the call out was accurate: Nate is trying to send a message early and loudly that playing time will be divvied up, in part, by defensive effort and success.  As it should be.  The guys responded by really overdoing the team talking on defense.  It was a veritable cacophony as the ball swung around the perimeter.  I guess that's day one for you.

After practice broke, I caught up a little bit with Brandon and Nate.  Here's what they had to say.

I hate to do this because SB Nation recently informed me that I've exceeded our annual site allotment of praise for a single player. But Brandon Roy went and did it again.  While shooting cool down jumpers I heard Brandon mention to one of the assistant coaches that he was looking to "repeat my award."

What award would that be? All Star? All-NBA? Wrong and wrong.  He was talking about his Magic Johnson Award, given out by the Pro Basketball Writers Association, according to Jason Quick, to "recognize the player who best combines excellence on the court with cooperation with the media and fans."

Only Brandon Roy would set this as a preseason goal.  Was a full campaign in the works?

I'm trying to repeat. I'm going for the award again. I'm not going to start a campaign too early because it's a long season but I'm trying to win it back to back. I asked them if anybody has done that before and they said no.

So is the current award prominently displayed on your fireplace mantle?

They haven't given me my award yet. They're going to give it to me on the first preseason game. [Once I get it], I'll set that up nice.

Keep in mind he was joking about running a campaign for this thing.  But he was dead serious about wanting to win it again.

Did I ever expect a top 10 player in the NBA to be citing pace-adjusted statistics off the top of his head during the first day of training camp?  No, I didn't.  Neither did Kevin Pelton. And now he needs a new pair of pants thanks to this quote from Brandon to Joe Freeman regarding the team's need to improve its defense.

We went over the numbers. We didn't get a lot of stops but we didn't play fast so our numbers are a little up and down. We were like 4th in the league in points allowed but since we didn't get a lot of stops, our defensive rebounding looks bad. A lot of our numbers are [bad]. We have to get better at holding teams to a lower field goal percentage. Period. That's the only number we should care about. We have to get that field goal percentage down. That's what we're working on.

Does John Hollinger smoke a cigar while reading that or what?  It's one thing to have Kevin Pritchard or Stan Van Gundy shouting you out. It's quite another to have Brandon Roy mulling your principles.  How much of his new $80 million dollar salary do you think Brandon would be willing to donate to fans in need of an ESPN Insider subscription?

Advanced stats talk aside, Brandon took up the discussion of defense on a number of fronts.  First, I asked him whether what they worked on today was "man," "zone," or something else.

It's a man defense but it's that we're so tight and we're helping so much it appears that it's a zone just to throw the opponent off.

Would running more zone help protect you on the defensive end?

I think a little bit but my thing is this year I'm trying to get better defensively. My focus throughout this whole preseason is getting better defensively. I told coach during the preseason, I know we've got Nic but let me guard 2s. I'm trying to build that. When it comes down to playoff time if it's the Lakers, they've got Kobe and Artest, I'm going to have to guard so I want to build on that.

Yeah, my body feels good. I feel light. I feel like I can stay in front of 1s, 2s and 3s. But there's Chris Paul and those guys out there, I don't know if I want to burn down too much energy chasing those guys around. [laughs] I feel comfortable guarding them for possessions if I have to.

We heard yesterday from Dante about Brandon. Here's Brandon about Dante...

He's active. I didn't know he was that bouncy. We were doing some drills, running and jumping.  Some good speed. We'll slow things down a little bit more and I'll be able to get a better read on him. He can play the 3 or the 4, that's the exciting thing about him.  We've got a lot of versatile guys and he's one of them.

With an older, smarter, deeper roster an obvious question facing Nate McMillan this season is whether or not to bring back more zone looks than he showed last year.  If the Blazers went zone last year, it was primarily with the Spanish Connection on the court along with the other second unit guys.  I asked Nate if we should expect more or less zone this year.

Zone is a part of our package. We like that. We like having the change, being able to show a team something different. We're going to play zone.

I thought two years ago we played more zone than we did last year. I thought we would play more zone last year than we did. Our man became a better defense and zone became more of a disruptive defense. It's part of our package and we're going to continue to use it in different situations.

That's been the team that we've used the zone with. The second unit. They're smaller, a little bit more active at the guards, last year with Sergio and Rudy.

Brandon and Nicolas are a better man team than a zone team.

Wait a minute: did he just tip us off that Nic will continue starting alongside Brandon Roy?  Or maybe he was just talking about last year... maybe.

I asked Nate for his thoughts on my reaction to the coaches and management Media Day.  Specifically, does he have any concerns entering the season?  His answer: living up to expectations. 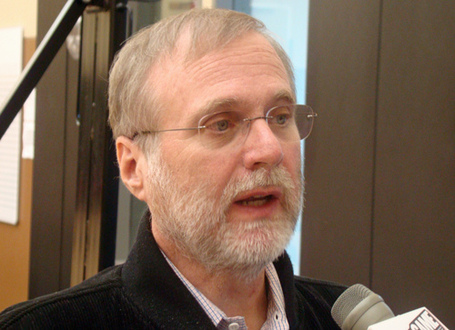 Joe Freeman has a nice transcript of Paul Allen's comments.  Not sure he said all that much but any time Allen addresses the media it's at least somewhat newsworthy.  You can see above that Allen is still sporting his beard.

Update: Contrary to the previous paragraph, it looks like Mr. Allen did say something quite significant to John Canzano: he recently had heart surgery.

Other Celebrities and Odds & Ends

The star power in the building was a little bit overwhelming today.  Not only was the entire brain trust there but Hersey Hawkins, Gary Payton, Harry Glickman and OSU Basketball Coach Craig Robinson were all in attendance too.

Despite Payton's best efforts (antics), Coach Robinson drew the most media attention.  He told a small group of reporters that it's still shocking to answer the phone and hear "Air Force One is on the line."   Robinson, of course, is the brother of the First Lady, Michelle Obama.  Robinson also rhetorically asked a small group of media members, "Do you have a sister? Imagine if she was the 1st lady! It's a weird feeling. WEIRD. I'm still not used to it." I can see how that might end up being weird.

If you're looking for more on Robinson, check out Ryan White's interview with him on Livewire.

Seeing Coach Robinson reminded me of this old interview we did with Robinson here on Blazersedge.  it was one of the first interviews he did after accepting the job at Oregon State if I recall.  Man, that feels like a long time ago.

McMillan said "the honeymoon's been over for a while," when referring to high expectations for the team. McMillan added that, while everything looks good on paper, nothing real has happened yet.

You know how I roll.  Got a bunch of pictures of the guys' sneakers. Really like Batum's.  Martell's too. Here's the full-size slideshow with details.

And here's a link to more great pictures of things other than feet from Casey Holdahl.

Finally, I can't tell you how invigorating it is to be back in the gym after what felt like a tremendously long offseason.  I hope you've enjoyed the first 24 hours back. I know I have. I have some leftover thoughts from Media Day that will go up tomorrow morning. Until then...