Share All sharing options for: Fan Review Of Blazers Flex Pricing: "It Sends an Unsettling Message"

As I wrote last week, the Press Release from the Blazers announcing their new "Flexible Pricing" program was littered with enough biz-talk mumbo-jumbo to send Blazers Chief Marketing Officer Sarah Mensah into the Corporate Euphemisms Hall Of Fame on the first ballot.

The bottom line with Flex Pricing: the Blazers are flexibly scalping their own tickets in the name of maximizing profit.  I'm not saying that's a good thing and I'm not saying that's a bad thing. I'm just calling it what it is rather than hiding behind phrases like, "we anticipate prices closer in alignment with market demand."

Ultimately, Flex Pricing's verdict will come from market forces: as long as demand stays high, prices will stay high.  Thanks to the team's current success and its status as the only truly professional sports team in town, demand and prices will almost surely stay high.

But what does that mean for the average fan? 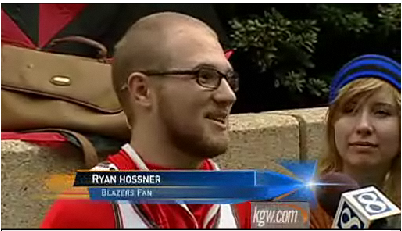 For that I turn to Blazersedge reader Ryan aka Hossticles, pictured above.  Ryan achieved local fame this week by being the very first fan to line up for single game tickets outside the Rose Garden box office, more than 15 hours before tickets went on sale.

Flex pricing charges more money for 'elite' teams. Portland plays well at home. They play well at home because they seat hundreds of everyday people - all in this economy together, some in between jobs with no resolution in sight - who are looking for something to cheer for. If these diehards are priced out, it sends an unsettling message to the base. I know there are bottom lines to meet, but I wish my $9 three times over for as many games meant as much to the team as $22 for the only one I could afford.

Please click through to read the full story of his (mis)adventures.

If any of you have personal stories about your encounters with Flex Pricing, please do not hesitate to hit my email.

For the second year in a row, my old high school friend Kaitlin and I were first in line for single game Blazer tickets. It was a blast, to be sure, and I'm excited to have been able to purchase the tickets I did (one for me and one for the gf, for Opening Night), especially considering my dire financial situation (thanks, college degree!). However there were some major differences between this year and last, and they weren't all positive. Without getting too detailed, here is a breakdown of what happened in these two big campouts.

Last year training camp "proper" was winding down when single game tickets were released. Tickets went on sale on a Tuesday, so Kaitlin and I camped out starting at NOON Monday. This turned out to be way overkill; the next person in line showed up at 7 AM (I actually was recognized by the Biology faculty at my school with the "I've got my priorities" award based on my skipping two days of lectures and labs). But being there early, on a workday no less, had its advantages. Mr. Larry Miller and Mr. Kevin Pritchard came out and shook our hands and thanked us for being there; we were interviewed by KPTV, KGW, KATU, 95.5, and Casey at blazers.com (and had a writeup by BE's Sarbonis); the front office sent out goodie bags with stickers, hats, shirts, and an umbrella. The team even provided us dinner and made special allowance for us to sleep inside the box office overnight. We even got our faces slapped on a Jones Soda bottle, sold exclusively at the Rose Garden. To top it off, we were awakened by coffee, doughnuts, and complimentary tickets to the preseason opener against the Kings (oh yeah -- AND I got in UniWatch the next day for noticing an upside down number 2 on Donte Greene's jersey). All in all it was one of the greatest days as a Blazer fan in my entire life, and that memory fed my hunger to be back this year.

If only things had gone so smoothly this time around!

This year I planned to have more people aboard - joining Kaitlin and I would be our own Bonnieln, Sarbonis, Nateinaloha, and Roodieephirnandizz! All of those other people have jobs, school, lives, or some combination of the above, though, so most stopped by to wish us well before heading off for regular sleeping hours. That was fine by me - more goodies, right? We waited until later this year, arriving on the grounds around 8 PM. We were still first in line, and plenty early enough to ridicule the Jason Mraz concert-goers. We had a third in line join us around 10 PM, which validated our early-bird sentiment. But then things started to turn.. weird. Security came by and asked us to vacate around midnight. I understand the no-squatting rule, but it was still a bummer - especially after the red carpet last year! So we left and crashed at Bonnieln's place in town. We got back to the Rose Garden at 6 AM and reclaimed our spot at the front of the line, moving inside for warmth. The mood was decidedly different, though, something we only started to realize after team employees started arriving.

Again, they were incredible last year, going WAY above and beyond. This year was so sad - many employees came in and, on their way to their cubes in the ticket office, ask what we were camped out for! Then security asked us to wait outside. Suddenly it felt as though we were a burden, no longer the source of cool free publicity.

The hardest hit came once the box office finally opened, as the flex pricing caught everyone by surprise. The model was well understood, but the amount was staggering - my opening night tickets, in the very last row, were 150% MORE than base price ($22 instead of $9). That is a big jump. I talked with some other folks in line; Laker game seats were going for $35 in the Tan section. Nearly 4x base price!

All of the things that seemed negative today can be easily explained in their own separate way. No big-wig attention? It was a Sunday evening, and we'd done it before. No sleeping over? Security is doing their job. Having to wait outside? The players rolled through that foyer on their way to Rebound for physicals; it must have been a safety concern. Flex pricing? Meeting market demand, curbing scalped tickets, encouraging package purchases.

But viewed as a sum of many parts, it felt as though the team didn't want us there. The cheapest season ticket packages run a few hundred dollars per seat; here we were buying tickets to one, two, or three games and dropping nearly as much! The team employees didn't care, and outside of Martell, Joel, and Steve, the players seemed irked that there were people outside. Put it all together and it started to smell funny. Just a real stinker of a morning.

I could try and make a big, dramatic statement here, but instead I'll close with this. Flex pricing charges more money for 'elite' teams. Portland plays well at home. They play well at home because they seat hundreds of everyday people - all in this economy together, some in between jobs with no resolution in sight - who are looking for something to cheer for. If these diehards are priced out, it sends an unsettling message to the base. I know there are bottom lines to meet, but I wish my $9 three times over for as many games meant as much to the team as $22 for the only one I could afford.

Many thanks to Ryan for his thorough report.