Dante Cunningham: From Andrews Air Force Base to the NBA

Share All sharing options for: Dante Cunningham: From Andrews Air Force Base to the NBA

I'm not sure how we missed this during the aftermath of this year's draft, but Dante Cunningham and Denver Nuggets' point guard Ty Lawson have been friends dating all the way back to their elementary school playing days on Andrews Air Force Base.

DETROIT -- When George Lawson and Ron Cunningham, who served for a combined 52 years on Maryland's Andrews Air Force Base, spoke on the phone this week, Cunningham said it was about "the dream coming to fruition." Both men were planning to travel to the Final Four, and were understandably feeling nostalgic. Lawson, a former Tech Sergeant, had dug up a 1995 photo of the basketball team he and Cunningham, a former Chief Master Sergeant, had joined forces to coach at the base's youth center. The team was called the Andrews Magic (inspired by the Shaq-and-Penny powerhouse in Orlando at the time), and their sons were 7 years old in the picture. In the back row, wearing No. 52, is Dante Cunningham, with his eyebrows raised; kneeling at the center, wearing No. 11, is Ty Lawson, over-grinning to the point that his eyes are nearly shut. Every player's jersey is neatly tucked in.

I asked Dante on Monday what it felt like to have achieved a life-long goal -- to make the NBA -- at the same time as one of his best friends from childhood achieved the same goal. Unprompted, Dante brought up the same picture.

[Ty Lawson's father] was my first head coach. When I was like six maybe. There's a picture that popped up, it surfaced during the NCAA tournament when we played North Carolina. A picture of me and [Ty] with a high top fade. He had a big grin on his face and I think I was doing something crazy. It's a good picture. 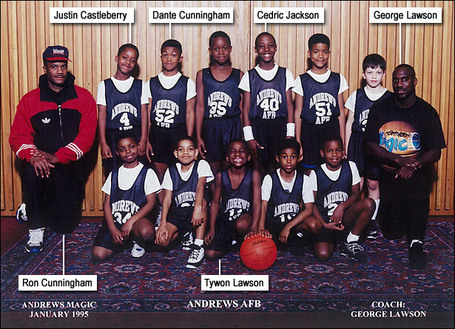 Looking back at that picture now, I asked Dante, must really make you stop and think.

It's crazy. We were actually looking at one of a "Bouncing Down Memory Lane" from when we played on the Andrews team. It was cool you don't see that. Two guys from the same youth team coming up to two different colleges, two different routes. You rarely see two guys do that. It's definitely a blessing and something we both cherish.

Two different routes indeed.  Lawson won a national title at the University of North Carolina after declaring early and then withdrawing from the 2008 NBA draft. He eventually was selected in the first round this year.

Dante was off the radar for nearly his entire college career at Villanova but had a great pre-draft process and found himself picked early in the second round.  Although the Blazers seemed smitten on draft night, he would have to traverse the Las Vegas Summer League circuit before signing his first contract.  Dante played well in Vegas but didn't stand out off the court. He answered questions directly but briefly and generally conducted himself like he was on an extended job interview.

When you signed it, you seen the contract, you seen everything on it, you're like 'hey, you're here now, now it's time for the next step, you gotta continue to stay hungry.'

Saying that his attitude yesterday was light and day from Summer League would be going too far.  But he definitely had a different vibe going: serene, confident, open, happy.  Compared to last year's true rookies -- Bayless and Batum -- who dealt with the media crush by overcompensating and wallflowering, respectively, Dante came across like a seasoned pro comfortable in his own skin.  Of course, Dante is older than both Bayless and Batum -- thanks to his four years in college -- and he attributed his confidence in front of the media crowds to his experience and age.

Honestly I think it goes to the four years of college. That whole training preparation. Sitting here with the [media] guys, you do this all the time at the NCAA tournament. It's something I'm pretty much used to. Sitting up [in my chair]. Being clear [when I speak].

As noted above, Dante was raised in a military family and, as you might have guessed from this vignette posted earlier, the Cunningham clique is a tight-knit group learning to let go of their NBA son.  Upon hearing the news that he had finally signed his NBA contract, his parents framed the moment as a time for independence.

They congratulated me. They said we are proud but they pushed me on off. You're gone now. You're grown. You're doing your own thing. Have fun.

They didn't push him on off too far, though.  Asked if he had circled a date or two on the team's schedule for when he would be playing in front of his family, Cunningham couldn't stop.

My two favorite games by far are the Sixers game and the Washington game.

Then we have Charlotte, my parents can get to that one.  Boston, New York.

Everything up and down the East Coast I know my parents will definitely be there.

Some guys in the NBA like to act hard.  After watching him smile openly while gushing that his parents would be making their own East Coast road trip to catch his games, it became clear, if it wasn't already, that Dante is not one of those guys.
Thanks to their similar builds and their tweener 3/4 status, Dante will probably endure a year or two of comparisons to Travis Outlaw.  You know it, Dante knows it.  Showing a veteran's wit, he drew laughs with his spot-on descriptions and uncanny analysis of Outlaw's game.

His length is unbelievable. He's long, it feels like he gets his go-go-gadget arm out there and gets the ball. I like his jump shot, he shoots the ball very well, you need to put a hand in his face.
He likes the dribble jump shot, he also likes the dribble, a little hesitation, and come across the lane and throw up a little one-leg leaner on you. He's been hitting it.

Whether it was facing the cameras or breaking down Outlaw's tendencies, Dante screams "ahead-of-the-curve" when it comes to quote unquote Basketball Intelligence.  But like any rookie, he's obviously got a lot to learn.  Entering his first day of training camp Tuesday he refused to cop to any nerves.

I wouldn't say I'm nervous at all. I would say I'm excited. At this point, basketball is just going to be basketball. Faster, stronger, a lot better.

I would never say I'm nervous.

Nerves come from being unprepared.  Dante Cunningham -- everything about him -- seems prepared.

And thanks to some scrimmages he's more than prepared -- he's been initiated... by Greg Oden.

Joe Freeman: Be honest, has Greg dunked on you?

Inevitable posterizations aside, from the look and sound of things on Monday the rook is doing just fine.