Going back through nearly two hours of tape today it's clear that one man stole the show. That man is Travis Outlaw. 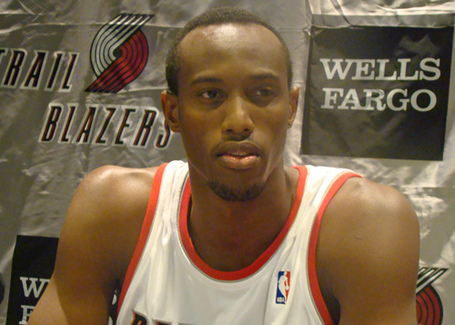 I started typing up the quotable portions of Travis's interview tonight and quickly realized the entire thing was quotable.  The following might make you laugh, it might make you cry, it might cause you to scratch your head.

The questions are paraphrased and in bold; Travis's answers are in grey blockquote.  My favorite quotes are underlined.

Here's the audio link if you want to stream/download the mp3: Travis Outlaw Media Day

Your hair is longer.

Juss forgot to cut it... Trying to look my age.

How are you looking at your situation coming into the season?

What's your role on the team?

Pretty much think the same thing. Being the spark off the bench. Whatever he needs. Just be the guy.

Are you in the running for the starting small forward job?

How glad are you that you're still here?

Is this the best roster since you've been on the Blazers?

What are your personal expectations?

You've had some slow starts in the past.

It's a long season. It's 82 strong. Preseason I feel like that's when you're trying to find your thing. By the time the season starts I feel like I'm ready.

Did you work harder this summer than previous summers?

Last year I worked hard but I came down with a Staph infection, so I had to sit out for 3 weeks. This year I didn't catch no Staph infection so I was able to work out full.

Are you more prepared coming into this season?

I'm kind of nervous. I've been working on a lot of new things. It's kind of like I really need to try them against players of my caliber to see if they still work. That's what I'm kinda hoping to see. I added more than my 1 dribble pull-up. I got a 1 dribble, 2 dribbles, you know 3 dribbles, pass.

How about the defensive end?

Are you comfortable playing the four?

How do you feel having Martell back?

I support him. Last year I wanted him to come back just as much. He's a great asset to this team. He's a knockdown 3 point shooter. Imagine just seeing him this summer, working hard. I'm really looking forward to seeing him on the court.