Another View of Brandon Roy

Share All sharing options for: Another View of Brandon Roy

My favorite exchange from Media Day this afternoon came from one of the other Blazers rookies, Dante Cunningham. 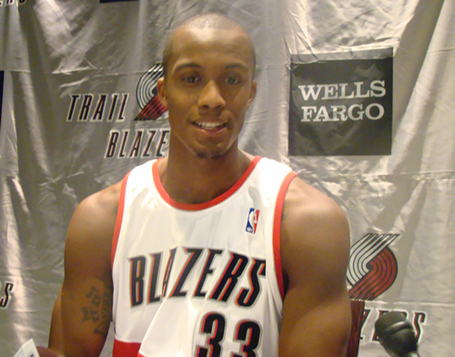 Over the course of this summer, I've written a lot about what's next for Brandon Roy, in terms of improving his game and taking the next steps to becoming a truly elite NBA player.  Although it's good to look ahead I certainly don't mean to look past what Brandon has already become.  Media Day is a great reminder of this: not only are the crowds the largest and most eager for Brandon, his charisma just radiates in a way nobody else on the team can hope to match.

It's the superstar thing. He's got it.

Watching the room empty out a little bit as some of the rookies came out, it struck me: Brandon Roy is by far the best player and biggest star these guys have ever played with.  Walking into a gym and choosing up sides during off-season pick-up games with a player of Brandon Roy's stature seems like it would be intimidating.

Dante was one of many Blazers to show up early at the Practice Facility and participate in scrimmages this year.  I asked him to size up Brandon's game, which he has been experiencing up close and personal for the first time.  Dante was, not surprisingly, impressed...

His speed is different. It's not necessarily a blinding speed.

[And] it's not necessarily just strong and moving everybody out of the way.

He's just so fundamentally sound in how he gets around you and how he moves his body. It's amazing to watch.

Game aside, it's clear Roy quickly left a much bigger impression on Dante.

For somebody that just signed the contract that he signed, he's very humble. I love that about him. He's not all 'I'm the King,' he's very 'hey, how you doin'?' He's very approachable.

I remember the first time I met him I came out on the plane. Me and my father walked in the gym and he was in the middle of his workout. He stopped his workout, came over and shook me and my mother's hand and said, 'hey, come with me tomorrow and work out.' He offered immediately for me to work out with him.

That was tremendous right there.

I asked Dante what that exchange meant to him, now that he's had a few weeks to digest it.

That's a player, that's a team player. That's somebody that I want to go to battle with.

Today, Cunningham also joked about having his shot rejected repeatedly by Greg Oden. But I got the sense from the awe in his voice that this meetup in an empty gym -- no cameras around to capture it, just a quiet respect between two players -- was Dante's true "Welcome to the NBA" moment.

Could you ask for a better one?