Share All sharing options for: Your Newest Blazer: Juwan Howard 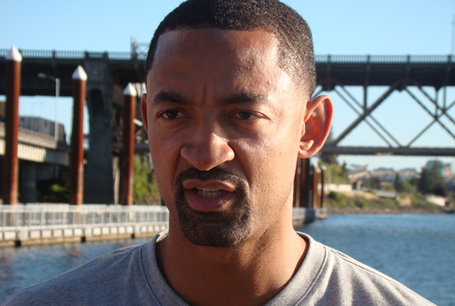 Newly-inked Blazer Juwan Howard addresses the media on the east bank of the Willamette River.

Juwan Howard has lived to tell about the pressures and pitfalls of being a basketball player under the most intense microscope imaginable.  Did he fail to truly "pan out"?  Was he grossly overpaid over the course of his career? Is he past his prime? Is he unlikely to see many minutes on this club?  Yes, Yes, Yes, Yes.

Was this still a move worth making?  Sure, why not.

From a financial standpoint the Blazers are taking next-to-no risk and have limited their commitment to a single season.  Compared to the other names that have been floated -- Jarron Collins, Greg Ostertag, Melvin Ely -- he certainly has the most juice. The only real decision to make, in my mind, was whether to take Howard or to leave the roster spot open.  If that's your choice, doesn't the question really become, "Is he better than nothing?"

Five black men wearing their shorts past their knees, getting in each other's faces, brash as can be, not really caring what you thought of them.  They heard it all. They went through a lot.

Howard is the last player standing from that group.  This guy has been around so long he was in Hoop Dreams. And that's no punchline. He really was in Hoop Dreams as a high schooler, smiling and laughing and chowing down on a slice of pizza if I'm remembering correctly.

Today the same smile and laughter was evident as he effortlessly alternated between questions from the media about why he chose Portland and questions about the prices of various luxury automobiles from former players Chris Dudley and Jerome Kersey.

Decked head-to-toe in grey Jordan Brand gear, Howard seemed completely comfortable in an inherently uncomfortable setting: he was standing on a rocking boat dock that had just been dedicated to recently-deceased former Blazer Kevin Duckworth.  With lanyards that bore the tagline "The Kevin J. Duckworth Memorial Dock was dedicated in loving memory on September 17, 2009" being handed out and big shots like Larry Miller and Dan Saltzman standing nearby, Howard was unfazed.  It reminded me, in a way, of when Andre Miller was booed by the campers at Nate McMillan's basketball camp prior to his signing press conference.  Miller took that in stride. Howard took today -- memories of a fellow Chicago big man, the whirlwind of joining a new team, even the slow, steady side-to-side shaking of the dock -- in stride.

Sure his range is nice and he claims that he can still make a difference for this club.  But it's Howard's poise and perspective that led the Blazers to sign him.  Put a guy like the Greg Oden we saw last March in the situation that Howard faced today and I cringe thinking about how he would have (mis)handled it.

But give Juwan Howard a season with him and maybe things will be different. That's better than nothing in my book.

Click through for some of Juwan's quotes and pictures from Duck's Dock!

Why did you choose Portland?

Give a lot of praise to the organization. They've got talented young ballplayers that they are molding into a championship calibre team. That's the reason I chose Portland. All those intangibles.

What do you bring to this team?

I played in over 1,000 games. I've played in playoff games. I still have a lot left in the tank. I can help the teams on the court and off the court. I feel [the players] will respect me if I pull them aside. That's what it's all about, helping the team.

What are your initial thoughts on your new team?

This team has a chance to do something special. They got a taste last year and I think they're hungry to go back at the start of this season at training camp. To go out there and compete at a high level. It all comes down to summer time, working on your game, spending the hours and hours trying to fine tune your game. Working on your weaknesses. Being in shape. Holding yourself accountable so when it comes time for training camp everybody is on the same page.  I played with the guys today. A lot of guys are in shape, worked out pretty hard before we started playing pickup. It's good to see guys working hard and excited about the season coming up.

Really it's his second season. He missed that season last year it was more like his rookie year. He's taken a lot of heat. A lot of criticism. The guy has so many more years to play in this league. We haven't seen his best, he's scratching at the surface, getting ready to be one of the best centers in this league. He has the potential and more importantly the attitude and the work ethic, he wants to get better. The sky's the limit of a player of his calibre.

They play high energy for 48 minutes. He's a defensive-oriented type of coach. He believes in getting stops, that defense wins games for you. He'll run 9 or 10 man rotation at you occassionally. I'm looking forward to learning more under Nate. I'm a young guy still who's willing to learn. I haven't gotten too old to where I think I know everything or you can't teach me any new stuff. If I had the attitude of where I thought I know too much, I would walk away from the game. Right now I'm not ready to do that.

Are you feeling good health-wise?

What's your goal with this team?

This team is on the verge of doing something special this season. Expectations. There's high expectations coming from the fans and the media because they went to the playoffs last year. I know that the number one goal of everyone is to win a championship. We gonna take one game at a time, work our tails off in training camp, prepare ourselves, and work hard like a championship calibre team and hopefully we'll get good results.

Who else pursued you?

Charlotte was a team I was interested in going back to. Cleveland, I talked to Cleveland. Atlanta. Atlanta had some interest. 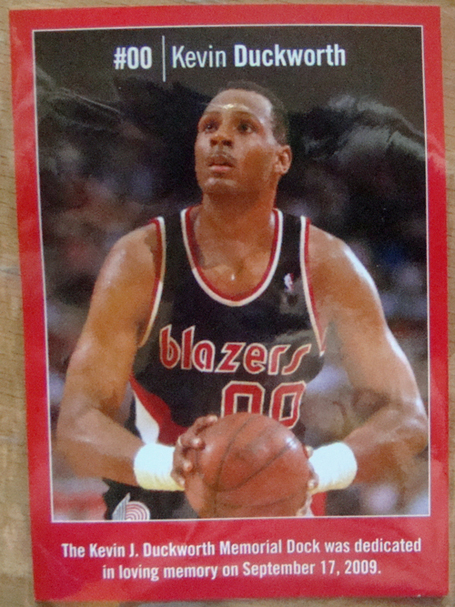