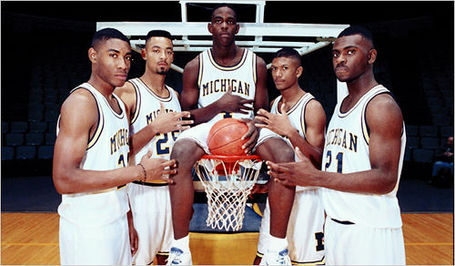 "I think he can still play," general manager Kevin Pritchard said. "His experience, and his experiences, are invaluable and we felt his demeanor is something we needed. He will have a voice on this team, and he will demand things out of the team."

Pritchard said he intends on entering the season with a full roster of 15. The final spot will be decided in training camp between three to five free agents Pritchard will bring in. Pritchard said he will reveal those free agents early next week and said the invitees will be a mixture of guards, forwards and centers. Training camp begins on Sept. 28 with media day and a team dinner.

Can anyone explain this?

Jay Jensen is at the airport wearing baggy shorts and black socks bumping Hail to the Victors on his boombox.

PORTLAND, Ore. - The Portland Trail Blazers have signed free agent forward Juwan Howard to a one-year contract, it was announced today by General Manager Kevin Pritchard. Per team policy, terms of the deal were not disclosed.

"Juwan Howard will add a wealth of experience and veteran savvy to our young, talented roster," said Pritchard. "We look forward to Juwan's contributions on the court and in the locker room."

Originally selected by Washington with the fifth overall pick in the 1994 NBA Draft, Howard garnered All-Rookie Second Team honors in 1994-95 and earned a spot on the Eastern Conference All-Star team in 1995-96.

Howard averaged 17 points or more and seven-plus rebounds in each of his first five seasons in the league. He has tallied 188 career double-doubles.

The Chicago, Ill., native has appeared in the NBA Playoffs four times, averaging 9.8 points, 5.7 rebounds and 1.2 assists in 23 games.

A member of the "Fab Five" at the University of Michigan, Howard was named Third Team All-American in 1994 after averaging 20.8 points and 9.0 rebounds in his junior season. Howard then entered the NBA Draft, becoming the first NBA player to leave school early and graduate on time.

Howard becomes the 14th player on Portland's roster. He will wear jersey No. 6.