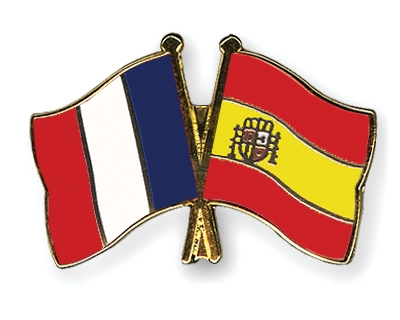 You can feel the intensity leaking off Casey Holdahl's blog post as he hotly anticipates today's big time EuroBasket showdown between Spain and France.

Spain v. France is a classic clash of experience versus youth. Spain isn't an old team by any stretch, but the core group of Pau Gasol, Juan Carlos Navarro, Jorge Garbajosa and Felipe Reyes has been playing together at EuroBasket since 2001, with the likes of Rudy Fernandez, Marc Gasol, Carlos Cabezas and Alex Mumbru all returning from the 2006 World Championship team. They've played in big games. They can handle the pressure.

The French, at least as it pertains to the current roster, are the exact opposite. This is the first time this group, with Tony Parker, Boris Diaw, Nicolas Batum, Ronni Turiaf and Florent Pietrus have played together for an extended period of time. You could look at that one of two ways. The positive spin is that they're young and still, in some respects, getting to know each other, so they're likely to improve every game. The flip side is that they've never been in this situation before as the favorites in the knockout round against a team most observers would consider the second best in the world...

jay aych over at The Painted Area chimes in with a must-read preview as well...

Think France matches up well on the perimeter, and Batum's size could give Navarro trouble. But I have serious questions about how the French big men defend on the block. They're giving up some size to the Gasol Bros. and they have a tendency to pick up fouls. Though, putting Pau on the foul line might not be a bad idea.

Have to go with the Spaniards in this one. France will need to prove they can knock down a good rate of perimeter jumpers to have a chance. If France can find a way to keep the Spanish defense honest, then they can make things interesting.

But to boil this down to bloodsport simplicity... In the red/yellowish corner: Rudy Fernandez and Victor Claver. In the red/blueish corner: Nic Batum.  It was truly fascinating to see how evenly split you guys were over which side to root for.

The game tips at Noon Pacific so you've got just a little less than two hours to burn.  Until then, I imagine you'll probably just be gazing at Rudy in Spanish Esquire.

To watch the game: ESPN360.com.  If you've never used it before, I recommend going through the setup process early and giving it a test run prior to noon.  If you've got other links to the video or audio of the game, please drop them in the comments of this thread.

Share your in-game thoughts, observations and play-by-play calls below. I'll be watching/commenting along with you.