Update (5:05PM): A team official has clarified to Blazersedge that Hersey Hawkins will essentially be replacing Chris Bowles, whose position was called "Director of Player Programs."  Bowles is still with the organization, however, and has moved over to take on an "expanded role within the Community Relations department."

From the out of left field department, the Blazers have sent out a press release announcing that Hersey Hawkins, former NBA player, has been hired as the team's new Player Development Director.

Here is a picture of Hawkins standing at a podium, addressing what appears to be the Iowa Corn Harvesters of America national conference. 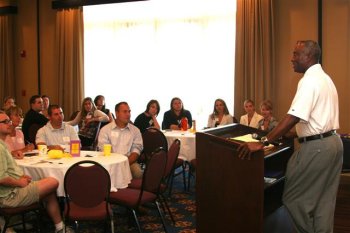 Interestingly, Hersey Hawkins' son Corey is headed to play basketball at Arizona State with Hawkins' former teammate Nate McMillan's son Jamelle. The Blazers drafted one of Jamelle's former teammates -- Jeff Pendergraph -- in the second round of this year's draft.  Employing the transitive property, you can expect to see the Blazers use a second round pick on Corey Hawkins in the 2014 NBA draft. Book it.

"We're very excited to be adding a person of Hersey Hawkins' character and stature to our team," said Pritchard. "He brings wisdom and a wealth of experience both on and off the court. Hawk was the consummate pro as a player and will play an integral role in the off-court development of our players."

In his new position with the team, Hawkins, 42, will be a resource to support each player's professional, social and personal development. He will help build strong relationships with players, their families, agents and business associates. Hawkins will also work closely with Basketball Operations, player representatives and the Trail Blazers' business departments to help build and maintain strategic partnerships.

"To be joining one of the best franchises in sports is extremely exciting for my family and me," said Hawkins. "They have a great nucleus of players there and Portland fans support their team like no other, and that made it a very compelling opportunity."

As a senior at Bradley University, Hawkins led the nation in scoring (36.3 pts) and is one of only seven NCAA Division I men's basketball players to score 3,000 career points.

He was the sixth overall pick in the 1988 NBA Draft and played 13 seasons for the Philadelphia 76ers, Charlotte Hornets, Seattle SuperSonics and Chicago Bulls.

Hawkins partnered with Nate McMillan in the SuperSonics backcourt when Seattle took on the Chicago Bulls in the 1996 NBA Finals.

Among his many career accomplishments, Hawkins also won the 1999 NBA Sportsmanship Award.

Since retiring from the league in 2001, Hawkins has split his time as a TV analyst for NBA and college basketball broadcasts and as an assistant basketball coach for his son's team, Estrella Foothills High School in Goodyear, Ariz.