Share All sharing options for: Andre Miller Is Honest

Nice scoop here from Brian T. Smith of the Columbian, as he quotes Andre Miller with some raised eyebrows about the whole starting point guard situation. 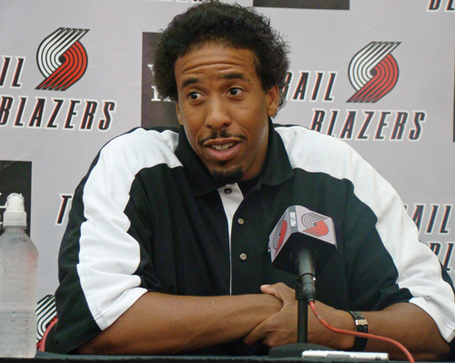 "I mean, I'm going in there as the starting point guard - there's nothing else to it. Steve Blake is a great player ... he's done a good job. And I look at it as a challenge. Nothing is handed to you. So I have to go in there with the right attitude, knowing that, this is a point guard spot that is going to have to be battled for. I think I've earned the right in this league as a point guard to be a starter. I just have to go and prove it again.

If they were sitting here and saying ... you're bringing in a Jason Kidd or a Steve Nash or a Baron Davis, would they be saying the same thing? Probably not."

Hit the link above for the full quote.

Miller sounds motivated, focused and, most importantly, realistic in his self-assessment. Three thumbs up.

Steve Blake couldn't be reached for comment. He was too busy swinging the ball around the perimeter.