Who is this guy with the mischievous smile? 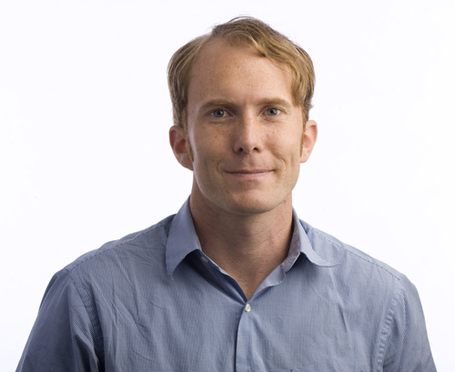 Why, it's Brian T. Smith, the new Blazers Beat writer for the Vancouver Columbian.  As you read first here on Blazersedge, his predecessor, Brian Hendrickson, recently moved out of state.  Enter The New Brian, who officially started work for the paper last week.

I caught up with The New Brian via email so that we can have a headstart in getting to know the newest adddition to Blazers Media. Click through for our lengthy conversation, in which we discuss his career path, what's missing from Blazers coverage, the funniest complaint he's received, and whether investigative reporting, one of his specialities, is a dying art.

Blazersedge: Your most recent stop was in Tennessee but I understand you previously worked for The Columbian. Can you briefly chart your career for us?

My first full-time sports writing gig was for The Columbian. I previously worked at the paper from August 2006 through September 2007, primarily covering high school, small college, semi-professional and pro sports. I was hired by the Bristol (Va./Tenn.) Herald Courier in October 2007 and was employed there full-time as a sports writer and assistant sports editor until June 2009, when I entered a Master's of Education program at Milligan College. I left the M.Ed. program when I was offered the opportunity to return to The Columbian as the paper's Portland Trail Blazers beat writer.

I entered the newspaper business during the summer of 2005 as a college reporter while attending Portland State University. I worked for the Daily Vanguard for about a year as a sports and music writer. During that period, I covered the Portland Trail Blazers throughout the 2005-06 season. At the same time, I participated in an internship at the Statesman Journal in Salem, Ore. I also freelanced as a sports writer for The Oregonian and the Associated Press, and as a music writer for The Oregonian, Portland Mercury and PDX Monthly.

Blazersedge: I read that you won a sportswriting award in Tennessee. Can you explain the series of investigative articles that earned the awards? Some say that investigative reporting is a dying art -- agree, disagree, or?

I won several writing awards while employed at the Herald Courier, including back-to-back Associated Press Sports Editors awards. I received several awards, including an APSE, for a nine-part investigative series that documented events surrounding East Tennessee State University's decision to eliminate its football program in 2003 and the fallout from that decision. A three-part investigative series documenting ETSU's subsequent move to the Atlantic Sun conference from the Southern Conference won the award you're referring to.

As for investigative reporting, I believe it's still alive and thriving. It's an integral component of what makes newspapers -- and the best aspects of new media -- essential reading. Granted, some of the most important components of strong investigative reporting -- seasoned reporters, veteran copy editors, time and monetary resources -- have obviously taken a major hit in recent years as newspapers have seen their profit margins shrink and have resorted to layoffs and cutbacks to offset losses. But many of the major sports and news stories that have recently dominated regional and national media coverage have been investigative reporting-based stories, which I think shows the importance and viability of the art form.

Blazersedge: Why make the change to cover the Blazers. What motivated your return to Vancouver?

It's an honor to cover a pro beat, and the next few years of Blazermania should be a fascinating period to write about. I remember following the team throughout the Drexler-Porter-Duckworth-Kersey-Williams era as a kid while growing up near New Orleans. I also followed and covered the team while previously living in Portland from 2001-07. Also, Portland is my favorite city in the country. And The Columbian is an excellent paper with a great sports staff. So it was pretty much a no-brainer.

Blazersedge: Hendrickson seemed like the paper's one-stop shop for all things Blazers, stats, blogs, features, even the occasional video. Do you plan to pick up right where he left off or take the beat in a new direction? How much of your work will be focused on internet coverage versus coverage in print?

Brian Hendrickson did an amazing job covering the Blazers for The Columbian as a one-man show competing daily with the resources and talent of The Oregonian. He is also a great friend and an excellent mentor. I plan to build on what he created, while also bringing my own approach, ideas and writing style to the beat. Internet coverage and the Blazers Banter blog will be a major focus of my coverage, but I'm also going to concentrate on enterprise pieces, analysis and in-depth features that will have a home in the print version of The Columbian.

Blazersedge: Hendrickson was very much a "let the story tell itself" type of writer. What's your style like?

The same. I'm a reporter and a writer, not a media person. I'd much rather read a well-written, well-reported story than anything else. Television and radio definitely have their place, as do talking-head type writers -- it's a big, busy world and everyone has a voice. But I think there's an art to good, straightforward, old-fashioned reporting, and I'm proud to have a job in the modern world as sports writer working at a print-based newspaper.

Blazersedge: What do you anticipate being the biggest difference in transitioning from covering a college to covering a professional team?

The separation. In college, everything -- coaches, players, administration, etc. -- runs through a sports information director.

On a pro beat, it's different and a little more complex, primarily because of the separation between players, team representatives, agents, etc. Pro sports are a big business, and it becomes obvious the second you try and track down a player or a coach for a quote during the offseason. This said, the Blazers are known for having an excellent and very helpful public relations team, so it's hard to complain.

Blazersedge: If there's something that's been lacking from Blazers coverage that you've seen what would it be?

Good question; hard answer. The Oregonian's Jason Quick and John Canzano are one of -- if not the -- best beat reporter/columnist teams in the country, while Joe Freeman and all the other contributors at that paper do a great job. Then you have a variety of well-run, intelligent blogs, the Portland Tribune, radio, TV, the Willamette Week, etc. That's a lot of coverage for a mid-major market. But it also makes sense, considering the history of the Blazers, the rebirth of Blazermania and the fact that the Blazers are now the only NBA franchise on the West Coast until you hit the Bay Area. (Hint: Seattle needs an NBA team.) This said, despite all the stories that are written and all the news/drama that gets pumped out on a daily basis, it still seems like there are holes in the overall coverage. If anything, I'd like to read and see more in-depth reporting and feature-based stories. But the NBA season seems to get longer and longer each year, and the continual move toward 24/7-based news is not a fad. Thus, it's hard for a reporter in any medium to balance lengthy, in-depth pieces with the challenge of day-to-day reporting.

Blazersedge: Prior to your hiring there was some discussion about indecision regarding the paper's commitment to continuing to cover the Blazers. Did you get that impression during the interview process?

I didn't. All I've heard since the job opened is that The Columbian is committed to providing its readers with consistent Blazers coverage.

Blazersedge: If we were to read your complaint emails or listen to your angry voicemails what do readers take issue with you about? What's the funniest complaint you've ever received?

Sports fans are very passionate and protective, so any personal complaints or angry voicemails have usually concerned an issue or an event that a fan saw differently than I did. As for the funniest complaint, more than a few are tied for No. 1. But it's hard to top working in the office and answering a late-night general sports call from a drunken, elderly fan wondering why your paper doesn't have more Atlanta Braves coverage, when the Braves play five hours away and are located in a different state than the newspaper receiving the complaint.

Many thanks to Brian T. Smith for taking the time to speak with Blazersedge.

And be sure to check out his Blazers Banter Blog.