Share All sharing options for: Let's Talk About Martell Webster 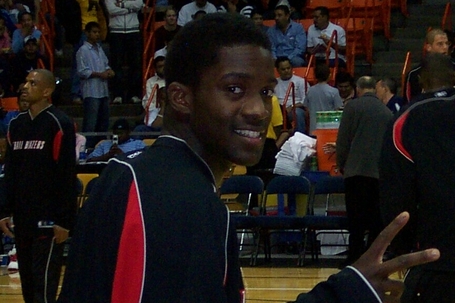 Now that we're in the month of August and the start of the new regular season is closer than the end of the last one it's time to address one of the bigger roster issues facing the Blazers this year:  what the heck to do with Martell Webster.

Having done this for a number of years now to me it seems like just yesterday that Martell was the franchise's most promising rookie, destined for stardom.  In and after his first year in the league he was considered all but untradeable, for a team in Portland's situation anyway.  Now, four years later, Webster is coming off of a season-ending injury into a muddled roster spot boasting a semi-spotty résumé himself.  If there's a bigger question mark on the team than what's going to happen with Martell I'm hard pressed to identify it.  The possibilities range all the way from earning the starting spot to getting traded.

Let's look at Martell's strong side first.  If you take the corner and sideline looks that Nicolas Batum saw last season and give them to Martell on a regular basis the other team is dead.  If he's that wide open Webster is going to hit a bunch of shots, most of them from three.  Other teams will not be able to sag off of him, leading to less pressure in the interior, making Martell a valuable offensive asset no matter how many points he scores.  Webster also has good size for his position.  His game has taken leaps and bounds since that rookie season.  He's actually transformed from abysmal to adequate in his understanding of the game and his ability to play defense.  You see more rebounding effort out of him than he once evidenced as well.  He's got a valuable skill, he's got effort, he's got potential, and he's got size.  This sounds like a guy you want to give minutes to.

Flipping the coin, Martell is not, nor will he ever be, the defender that Nicolas Batum is already.  We're praising him for staying in front of his man.  When that's an achievement, you know you started pretty low.  Martell has become more aggressive off the dribble as he's grown older but he's still only able to finish when there's a straight, unbroken line between him and the hoop.  There's little or no left and right to his game.  His handle is still spotty.  He's neither a creator nor a passer.  He seems destined to be more than just a weak-side shooter but he's not the kind of guy you can rely on to show consistency in more than shooting from the weak side.  And the more this team wants to win at an elite level the more it's going to need and value consistency.

Conflicted feelings about Martell's game aside, he's also trying to re-emerge into the most stacked position on the team.  He hasn't proven himself any kind of shooting guard and even were he to show those traits he can't find minutes around Brandon Roy and Rudy Fernandez.  Coach McMillan has experimented with Martell at power forward in small lineups before but that's not a sustainable option and those minutes are precious as well.  Seemingly cemented at small forward, Martell joins a corps featuring last year's starter and the primary bench player for this team over the last couple of seasons.  There's not going to be a simple, bloodless solution for that traffic jam.  Somebody's going to win minutes and somebody else is going to sit for long stretches.  It's hard to imagine Martell being left on the bench if healthy.  On the other hand if you want defense you're going with Nicolas Batum.  If you want offense you're probably more comfortable with Outlaw at this point.  Martell has skills in each area but he could play second fiddle in both.  On the other hand that balance and experience could be just what the starting lineup needs.  Yeesh.

I must admit that I'm rather at a loss as far as predicting what will happen with Martell.  I am not sure what I, myself, would do with him.  My suspicion is that the coaching staff and management, like all the rest of us, are waiting to see how the roster battle plays out.

I am reminded here of a Food Network show called Chopped.  The premise is four professional chefs cooking against each other using 3-5 mystery ingredients that are usually ill-matched and of which they have no foreknowledge.  The key factor is time.  They are given 20-30 minutes to complete each dish, period.  This roster situation feels like there's 10 minutes left in the round and we're staring at one of the ingredients we haven't used yet...one that takes 25 minutes to cook properly.  The plate is set otherwise except we're required to throw in this last thing and we have no idea how to integrate it without dominating the dish and there's no time to treat it well.  Chefs who get into that situation on the show usually end up throwing a lightly-salted piece of licorice on top of their mashed-potato entrée and praying.  I'm wondering if the Blazers won't take exactly that approach.

Solve the mystery for us.  What will happen with Martell this season, provided he's healthy.  How will he be used, if at all?   How can he help the team and what is the potential for disruption or displacement?   What do you do if you're Coach McMillan?  Let us know below.